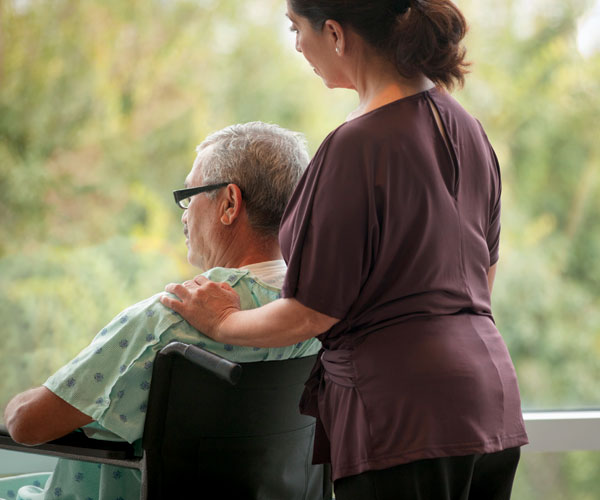 Tauba Spiro is no give-and-go philanthropist. Instead, the pleasant woman enjoying lunch at the Spiro Family Garden on a second-floor rooftop
at Toronto’s Baycrest Health Sciences – or at the Max Tanenbaum Garden, high on the 16th floor of the Princess Margaret Cancer Centre – often quietly savours the pleasure patients, their families, their friends and staff members find in the gardens that she and her family have initiated and maintain.

Spiro and her husband, Rabbi Solomon Spiro, were inspired to build the first garden when they stepped off an elevator at the Princess Margaret and beheld a vast rooftop on the 16th floor. Designated as garden space, budgetary restraints had left it covered in gravel instead. “That night,” Spiro recalls, “Sol said, ‘I would love to build that garden.’”

They never considered anyone but landscape architect Neil Turnbull, who had designed the small plot they delighted in off their breakfast room. He understood a garden’s power to comfort. His elder daughter, now 32, had been diagnosed with a brain tumour at the age of eight and had had months of treatment at Toronto’s Hospital for Sick Children, deep in the city’s busy core. “You’re kind of trapped with doctor’s appointments,” Turnbull recalls. “We tried to spend as much time in natural places as we could, but in reality, we had to be on call all the time. Had we had a garden … it would have been a lovely place to sit and catch up.”

A garden in a healing environment has special design demands, including safety (physical, chemical and allergic considerations) and access. Plantings need to be raised, so they can be enjoyed by people in wheelchairs and even beds. “A lot of sensitive conversations happen, either between doctors and patients, family and patients or family and doctors,” Turnbull says, so plans for the garden incorporated intimate spaces.

The Princess Margaret Centre’s 8,000-square foot Max Tanenbaum Garden honouring Tauba Spiro’s father opened in 1999. Everything, including tons of soil, had to travel up in passenger elevators before the hospital opened at 8 a.m. The hexagonal planters and diamond-shaped decking of ipe, a Brazilian hardwood, were cut and fitted at Turnbull’s Hedgerow Farm, near Sunderland, Ont., over 17 months and assembled in four months on site.

Ron and Lynda Baird created the Chapel structure, three stainless steel chain-mail roofs inspired by the form of the datura flower. Cloud-like billows of stainless steel disks form a pavilion (added in 2000) that keeps rain off and provides shade for cancer patients, who are acutely susceptible to sunlight. Open annually from April 1 to Nov. 30, it’s popular with staff, visitors and patients. It’s also where you’ll find Tauba Spiro listening to cool Jazz for the Soul at noon on Fridays during the summer, a music program she initiated.

Turnbull’s crew buzzes in three times a year with new plants. “I think it’s a celebration of life,” Turnbull says. “Peonies, when they bloom are a celebration. In springtime, we fill the beds up with minor bulbs like grape hyacinths and thousands of little violets and various forms of Johnny-jump-ups and pansies.

There’s always something about spring flowers that gets to you,” he smiles. In winter, the Hedgerow crew fills planters with displays of evergreens and colourful boughs brought from the farm. Add snow, and the space becomes a sculpture garden. Spiro points out that the palliative care windows overlook the garden.

Patients, she says, “feel there’s something special for them and their families. It always looks nice.”

At Baycrest, the Spiro Family Garden, opened in 2007, honours Rabbi Spiro’s parents and sister. Elderly residents and long-term care patients revel in time shared outdoors with family and other visitors in fresh air amid thousands of flowers, shrubs and even trees. A soaring steel and aluminum sculpture by Ron and Lynda Baird shades seating. Turnbull again used ipe hardwood for its 12,000 square feet of patterned decking, the planters and virtually wind-proof furniture (the dense rot-resistant wood weighs more than water). He planted a 3,000 square-foot green tapestry atop a protruding four-foot high roof.

Linda Jackson, executive director of residential and aging at home at Baycrest, says, “They were very strategic in the types of plants they chose … different plants come to life at different times of spring, summer and fall.” The site is visible from the nursing home, research institute and hospital, so people enjoyed watching the garden’s construction. For staff and residents, she notes, “It’s a nice place to bring lunch and sit outside and feel the breeze on a nice day.”

Recent studies validate the observation of Frederick Law Olmsted, the great designer of New York City’s Central Park, that viewing an impressive natural scene is good for human health and vigour. In fact, nature seems to be able to re-set the brain, even reviving its ability to focus. Marc Berman, a scientist at Baycrest, says it also improves memory. Other research has noted a falling off of aggression and better health in surgical patients.

“Until you experience it under different circumstances, you don’t realize the benefit it has,” Spiro muses. “There’s something about flowers and plants and the sky and the air.” She pauses and then says quietly, “I know how my heart feels when I walk into these gardens. I’m very thankful we’ve been able to do this.”

Right from the get-go, Toronto’s new Bridgepoint Active Healthcare – built to replace the tired original hospital beside it – aimed to go green to optimize patient health. Here, nature isn’t an add-on. Marian Walsh, president and CEO of the hospital, stresses, “We want people to benefit from the healing effects of nature, not to feel isolated by their health problems. Nothing here is accidental or ornamental. It all has a meaning: to call people to life.”

Rooms allow each patient to see sky, parkland or the broad Don Valley. They can also walk or be wheeled on an outdoor labyrinth, a site for quiet contemplation based on one at the medieval Chartres Cathedral in France. Its path mirrors a journey to one’s core and subsequent return to the world. The heart soars with the expanse of sky visible from the 10th-floor Harold Ballard Foundation Garden. Glazed windscreens and a wooden canopy offer shelter, but patients gain exercise by walking its rooftop path.

The spirit calms at the sight of terraces such as the Susan Arthur Terrace, visible from the indoor therapeutic pool and patient rooms, or in landscaping at ground level that breaks a barrier between patients and community. Walking and biking paths connect hospital and adjoining Riverdale Park; benches offer a breather.

Planting is underway, using many drought- and heat-resistant native trees and plants that shelter birds and butterflies and provide a source of beauty in every season. And all this planned loveliness has a bonus in terms of health-care costs: lower patient stress and anxiety equals fewer expensive days in hospital.