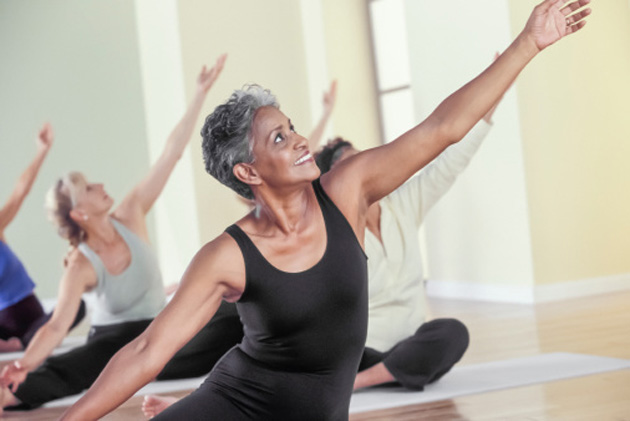 When I found myself lying on the floor of a colleague’s office one day in 2012 unable to get to the washroom because I was so faint from [monthly] bleeding, I figured something must be seriously wrong. But the amiable emergency room doctor I saw diagnosed my problem as simply “a wonky period,” explained with a quick fluttering of his fingers raised in mid-air.

What he also explained was that I had, at the [ripe] age of 47, entered the “run-up” to menopause, otherwise known as perimenopause. In other words, I had joined the “parade of baleful, bloated middle-aged women” that Sandra Tsing Loh eloquently described in her article in The Atlantic last year entitled “The Bitch is Back.”

The good news is that even though there is a long list of symptoms (as many as 34), they are usually relatively short-lived, not that severe and not experienced by everyone. A 2012 survey of 810 women between the ages of 45 and 60 found that half of the women had menopausal symptoms, from hot flashes to night sweats, interrupted sleep, mood swings, low or no libido and irregular periods – 69 per cent of which negatively affected their lives.

Less than a third of those surveyed who had symptoms were treated, likely because, as Dr. Donna Stewart, senior scientist and director of women’s health at the University Health Network in Toronto says, “Most people sail through menopause without a lot of problems or they have a lot of minor symptoms that don’t require treatment.”

Erratic and unpredictable fluctuations in estrogen are responsible for the symptoms of perimenopause, with estrogen (and progesterone) plateauing at very low levels once we reach menopause (a year after the last menstrual period).

Symptoms usually occur from several years before the last menstrual period to several years after it, normally from our late 40s to early 50s, before our periods subside by menopause (except for vaginal dryness, which tends to gets worse). So by your 60s, 70s or older, you should be free of most of these unpleasant effects.

Although it’s not unheard of for a woman in her 80s to get the odd hot flash, these are usually milder and less frequent as women get older, says Dr. Margery Gass, executive director of The North American Menopause Society.

And how much of what we’re feeling can we put down to our hormones? After all, most of us face many other changes at this time: our kids may be entering adolescence – or leaving home, we may be having health issues (or taking care of our partners or elderly parents) or stock-taking about career issues, possibly going through a divorce or witnessing a partner’s infidelity. Any of these can take their toll, so the mood swings, late-night snacking, sleeplessness and ill temper (was that a slipper I threw across the room?) can also reflect a righteous anger.

Experts like The Wisdom of Menopause author Christiane Northrup, however, see this new developmental phase in a positive light – as a time when we can let go of endless caregiving and self-sacrifice and focus more on what we want, using our creativity, passion and the wisdom of our intuition to guide us.

So what to do?

Make time for yourself: do yoga, pamper yourself with a massage, exercise, eat well, but not too much – dietary needs go way down as we age and we gain weight way more easily, an annoyance apparently unrelated to our hormones or hormone therapy. While naturopaths and homeopaths will offer many other complementary therapies for the symptoms, double-blind studies don’t yield the results we would hope for. Unfortunately, there are “no magical products in terms of alternatives, foods or supplements,” Gass says.

Is the building on fire?

One Toronto business executive describes stripping off her jacket in meetings, asking her colleagues if they’re hot, and then using a tissue to mop the rivers of sweat streaming down her cleavage. Hot flashes are the most common and notorious symptom women report – and the butt of many a joke in men’s locker rooms. Stewart says they can be partly blamed on the brain’s hypothalamus having difficulty in regulating body temperature.

And then there are night sweats.

What 54-year-old Montreal store manager and jeweller Cynthia Hawkes describes is classic: she wakes up in the night to throw off her covers because she’s having night sweats or is just hot. Once awake, she finds it hard to get back to sleep and is then tired at work the next day. Experts differ as to whether disrupted sleep is the result of hormones, the effect of night sweats, or of changes related to getting older and being stressed or depressed.

Dr. Petra Selke, a clinical associate professor at the University of British Columbia’s Department of Obstetrics and Gynecology,sometimes prescribes progesterone tablets or skin cream (applied where the skin is thinner, such as the inside of the arms and thighs, and lower abdomen) to promote healthier sleep.

Selke says hormone therapy is the most effective remedy for treating hot flashes. It involves a combination of estrogen and progesterone, if the woman has not had a hysterectomy, or estrogen alone if she has had her uterus removed (if progesterone is not included with estrogen, a woman with a uterus has an increased risk of developing endometrial cancer).

Hormone therapy is usually prescribed as a daily pill, as a patch that the woman wears three to seven days, or as a gel she can apply. Vaginal rings and creams containing estrogen are not usually effective for hot flashes, Selke says, since very little of the hormone enters the bloodstream.

A 2002 study by the Women’s Health Initiative, however, raised terror in many women and their physicians when it suggested that hormone therapy increased risks for breast cancer, heart disease and stroke in women aged 50 to 79. Many women went off the drug as a result.

“But for typical users, in their late 40s and early 50s, who begin using hormone therapy close to or at the time of menopause [rather than many years after], it’s generally very safe,” says Selke. “Most women will use hormones two to five years and then find that symptoms are manageable enough to stop taking the drug. Those with milder symptoms would not be prescribed it in the first place.”

Some women will instead opt for what many consider to be a natural hormone therapy alternative, called “bio-identical” hormone therapy, an estrogen-based medication compounded in a pharmacy to be identical to the hormones that the human body produces. Unlike conventional hormone therapy that contains the one main estrogen – estradiol – that our body produces, the bio-identicals also include smaller amounts of two other estrogens  – estrone and estriol – which our bodies also produce, but which Selke says are “only weakly biologically active” and about which less is known about their long-term safety. Indeed, the Society of Obstetricians Gynaecologists of Canada and the U.S. Food and Drug Administration (FDA) and others advise that custom-mixed compounds lack long-term testing data regarding safety and effectiveness.

And my scary trip to the ER? Intense fluctuations in the length and frequency of periods before menopause commonly occur, but my mum never told me that heavy bleeding, or “flooding” is far more likely and can be very debilitating. (Clearly the reference to “menopause” has no immediate relationship to blood flow.)

Some women decide to use Cyclokapron (tranexamic acid), a non-hormonal medication they take during their period only (rather than throughout the cycle) to reduce blood flow, says Selke. A non-hormonal treatment involves heating or freezing the lining of the uterus; or, if there are no contraindications, a low-dose oral contraceptive or a progestin-containing IUD, which may eliminate periods altogether. (If the pattern of bleeding becomes heavier and more frequent, doctors recommend ruling out fibroids, polyps, uterine pre-cancer or endometrial cancer before getting treatment.)

Whether memory problems are symptomatic of menopause is controversial, but “word finding” (as opposed to not remembering what happened yesterday) is not quite as efficient during this transitional period,” says Dr. Donna Stewart.

As retired B.C. principal Barbra Paterson, 61, describes it, “memory lapses certainly invaded my being. I’d be speaking with someone when I would completely lose my train of thought, or a word that had absolutely no relevance at all, like “lampshade” would fly out of my mouth. I’d just shake my head and admit to a menopausal moment!”

A large National Institute of Health-funded study that has been following 3,000 women over more than 15 years at the University of California, Los Angeles, found a “subtle decline in cognitive performance.” Thankfully, cognition returned to baseline when women hit menopause.

The news isn’t so good with vaginal dryness, which contributes to painful intercourse, bladder irritability, and bladder and vaginal infections. But low-dose vaginal estrogen, available in prescription vaginal creams, a vaginal ring or simply a lubricant can help – as can sex.

“Stay regular about sexual activity as you would for other physical activities,” Gass advises. If you hit menopause and choose not to use hormones and are not sexually active, the vagina can constrict – and this can be harder to reverse. Another case of “use it or lose it.”