CPR: What You Need to Know 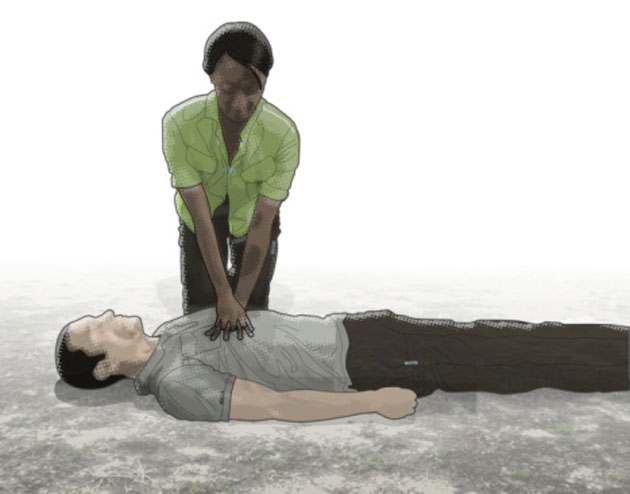 Not trained in CPR? Do it anyway. Hands-only chest compression is enough to save a life

It’s long been known that cardiopulmonary resuscitation — or CPR for short — is key to saving lives when treating cardiovascular emergencies, particularly sudden cardiac arrest. However, in an emergency many people don’t know how to do it — and people’s lives may be at risk when there isn’t a trained professional on hand.

That’s why the guidelines for this life-saving procedure were changed several years ago — and for those untrained in CPR, the technique was simplified. In a nutshell: To save someone’s life, you no longer need to know how to perform mouth-to-mouth — just push hard and fast on the chest.

Why the change? Research suggests that ‘hands-only’ chest compression by bystanders is enough to save a life, according to the American Heart Association (AHA). Previously, CPR procedure emphasized the ABCs of Airway, Breathing and Compressions — which meant that when giving CPR you had to remember the recommended 30 compressions-to-two breaths ratio of traditional mouth-to-mouth resuscitation.

Now, even for those trained in conventional CPR methods, experts say the priority should be to focus on chest compressions first to keep the blood — and the oxygen in the blood — flowing to the heart and brain.

The 2010 guidelines, published in Circulation, focus on the simple instructions to “Push fast and push hard” on the center of the chest. These recommendations — meant to encourage the average, untrained person to feel confident enough to give CPR in an emergency — also apply in Canada.

In the past, many people held back in giving potentially life-saving CPR because they were afraid of making mistake or causing harm, experts say.

“For a variety of reasons, when someone suddenly collapses in cardiac arrest, people often don’t start any type of CPR, and one of the barriers, we believe, is that people think it’s fairly complicated to do CPR,” Dr. Michael Sayre, co-author of the new guidelines and chairman of the American Heart Association’s emergency cardiovascular care committee, told HealthDay news. “But chest compressions alone are easy, and anyone can do it,” he said.

“Chest compressions actually act like an artificial heart, pumping blood to the heart and brain,” Sayre noted. “And, that blood often will have a reserve of oxygen.”

The guidelines follow a number of studies in the past year that suggest a compression-only approach is as good or better than compression plus mouth-to-mouth.

NEXT: WHAT YOU SHOULD DO

So what should you do if you witness someone collapse or experience sudden cardiac arrest? The American Heart Association recommends that if an adult is unresponsive and not breathing or is having occasional unusual breaths that sound like gasping, any bystander should first call 911 or emergency services and then immediately begin chest compressions.

If other people are nearby, send them in search of an automatic external defibrillator (AED) — a device that can shock the heart back into normal rhythm. Many public places such as recreation centres and arenas now have them.

“To give the victim the best chance of survival, three actions must occur within the first moments of a cardiac arrest: activation of the EMS [emergency medical services] system, provision of CPR and operation of a defibrillator,” the guidelines state.

According to the new Hands-Only guidelines rescuers should:

— Give chest compressions — with one hand on top of the other, fingers interlaced — at a rate of at least 100 times a minute. Remember the 1970’s Bee Gees song called Stayin’ Alive’? Experts say an easy way to remember how fast to push is to move with the beat of the song.

— Push deep and hard on the center of the chest, compressing at least two inches in adults and children and 1.5 inches in infants. (Note: While the new guidelines do apply to adults, children and infants, they exclude newborns.)

— Avoid leaning on the chest in between compressions to allow it to return to it starting position.

To see a demonstration, watch the video :

Trained rescue workers have also been issued new guidelines. Instead of following what is know as the A-B-Cs of CPR — which stand for airway, breathing and compressions — the American Heart Association now suggests rearranging the order to C-A-B – starting with compressions and then airway and breathing. According to the AHA, chest compressions are vital to keep the blood circulating — and by starting with the airway and breathing crucial seconds which could save a life were being lost.

READ MORE
Cardiac Arrest: What you need to know
Heart attacks: His versus hers
Chest pain: serious or benign?