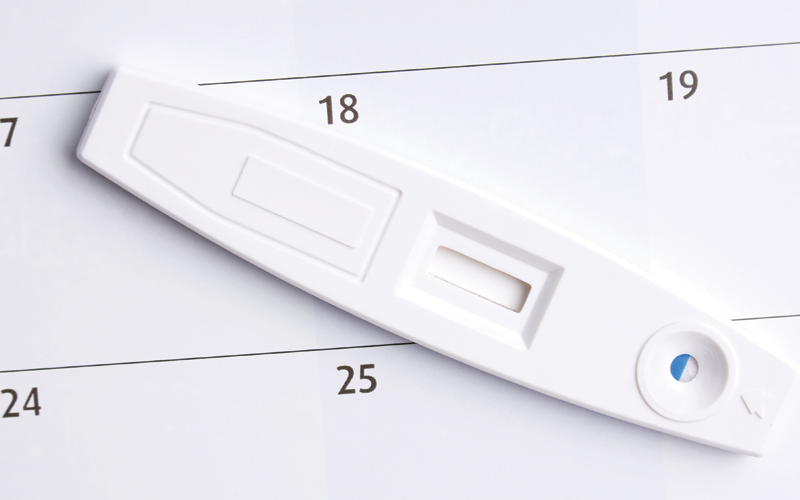 Your mother went through it. So did your grandmother, and so on. Yet, for many women, the first signs of this natural progression come as a shock. Here, a 40-something considers this life stage

Missing: A dropped period at a certain age could mean one of two things: you’re pregnant or you’re perimenopausal.

“Pour us some wine …” I replied, engaged in the more pressing task of scraping candle wax off my coffee table. My houseguest was a longtime friend and newly minted Married Lady and Mother of a jovial toddler.

“Oh … I get it,” she said, returning from the kitchen with a bottle of burgundy. “You just don’t want to know until after our cocktail party on Friday.”

“Guilty,” I said, clinking her glass and exhaling a plume of cigarette smoke. “Though it occurs to me, if I keep up this pace, I may be gifted with self check-out …”

This was just my black humour. Or was it? With my cycle nearly a month late – the week I was turning 45 – the only thing that seemed certain was my utter ambivalence. I’d spent my late 20s to early 40s with a man who didn’t want children and had always rued that loss, having frittered away my baby years. Yet now, presented with the possibility, I found myself wondering … was this a birthday gift I even wanted? Or, more to the point, wanted now?

It was hard to say. Context really is everything. On the relationship front, with “madly in love with a kind, handsome millionaire” presenting the ideal set of circumstances, I was several pegs down that ladder. The culprit was a scoundrel I’d dated briefly, recently ditched and could not sanely imagine anchoring myself to for 20 years of “co-parenting.” Instead, I pictured him counting back from nine when he ran into me holding a baby I hadn’t mentioned while I sputtered something about a sperm bank and being late for an appointment. With Father firmly in the Con section, I moved on to Finances. “Freelance journalist-single mother” sounded like a bad Tina Fey script. Though my mummy friends assured me that so long as you had free babysitting (read: eager grandparents), offspring were pretty cheap until they started demanding big-ticket items like designer clothing, dentistry and higher education. Conveniently, they pointed out, I already had a two-bedroom flat.

On the plus side, I’d have the Profound Adventure of Motherhood, the fundamental experience we’re placed on earth to have, be amazed, feel love like never before. I filed that under Pros. Conversely, putting my body through the terrors of pregnancy in my 40s meant I’d wind up with structural damage I might never repair; 20 extra pounds heavier for life unless I committed to daily grinds at the gym. I’d always joked that one upside of not having children was “keeping your tits.”

I’ll confess to a healthy vanity. The sort of woman who grew up pretty and clocks regular maintenance at the salon, nail bar and dermatologist, keeping dress sizes in the single digits, wearing heels. I’ve spent my whole life enjoying the pleasures of looking good. The wear and tear of not sleeping for two years after stretching my figure to balloon size wasn’t immediately appealing. That said, I love children, and moulding a small creature into an interesting adult held definite appeal, even if I had to live on a Stairmaster – and nix the cigarettes.

The real hitch, the one angle I could not picture myself gamely sacrificing, was my Freedom. By my 40s, I’d settled into a fairly carefree and nomadic lifestyle, my writing career skewing more and more toward a love of travel. With exotic adventure and exploring new places a central pleasure in my life, I’d spent years abroad. Jetting off for weeks at a time would be the first thing I’d have to relinquish if I were equipped with a papoose. Was this a reality I could accept? Reading Beatrix Potter instead of hot air ballooning over a Burmese village at sunset? Daily school runs over camel safaris across the Sahara? Waking up at six? I didn’t know. Even my housebound pleasures lay in peril. Cocktail parties that ran a little loud and late? Scratch those off the list. Entertaining lovers in the glow of my living room fireplace at all hours? Not anymore. Sleeping in? Undisturbed bubble baths? Elegant decor breakables displayed across every surface? Over, over and over.

I recognize that this line of reasoning comes across as exactly the sort of egocentricity that motherhood famously torpedoes with its enforced learning curve: selflessly placing another’s needs ahead of one’s own.

This was actually the one wholly unassailable argument I could come up with for having a child. Certainly a lesson I – anyone – could stand to learn. Then again, perhaps there’s no one path to fulfillment, and a rewarding life might also come from leading an existence over which you had ultimate freedom – to travel the world, to follow your whims, to sleep around, to sleep in, to simply spend uninterrupted hours reading.

Also, as one blogger noted in her 23 Reasons Why Not Having Kids Is the Best Thing Ever: “Sometimes kids do that thing where they just keep talking to you no matter how much you try to get them to respect your hangover, chill out and watch The Wiggles. And killing them at that juncture is not an option.”

Overall, I’d been quite thankful to live in an era that no longer viewed women who remained childless – by chance or by choice – as weirdo failures. As recently as two decades ago, non-mothers were still treated with awesome smugness. Check out Dear Abby, circa 1993, admonishing the childfree:

“They try to fill their lonely lives with dinner dates, theater, golf, tennis, swimming, civic affairs and trips all over the world … See what the years have done … She is slim, well-groomed and youthful. It isn’t natural. If they had kids, they’d look like the rest of us – tired, grey, wrinkled and haggard. In other words, normal.”

Yikes! Given that joyous spectre, no wonder stats for women without children have spiked over the last few decades. A 2011 Statistics Canada survey revealed that one-person households now surpass those composed of couples with children. A 2010 Pew Research Center study found that one in five American women now remains childfree; rates for those 40 to 44 who’ve never given birth swelling by 80 per cent since 1976.

Really, huge sigh, after centuries of feeling “less than,” women in the non-kid club have finally snatched back a little haughtiness of their own. That I might transform from “chic travel and style journalist” to “demented, food-stained mommy blogger” was not a small source of alarm. Not that righteousness on either side is admirable, but I’ll cop to swapping a few arch cracks with some of my more soigné childless chums. Ruing once urbane girlfriends who blather on about nothing but their offspring at parties, restrict “travel” to mega resorts with kids’ programs and reside with menfolk who chalk things like “Have sex with your husband” on the kitchen blackboard’s to-do list.

This was the back and forth in my head for almost a month – yes, no, maybe, of course not, go with fate, plot your destiny, don’t be insane, take a chance – the never-ending ping-pong of possibilities. All the while I avoided buying a pregnancy test, afraid of what the answer might be. I had to admit – my bohemian genes blended with an extra serving of rogue DNA on the “father’s” side – any child of this union could only be a reprobate. Raised with the laissez-faire parenting style I’d picked up from my mother (smoking hash while recommending good books), it would wind up in a rock band or on a crime spree. The odds were split pretty even. There was also the fact that, while firmly pro-choice, I’d never been compelled to make that decision and I was more than happy to keep it that way.

And, at this age, whatever the circumstances, if the answer was “yes,” could I afford to say “no”?

I was on the telephone with my mother running through all the angles for the 90th time when she remarked, “Perhaps you’re perimenopausal?” so casually I could hear her rummaging through her fridge at the same time. “Oh damn, I forgot the capers…” she added absentmindedly, “and I was going to make chicken piccata tonight.”

“Seriously, Mum? That’s your pep talk? I’m not pregnant … I’m just too old to get my period?”

Something I’d never given much thought to – my biological age – was now all I could think about. Not least as (negligent waxing being a leading luxury of singleness) I’d recently had occasion to note, then frantically weed, three white hairs: Down There.

Contemplating a missed cycle that was either my Last Ever Chance To Be Pregnant or The First Sign of My Ancientness, while plucking out the silver strands, my lady parts suddenly felt so Dorian Gray. The hidden truth – raisin ovaries! fading plumage! – in distinct contrast to the glossy outward veneer I kept 30-something sleek by attacking skin and hair maintenance like a drill sergeant.

Googling “perimenopause,” I read the raft of symptoms – loss of libido, incontinence, flatulence, rage, hair loss, depression, sudden tears – thinking, “Goodness, if I were going bald while peeing myself every time I laughed, I’d be a sulky, angry celibate, too …”

Dismissing that list, I cast a more wary eye on ailments I could claim: trouble sleeping, difficulty concentrating, forgetfulness, tinnitus. Hmmm. Then again, the first three could all be related, and I had spent much of my louche youth in noisy nightclubs – thus the mild tinnitus … possibly the random memory loss?

The answer arrived on the Saturday I turned 45. No need to pee on a stick. Happy birthday? Reaching for the Tampax, my feelings were mixed. Sheer relief that I wouldn’t be having a baby with the wrong man mixed with a slicing pang of regret that I wouldn’t be having a baby – ever. This was it. At the same time, it also marked the sole occasion in three decades on which I’d been pleased to have my period at all. If only as it proved that I wasn’t too old to have one.

And with that, I got back to mapping out my six-week luxury tour across Peru. Did you know it’s the new culinary capital of South America and that they have a lovely vintage Pullman train where the elegant bar car serves Pisco Sours all the way to Machu Picchu?

Can’t do that with a kid. As the famed wit Robert Benchley once observed: “There are two classes of travel. First class and with children.” I booked the first ticket.