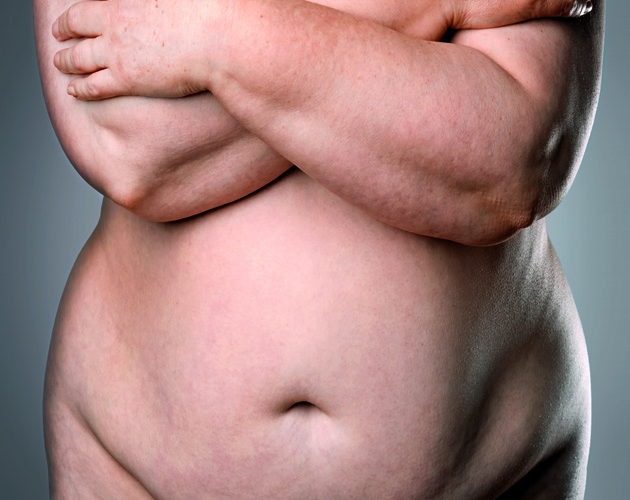 In an effort to overcome her modesty, Rebecca Field Jager* strikes a pose And if getting naked helps with older body “hang ups,” well, it’s a good thing.

Like many people growing up in a small town in the ’60s and ’70s, I come from a modest household. If, after showering, any member of my family had forgotten their robe, they could be glimpsed darting the short distance from bathroom to bedroom clutching for dear life to a towel.

At 53, I still dress and undress quickly in change rooms and wear a bathing suit in the women’s-only hot tub at the spa. I am at once embarrassed by and in awe of the locker-room ladies who lollygag about stark naked, comfortable doing everything from blow-drying their hair to selling me a chocolate bar in support of some youngster’s soccer team. Such women intimidate me, intrigue me and challenge my idea of who I am. I have a healthy body image, I think, and when it comes to sex, I’m happy to swing from a chandelier.

As long as I can wear a bra and panties.

So what’s up with my hang-up? Can it be overcome?

Rose MacDonald, the program co-ordinator at Danielle’s Place, a disordered eating support centre in Burlington, Ont., doubted I have a hang-up at all.

“If you are led to believe modesty is appropriate in childhood, it is normal for you to continue to believe that as an adult,” she said. “Additionally, we live in a society that, one, expects us to attain the unattainable—perfection—and, two, doesn’t exactly celebrate the aging body. It’s not surprising many boomers are uncomfortable being naked in front of others.”

*The images in this article are not of the author

Next: Getting past the hang-ups

Fair enough, but I still longed to get past my self-consciousness. Surely there was a way I could put myself in a situation that was safe but would force me to confront my fears. The idea to pose as a nude model came to me while I was chatting with my artist friend Denise who had just left a life-drawing class and was enthusing about the model who had posed nude.

“His name is Ben, and it’s so interesting the way he holds himself, the poses he strikes, the natural way he positions his limbs.”

“Uh, anything else?” I asked, cocking my head.

After a minute, she laughed. “It’s not like that. As an artist, you don’t see the person sexually. You just see shapes and forms broken down into parts. Besides, most of the best models are far from perfect. They’re rugged or wrinkled, saggy or oddly shaped.”

The Academy of Realistic Art, located in Toronto’s Junction district, is the playground and workshop of both professional artists as well as hobbyists. Its director and senior instructor, Fernando Freitas, assured me that, indeed, today’s artists are drawn to the so-called flaws of the human form.

“During the Renaissance, artists strived to capture perfection. Michelangelo’s David and Botticelli’s Venus are good examples. However, now we strive for something more representative of real life.”

Suddenly inspired by the notion of being a muse, I was happy when Freitas offered to let me be a model at one of his upcoming classes. He felt that a 20-minute session would be long enough to enable me to address my shyness issues and get a taste of what nude modelling is all about. The condition? I’d have to take an intensive lesson beforehand, so it wouldn’t be a waste of his students’ time.

Ben Huband—Denise’s favourite muse—agreed to be my mentor. At 44, he is among Toronto’s most prolific nude models, posing at colleges and universities, academies, private schools and community centres throughout the Greater Toronto Area. Legally blind, as a result of juvenile macular degeneration, Ben began modelling back in 2001.

“My job prospects were limited, but one day I was visiting my sister who was a student at OCAD, and they were looking for models, so I applied. The first time was the worst time, but after I dropped my towel, I relaxed. The horse was out of the barn.”

Next: Posing for the photo shoot

With both of us clad in black tight-fitting clothes, Ben taught me about the importance of stretching before a modelling session. Poses generally have to be maintained for three hours and, although they are broken down into 20-minute periods with five-minute breaks in between, the looser you are, the less likely you’ll suffer muscle cramps. He showed me how to create interesting positions with the swivel of a hip, say, or the creation of negative space (for example, the triangular “hole” created between your inner elbow and waist if you place your hand on your hip). To make his point about the necessity of strength and stamina, he assumed his Spiderman pose – a one-armed handstand with feet balancing against the wall.

We went over the mental challenges as well such as getting into the zone, that is, a state in which you have enough control to remain perfectly still and resist distraction, but you’re also able to lose yourself enough to pass the time. Ben believes that not being able to see his audience clearly probably makes this easier, but still he uses “head games” such as mentally listing the world’s most populated cities, say, or its tallest buildings to make the seconds tick by.

Jacqueline Tarnes, a Toronto woman in her 60s who nude models part-time takes a different approach. She focuses on the sounds in the room.

“I find myself listening to the intensity of the class itself, the concentration of the artists, the scraping of pencil over paper, the occasional pencil dropping, paper flipping or cough. The world recedes.”

The night before the big reveal, I found myself receding into a world of self-doubt. Had I groomed down below properly? What if my nose got itchy and I had to scratch? Why wasn’t my “go-to” sex position of lying on my back (boobs up, tummy flat) considered interesting?

Next: “You could have heard a pin drop…”

The next day I arrived at the Academy and quickly changed into the silky robe I’d brought from home.

Although I know I had a smile plastered to my face, I felt a bit zombie-esque when I walked into the classroom. There, a dozen or so strangers were taking their seats in a semi-circle around the “stage.” After Freitas introduced me, I stepped onto the platform, sat down, crossed my legs at the ankles as I’d planned, and awaited further instruction.

You could have heard a pin drop. So could have I, if it weren’t for the thudding of my heart.

I’d like to tell you that I let my robe slide to the ground femme-fatale style but frankly I barely remember taking it off. I’d like to say that I sat there as cool as a cucumber but, to be honest, for the entire time beads of sweat rolled down my body pooling unbecomingly in unbecoming places. I’d like to tell you that I got into the zone, but the truth is I remained painfully present, like a patient whose anesthetic wears off during surgery.

Still, it did the trick.

After the session, I was invited to check out the various sketches. Moving from easel to easel, I noticed that while all of the images were similar and bore my likeness, each was very different. It made me realize that whether it’s a lady in the locker room, a lover in my bed or a reflection of myself in the mirror, what is seen is not finite but instead an interpretation of a perfectly imperfect me. Why hide something already elusive?