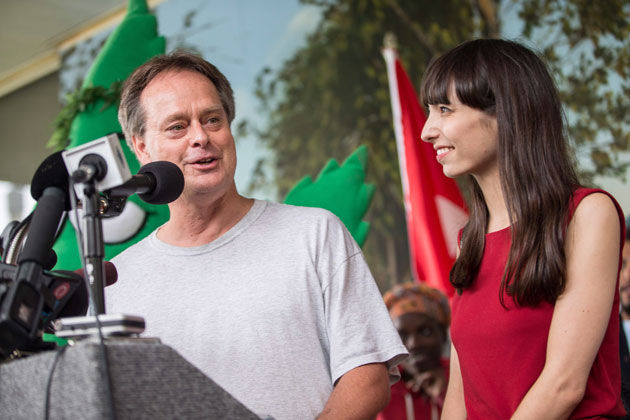 Marc Emery, and his wife, Jodie, were arrested at Pearson International Airport in Toronto Wednesday night on their way to a pot festival in Europe.

At least seven Cannabis Culture marijuana dispensaries owned by Canada’s self-proclaimed “Prince and Princess of Pot,” Marc and Jodie Emery, were raided by police across Ontario and Vancouver shortly after their appearance on VisionTV‘s current affairs show, theZoomer earlier this week.

The couple were arrested at Pearson Airport immediately following the taping of the episode “Legalizing Pot in Canada.” They, along with three other people, have been charged with trafficking cannabis. They are expected to appear in court Thursday, March 9.

Marc Emery, 59, has been arrested several times before, most notably in 2009 when he served a five-year sentence in a U.S. prison for selling mail-order cannabis seeds into the States. His 32-year-old wife, Jodie, has spoken out against her husband’s arrests.

The Emery’s are prominent pro-marijuana activists, well-known across Canada. In a statement from licensing head Tracey Cook: “The City of Toronto has consistently pursued enforcement actions against marijuana stores in the city. These operations are illegal under federal law and also operate in contravention of the City’s zoning by-laws.”

Meanwhile, the federal government continues to discuss possible changes to Canada’s marijuana laws. Health Minister Jane Philpott said the government plans to follow through on the promise to legalize and control the sale of marijuana.

“We made a commitment last April that we would introduce legislation in the spring of 2017,” she told CityNews. “I know spring is around the corner and spring runs until June 21st and we are firm in our commitment to having that legislation in place.”