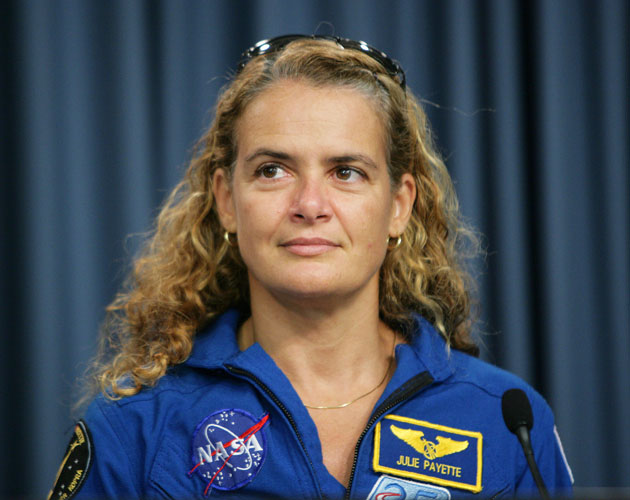 In a world littered by Trumps and terrorists, we now have Julie Payette! If everything else Justin Trudeau does as Prime Minister is as inspired as his pick for Governor General, Canada will have much to celebrate.

It was practically a given that he would appoint a woman to the vice-regal position.

Trudeau may be mocked on occasion for his feminine side and his aggressive advocacy of feminism and diversity but choosing a woman for a position historically held by titled white men was a wise and necessary move.

Julie Payette will be only the fourth woman to serve as the Queen’s representative in Canada.

It’s mostly an honorary role, defined by pomp and circumstance and doing the right and proper thing and setting a good example — just like the role of the Queen these days.

But in a world littered by Trumps and terrorists, giving prominence to someone who sets a good example, behaves in a regal manner and champions humanitarian causes and social justice is not just a worthwhile tradition, it’s a necessity.

It is a role that requires and promotes “grace and humility,” qualities that Trudeau noted about current Governor General David Johnston, who ably served for almost seven years — qualities sorely lacking in society right now.

It’s why we, as Canadians, continue the tradition of Governor-General.

She may be the fourth woman appointed, but she is the first astronaut, engineer and test pilot. She’s a woman who has defied not only gravity but the circumstances that made her childhood dream of going into space seem impossible — even ludicrous, she has said.

“When I grew up and I was nine-years-old in Montreal, I was a girl, they were men, I was Canadian, they were American.”

Undaunted, she became a pilot first and then one of only two women, including Roberta Bondar, in Canada’s astronaut program, eventually spending 25 days in space.

What’s exciting about her appointment as Governor-General is that unlike the three previous women appointed — Jeanne Sauve was a politician and Adrienne Clarkson and Michaelle Jean were broadcasters — she has excelled in the STEM areas historically inhospitable to women or avoided by them: science, technology, engineering, mathematics.

As Governor-General, she’ll be a high-profile role model encouraging young women (and men!) to not only work hard and persevere to make their career dreams come true, but to go where there are challenges and adventures.

But almost as important as the qualities and groundbreaking career of our new Governor General – which are exceptional – are the unexceptional aspects of her life.

She is a 53-year old, twice-divorced, single mother, who plays the piano and has unruly curly hair. Glamour is not her thing; despite living in outer space, she’s an earthy person. In spirit, accomplishment and appearance, she’s the anti-Melania.

She, and her appointment as Governor-General, make us proud to be Canadian.