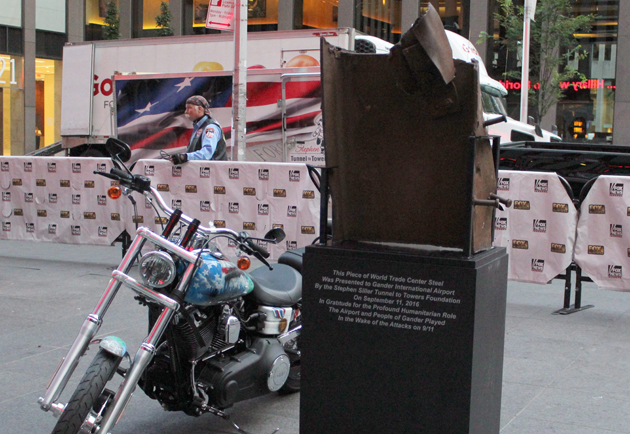 NYC has sent an engraved piece of steel beam from the south tower to the people of Gander as a thank-you for embracing its displaced citizens.

What’s the best thing about Canada? Just ask the more than 6,600 unexpected visitors who dropped in on September 11, 2001 after the deadly attacks south of the border. Here, we take a look at the qualities that made Gander meet history on that fateful day.

What’s the best thing about Canada? Your knee-jerk answer might be something about our free health care. Or, should you happen to be on a 16-month waiting list for a knee replacement, perhaps not.

You might want to crow about our sporting achievements. We did, after all, give the world both hockey and lacrosse. We also invented the game of basketball, five-pin bowling and ringette. Not to mention the baseball mitt (1883) and the goalie mask (1959).

Alas, Canada is also Junk Food Nation. The citizens of Winnipeg and Calgary chug down more Slurpees per capita than any other city. Proportionately, Canada boasts more doughnut shops than any other country. And we lead the world in macaroni-and-cheese consumption.

Crispy Crunch? Canadian. Coffee Crisp? Canadian. Nanaimo bars? Do you have to ask?

We have had our international triumphs. Canadians invented standard time, the electron microscope and the Wonderbra. Not to mention insulin, the Robertson screwdriver and the snowblower. But if somebody asked me to pick the best of Canada, I might just blurt “Gander.”

It’s a tiny, rugged town carved out of the boreal forest in Newfoundland. It doesn’t have the Rockies for a backdrop or the Great Lakes in its front yard or golden, winnowing wheat fields all around. It lacks the concrete canyons of Toronto, the glittering nightlife of Montreal and the touristic magnetism of Niagara Falls or Whistler. What Gander does have is people. Nine thousand, give or take. On Sept. 11, 2001 some unexpected visitors dropped in—more than 6,600 of them.

They came out of the sky in 39 huge wide-body jetliners. They were passengers on transatlantic flights bound for the U.S. But no airplanes were landing Stateside. New York had just suffered the deadliest terrorist attack in North American history. Authorities reeled in confusion and turmoil. Would there be more attacks? When? Where? Terrorists might even be aboard the more than 500 incoming overseas flights. So they shut the major airports down.

Small problem. Most U.S.-bound aircraft didn’t have enough fuel to make a U-turn back to Europe. Solution: land them at out-of-the-way airfields. Like Gander.

Now, 15 years after the terrorist attacks on the World Trade Center, New York City has sent a piece of steel beam from the south tower to the people of Gander as a thank-you for embracing its displaced citizens with open arms and hearts.

A plaque adorns the steel beam, which reads: “This piece of World Trade Center steel was presented to Gander International Airport by the Stephen Siller Tunnel to Towers Foundation on Sept. 11, 2016 in gratitude for the profound humanitarian role the airport and people of Gander played in the wake of the attacks on 9/11.”

Gander Mayor Claude Elliott said the steel relic will be cherished for “a long, long time.”

Back in 2001, all the incoming planes must have seemed like a Martian invasion. Impossibly huge monsters like gigantic birds of prey roaring in, settling one after the other along the taxi strips and parking aprons of a desperately overtaxed Gander airport. Hordes of frightened and panicky foreigners dumped in an unfamiliar town for who knows how long? Six thousand, six hundred? Gander didn’t even have 600 hotel rooms.

But when the passengers deplaned, they found citizens waiting with blankets, teetering stacks of sandwiches and steaming kettles of soup. Schools and churches were transformed into temporary hostels. Hundreds of Newfoundlanders offered spare rooms, soap, towels, use of their washing machines. Druggists filled prescriptions free of charge.

For most of a week, until the travel ban was lifted, the “plane people,” as Islanders called them, discovered Gander was their home away from home, and their money was no good while they were there.

Monica Burke of Seattle was one of the disoriented refugees standing on a strange tarmac in a strange town in a strange country. Seventy-year-old Beulah Cooper walked up, put her arms around her and said, “You come and stay with me.”

“I was tired, I was scared,” recalls Burke. “I broke down and cried. Beulah reminded me that kindness and humanity can light up even the coldest, darkest night.”

In the fall of 2011, David Jacobson, the then U.S. ambassador to Canada, made a special trip to Gander to say thank you to the hundreds of Newfoundlanders who had opened their homes and their hearts 10 years earlier.

In a voice that wobbled with emotion, he hailed the Islanders, saying, “You represent the best of us.”

Indeed. That’s Newfoundland. Smallish, as islands go, but with a heart as wide as the Prairies.

This article was originally published on September 11, 2015.