Chatting With the Unsinkable Jann Arden 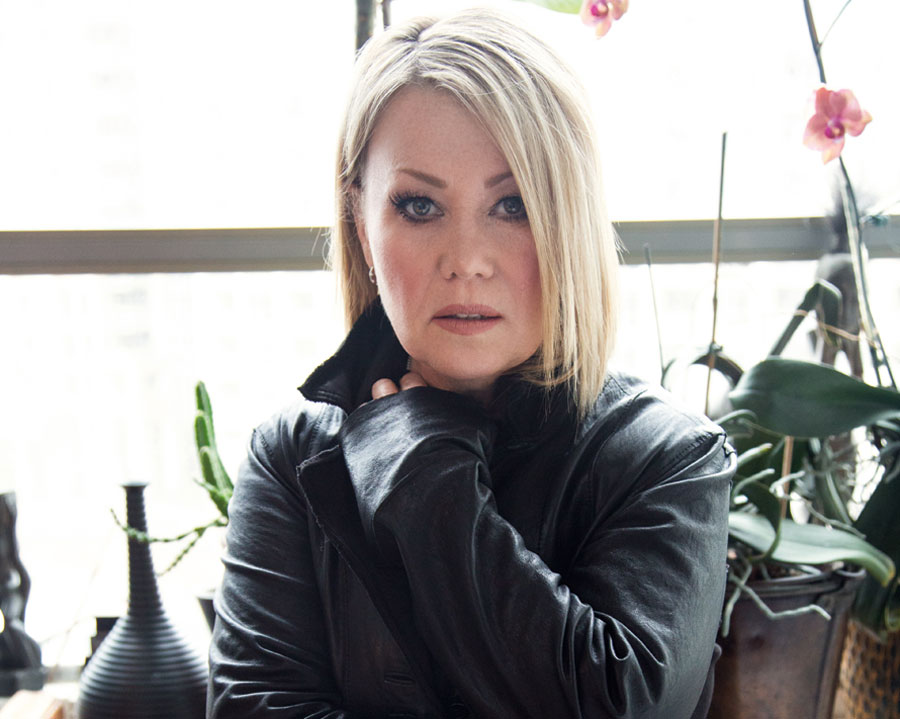 With her parents struck by dementia and Alzheimer’s, the Canadian songstress turns caregiver. She shares this journey in a moving new book on life, love and food.

I met Jann Arden at a downtown Toronto hotel on a recent overcast day, not in a cosy suite but, rather, a compact grey conference room with an obstructed window, tucked away beyond a labyrinth of halls and doors. The 55-year-old arrived and ran a hand through her windswept blond hair as she evaluated the space: “What is this place?” We shared a laugh, and she reached into her purse to retrieve a pack of fruit-flavoured candy and what looked like a granola bar. “Well,” she noted with a positive spin, “I’ve got these.”

Arden, of course, has a knack for navigating the unexpected, spending the last decade caring both for her late father, who suffered with dementia and died in 2015, and her mother, who continues to battle Alzheimer’s, while enduring the inevitable challenges and heartbreak that accompany it. She chronicles the journey in her latest book, Feeding My Mother – part memoir, part cookbook – and on a new tune, “A Long Goodbye,” ahead of an upcoming album due next spring.

As I discovered that afternoon, however, Arden refuses to allow even the storm of dementia and Alzheimer’s that has blown through her family to sink her famously raw honesty – or her wit.

MIKE CRISOLAGO: Feeding My Mother is a powerful, personal read. What made you want to write it?
JANN ARDEN: I think it started out as a plea for help and for feedback from people. I started writing journals on the internet – writing about my mom on Facebook. Sometimes over a million people would read it. And I think what I realized very early on [is] what a catastrophe memory-loss illnesses were. But I was blown away by the thousands and thousands and thousands of responses that I got from people that didn’t know what to do, didn’t know where to put their parents or their husbands or their wives or their grandparents … So I think that’s where it stemmed from – compiling five or six years of writing about the memory loss of my parents and what my experience was like.

MC: And the cooking element of the book?
JA: I’ve been cooking for my mom and dad for 10 years because they weren’t able to cook anymore, so I had to learn how to cook. Which is really sweet but I’m like, “Holy sh*t, this is not just me going to Subway anymore. I got to figure out what to feed these people.” And so I had put all these recipes together because I’m an avid foodie. I knew I always wanted to call it Feeding My Mother just because there was a psychological aspect to it … But just to sit down and eat is important, and I like what it says, too – when you feed someone spiritually, when you feed their souls and when you feed them emotional wellness.

MC: It’s a great avenue into the subject of Alzheimer’s, too, through food.
JA: My mom now is having trouble eating. If you put a sandwich in front of her, she’ll take it apart, and you have to say, “Mom, no, just pick it up with your hands.” And she doesn’t want to do that. Her brain is like, “No. What the f**k is this?” But she can still sit and peel carrots for me or peel a potato. She’ll peel a potato down to … little slivers, but it cooks fast. You can boil a slivered potato in, like, eight seconds.

MC: What early signs of dementia and/or Alzheimer’s did you notice in your parents?
JA: My dad had quite a bad stroke about 12 years ago, and he never really came back. He was a very clever man and, when the stroke happened, it was very much personality, and he couldn’t talk very well anymore. He just didn’t understand simple things. So his dementia started there. With my mom, it was repetitiveness. We all tell the same goddamn stories. I do it now at 55. “Did I tell you about when I got hit by that duck?” But most of us can hear a story 10 times and realize that there’s a problem. And just making up things like, “Oh your dad and I climbed up that mountain.” It was really random things, and then it was, “How do I use this can opener?” Reading time off a clock. It’s just stolen. She still knows names. They call it “presenting well.” You could sit and talk to my mom for a few minutes and you’d say, “She’s really awesome.” But she’d never find her way out of this building.

MC: And your mother was showing signs of Alzheimer’s long before your father died.
JA: Yeah, but he had skills that she didn’t have. When people have been married for almost 60 years, they cheat for each other. I’d say, “Have you guys eaten?” “Yes.” “What’d you eat?” “Well, ask your dad.” They worked in tandem. They started throwing out appliances because they couldn’t figure it out. My dad would unplug it and chuck it in the garbage can. I would go fish the thing out and plug it back in. You have to go along and have some compassion. I eventually had to put my dad in a nursing home because he couldn’t walk anymore. And then my mom really failed. So now I have full-time help for her, but I don’t know how people – and [many] have to do it because of finances – how they give up their jobs, move their parent(s) in and look after them because it’s expensive. So we have to figure it out.

MC: How did taking care of your parents affect how you took care of your own health?
JA: I had to change a lot of things. I was getting really unwell. I’ve lost a lot of weight and I just started eating better and I started feeding my parents. Obviously, I’m starting to cook food for myself all the time, but good food. Lots of vegetables and exercising. I was very depressed and I wasn’t sleeping well, and I thought, “I’ve got to make some changes.” I stopped drinking alcohol completely. When you say to yourself, “I’m just drinking too much,” you’ve prompted a dialogue that you have to respond to. So I’ve changed everything in the last two years but I feel much more capable and much more clear, way less anxiety. Reaching out for help. I didn’t want to burden my friends, now I hit my friends up. I talk about it. I think for three or four years I just couldn’t believe it was happening, and I was very scared because what does the future look like? The people that have looked after you your whole life suddenly disappear. And then when my dad died, you kind of feel orphaned. I’m like, “Holy sh*t, I’m actually a grown-up person. I’m on my own now.” I ended a 10-year relationship. When you have a partner who says, “It’s your parents or me,” okay, well, I guess it’s my parents. So it’s funny how everything happens at once.

MC: What’s it like, then, to be away from your mother to tour and record?
JA: It’s difficult. I phone every day. Usually the care worker is right there when I FaceTime, but Mom always has it pointing at the ceiling or she puts it by her ear. It’s hard to have a conversation. Her brain is getting less and less, so that’s kind of difficult. Really even after 40 or 50 seconds, it’s overwhelming. But I have cameras in her house, so I watch her like a hawk. You just have to check in, and life goes on. My mom would know that I would have to work. They knew that it was important to me, and that’s something I had to do.

MC: You have a new album coming out in the spring. Does writing and recording music help you to cope?
JA: Music is such a distraction, but I never know what I’m going to write about. I didn’t purposely start out to write about my mom or that experience. It’s just something that when you write it down, you’re like, “Oh, I think this is about my mom and about this experience.” I wrote the entire record with the exception of a couple of songs with [legendary Canadian producer] Bob Rock … I think it’s the best record I’ve done in 20 years. It’s very aggressive for me. There’s bluesy things on there [and] stuff that people are going to be very surprised that it is me.

MC: So at this point in your career and life, where do you find creative inspiration?
JA: Gosh, just life in general. I think the older you get, the more you realize it’s so great. It’s just having a purposeful life and finding things that you’re interested in … I just love music. It’s been encouraging to know that I still feel like writing songs. You wonder, “What’s going to be the last thing I write down?” But you look at people like [Leonard] Cohen and [Bob] Dylan and Neil Young who are still out there singing songs – Leonard right up until he died. I think he was working the week before. It’s just having a purposeful life, just doing stuff. This is what I do.

MC: There have also been rumblings that you’re writing a novel.
JA: I’ve been working on it for five years. Everyone laughs at me, but I have enjoyed the process so much. I think the story’s so great. It’s kind of a coming-of-age of this young girl on a farm, and her grandparents are raising her. It’s a long sordid story, but they’re horrible people, and her quest is to find her mom. And the cows talk. We have talking cows. So
it’s a little bit of a fantasy thing.

MC: At the end of the day, what do you hope people take away from Feeding My Mother?
JA: I hope that people realize that they are not alone with memory-loss issues. It is a catastrophic disease. There’s a million different kinds of dementia, and Alzheimer’s is in that family. So I hope people learn to ask for help and not feel so isolated with it. That’s what I hope.