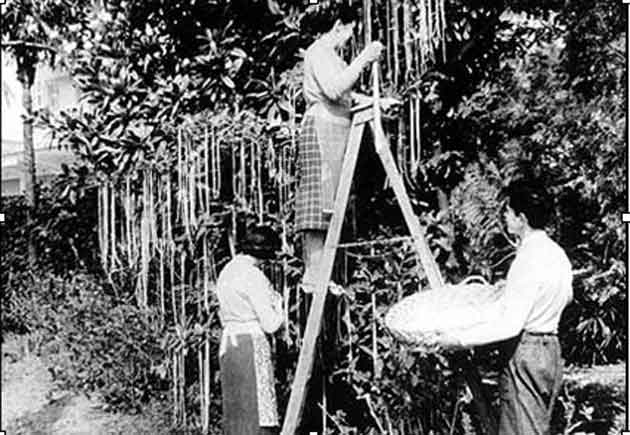 The recipe for a successful April Fool’s gag is simple: one part clever gag, one part duped audience. Luckily, each year great pranksters around the world rise to the challenge and exploit the naivety of their friends, neighbours and country people with classic ribs for our amusement. From an 18th-century hoax to an April Fool’s trick France played on Germany during the First World War (it’s true!), join us on our tour of global gullibility.

April Fool’s jokes never killed anyone – have they? Prank: If you think England’s tabloids publish unsubstantiated stories today, you wouldn’t believe what made headlines in the early 18th century. In late March, satirist and poet Jonathan Swift made the prediction, under the guise of a fictional astrologer named Isaac Bickerstaff, that a much more famous soothsayer named John Partridge would die. On April Fool’s Day, Bickerstaff celebrated the “realization” of his prediction, and Partridge was mourned publicly.

The only problem was Partridge wasn’t dead. Remarkably, he couldn’t convince others of that, even when he showed up in person. According to reports, the only true casualty in all of this was Partridge’s career. For all his notoriety as an astrologer, he never saw that one coming.

The ol’ spaghetti in a tree gag The prank: It seems the great-great-great-great grandchildren of those who fell for the Partridge gag weren’t any less gullible. In 1957, an unusually warm winter spelled the demise of Switzerland’s pesky spaghetti weevil. The story appeared on the BBC program Panorama, so it must have been true. Of course, without the spaghetti weevil greedily gobbling up all of their crops, the Swiss were shown harvesting spaghetti from the pasta-bearing spaghetti trees. Yes, actual strands of pasta dangled from tree branches.

Now, it’s one thing that some people believed this “news” report. But you had to be a special kind of naive to be counted among the crowd who actually planted bits of spaghetti in the hopes of emulating the success of the Swiss crops.

It’s still not as ridiculous as KFC’s “Double-Down” The prank: The next time you hold a hamburger, try switching it from hand to hand and see if you experience any difficulty. Evidently, enough Americans thought this to be an issue because they got pretty excited when an ad for Burger King’s new left-handed Whopper appeared in the April Fool’s Day edition of USA Today. What made it left-handed, you ask? All of the condiments inside were reportedly optimized for southpaw consumption.

You laugh, but Burger King had to actually deny its existence to stop people from flocking to their restaurants to try the new Whopper. It kind of makes you wonder – if Burger King had actually gone along with it, how long would it have taken for someone to return their right-handed burger because someone messed up their order and they’d actually paid for a left-handed one?

The prank: If you’re the only television station in the country, why not mess with your viewers? What are they going to do – change the channel?

In 1962, Sweden’s sole TV station also lacked colour. As a result, the broadcaster suggested viewers who longed for a more modern touch “colourize” the station by stretching nylon stockings across their screens. There’s no telling how many people fell for this dubious method of colourization, but if the Swedish people followed the example of others on this list, there were likely more than a few ladies pinning the waists of their over-stretched stockings to their dresses on April 2.

The prank: Just a few years after Sweden introduced a new “colourization method” for television, Britain’s BBC presented various aromatic foods on screen to announced they’d broken the fourth wall by inventing “smell-o-vision.” As ridiculous as this sounds, many viewers actually claimed they “smelled” the food at home. Remember though, that this occurred in 1965, less than a decade after some of these same viewers no doubt also tried to plant and grow their own spaghetti.

The prank: For all the laughs we’ve had at the expense of other countries, Canadians are certainly not immune to April Fool’s jokes. The only difference, it seems, is that we don’t get fooled – we get angry.

Enright: “I think the question on everyone’s mind is, how did a washed-up pig farmer from Hicksville such as yourself get involved in such a sophisticated bilateral trade argument?”

Carter: “Excuse me? A washed-up pig farmer? You’re one to talk, sir. Didn’t you used to be on the air five times a week?”

CBC fielded many furious phone calls that day but not because their host had blatantly insulted a former United States president on air. Rather, it was due to the fact that Enright admitted the call was staged and that Carter’s voice was impersonated. Listeners were not impressed.

Evidently, no one at the Globe and Mail listened long enough to hear the admission of the prank, as they ran a story on what they believed was a real verbal exchange in their paper the following day.

Victims: England, don’t you ever check the date before falling for this stuff?

The prank: According to the British newspaper  Daily Mail, a language barrier caused a Japanese participant in the London Marathon to misinterpret the run’s 26-mile length as 26 days. The paper reported that the participant, named Kimo Nakajimi, had just kept on running long after the race finished. It’s said that concerned citizens saw him running in the streets but failed in their efforts to stop him. Prankster: A French pilot willing to go to great lengths for a prank

The prank: Yes, even in the throes of war, some find the time to pull an April Fool’s hoax on others. You have to be really gutsy, however, to prank the enemy. That’s what one French pilot did during the First World War. This brave joker flew over a German camp and dropped a fake bomb directly into it, terrifying the enemy soldiers. The bogus bomb included an April Fool’s message. Three years later, the French helped present the German army with another document: the Armistice agreement. And that one was certainly no joke.

What are your favourite pranks? Let us know in the comments!