These Boomers Prove You’re Never Too Old for Tattoos 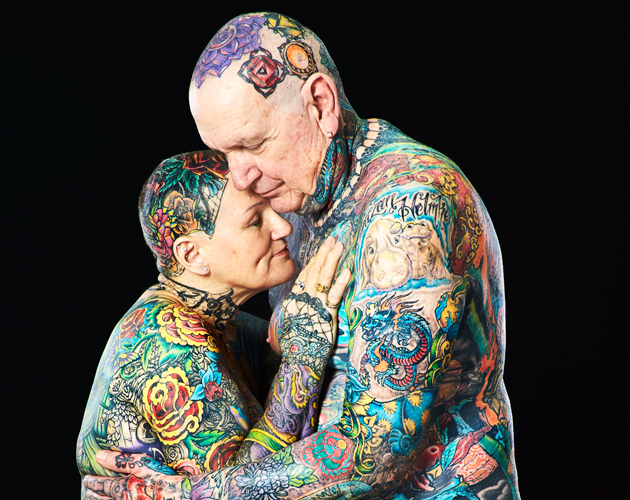 Although the taboos surrounding tattoos has dissipated over the years, age is often still a barrier for those looking to get inked. Meet the boomers who prove you’re never too old for tattoos.

Even today, with tattoos enjoying mainstream status, boomers who are drawn to this artistic form of expression remain reluctant to have their skin inked.

At the crux of their apprehension are doubts about the “fitness” of their older skin. Youthful skin seems to be the preferred canvas for tattoo artists and aligns with the generalization that tattoos are for the younger, more rebellious crowd.

Debunking that perception is a less-than-typical couple from Melbourne, Fla. – Charlotte Guttenberg, 67, and her partner, Charles Helmke, 75, each of whom holds the Guinness World Record for most tattooed senior citizens in their respective genders.

“That BS is just unbelievable,” Helmke says of being too old for a tattoo. “You can’t see the wrinkles with all the tattoos.”

The record-holding couple have each inked over 95 percent of their bodies and, while Helmke got his first tattoo as a young man in the army, it’s still a relatively new venture for Guttenberg.

She got her first tattoo – a small butterfly on her chest – while in her mid-50s, following the death of her husband who had always disapproved of tattoos on women.

Guttenberg, however, didn’t see a problem with it. “As far as I was concerned, it was no different than makeup,” she says.

The one difference of course, is the permanency, which is often what people find so disconcerting about tattoos in the first place.

Jennifer Dekant, a tattoo artist based in Sarnia, Ont., has noticed a marked difference in how her older clients settle on a tattoo.

“I find that they’re not as impulsive and [usually] have something in mind,” Dekant says. “You don’t find a lot of older generations just getting a little tattoo that they’re going to want to cover up later.”

In the end, Guttenberg’s first tattoo, that tiny little butterfly, left much to be desired and proved the importance in researching tattoo studios in advance. The butterfly design had been handled by an inexperienced tattoo artist. “I don’t recommend being tattooed by amateurs,” she says. “It usually ends in heartache.”

So Guttenberg sought out someone with a little more experience to fix her tattoo. She found one: a longtime artist who also had a background in graphic design.

During the consultation process, a painting of a tattoo bodysuit caught Guttenberg’s eye. When asked what she wanted on her body, she pointed to the artwork on the wall. “That!” she said drawing laughter from the artist.

Even in those early days of tattooing, the idea of covering the majority of her body wasn’t all that far-fetched: the retired author no longer had to worry about tattoos potentially affecting her career. “I decided I was beyond that, so I might as well just do what I please.”

After the consultation, the tattoo artist transformed her mediocre one-dimensional butterfly into a vibrant swallowtail. Soon after, the tattoo evolved into yet another when she decided her swallowtail butterfly needed something to rest on. “I had a little peony added to the piece of artwork,” Guttenberg says. “I decided that it looked a little odd just sitting there [alone] on the top of my breast.”

From there, one tattoo led to another and another, until  – save for her face – they consumed Guttenberg’s entire body. But out of the hundreds of pieces of art that make up her mural-like bodysuit, there’s one that carries particular significance – a rose garter on her thigh that she had inked in 2006.

In the midst of having the garter done, she met the recently widowed Helmke, who happened to stop by the studio to visit a friend. He was asked to distract Guttenberg while the particularly painful piece was completed.

“I sat there and I held her hands and I just babbled,” he says. “I couldn’t tell you what I talked about, [but] it took her mind off it. Later, we were walking out the door, and she informed me that she was in a relationship, and I said, ‘Well, I wasn’t looking for one.’ As it turned out, that was a lie.”

Once they started dating, “We were taking turns getting tattooed, and pretty soon we [each] had a bodysuit,” Helmke says, insisting that there is a lot of planning involved.

Tattoo artist Dekant, who discourages walk-ins, says that the consultation process is key not only for designing your tattoo in advance but also to ensure that you have the right artist for your needs.

For older clients, the artist requires a lighter touch as older skin is more susceptible to “blowouts,” which occurs when the ink is pushed into the deeper layers of the skin, causing a smudged look.

“You can’t have a heavy-handed artist tattoo older skin,” Dekant says. “You have to treat them like they have paper-thin skin, ease up on the needle and you can’t go too deep.”

It’s important to note that those who are diabetic or on blood thinners tend to bleed more and should talk to their doctor before they go under the needle.

To avoid “tattooer’s regret,” make a commitment to the subject matter and design of your tattoo. Helmke, who had his late wife’s ashes embedded within a commemorative tattoo, says, “You need to have some attachment to the art in order to persevere long enough to be able to complete it.”

Of course, tattoos can be painful, particularly when they’re done in places where there’s little separation of skin and bone.

For 60-year-old Michèle Swiderski of Peterborough, Ont., persevering through the pain of her first (and only) tattoo was well worth it.

She had it done at age 59 and on her last day of work, but the tattoo marked much more than her transition into retirement. The simplicity of the word “Joy” alongside a semicolon on the back of her wrist represented her successful recovery from several bouts of depression.

“The next part of my life was starting, and I meant for it to be all about joy,” Swiderski says, “which, because of my background [battling depression], was a significant statement.”

Among depression survivors, the semicolon represents their continuing battle with mental illness. “The semi-colon says ‘I’m not done with that thought’ – [that] there’s more to come. So it’s a symbol for a life,” she explains. “I’ve decided to stay in this life and keep trying, keep going.”

The significance of her tattoo is evident from its design right down to its placement. Rather than have an artist design something elaborate, Swiderski went for a more personal touch, sketching the tattoo herself. She says the colourful lettering represents the importance of creativity in her recovery.

Her placement of the tattoo, on the back of her wrist, serves as an important reminder:

“I wanted it to be a visual reminder every single day, every minute of the day, that joy is mine to have.”

Guttenberg maintains that her tattoos are primarily for her as well, likening them to the artwork you might hang on your wall.

“[It’s] a perfect analogy because this is our artwork, and we choose to wear it,” Guttenberg says. “I have this artwork because I enjoy it.”

They say that public reaction is mostly positive. Younger people who are curious about their art often strike up a conversation with them while fellow seniors tend to inquire more directly.

“You’ll feel somebody petting your arm, and you turn around and it’s a little old lady,” Helmke laughs.

Whatever the reaction they receive, Guttenberg and Helmke are happy to have a conversation with anyone who has questions.

“We understand that we are oddities, and [people] need to see beneath the colour. We want them to see that we’re actually fairly intelligent human beings,” Helmke explains. “It’s only a physical transformation.”

When asked why they do what they do, they respond in unison, “Why not?”

[It’s] a personal decision somebody makes,” Helmke says. “You may not have any tattoos. Well, that’s okay, too.”

When it comes to changing the perceptions of the gawking strangers and internet trolls that disapprove, the world record holders have little interest. “I really am of the opinion that it’s none of my business what other people think, and it is not my responsibility to change your way of thinking,” Guttenberg says.

It’s a self-assurance that comes with age. And while Swiderski’s modest three-letter reminder on the back of her wrist doesn’t draw the same attention as a bodysuit does, she says that her age made the decision to get inked much easier.

“The older I get the more freedom I feel,” she explains. “It’s a little bit like a licence to do your own thing.”