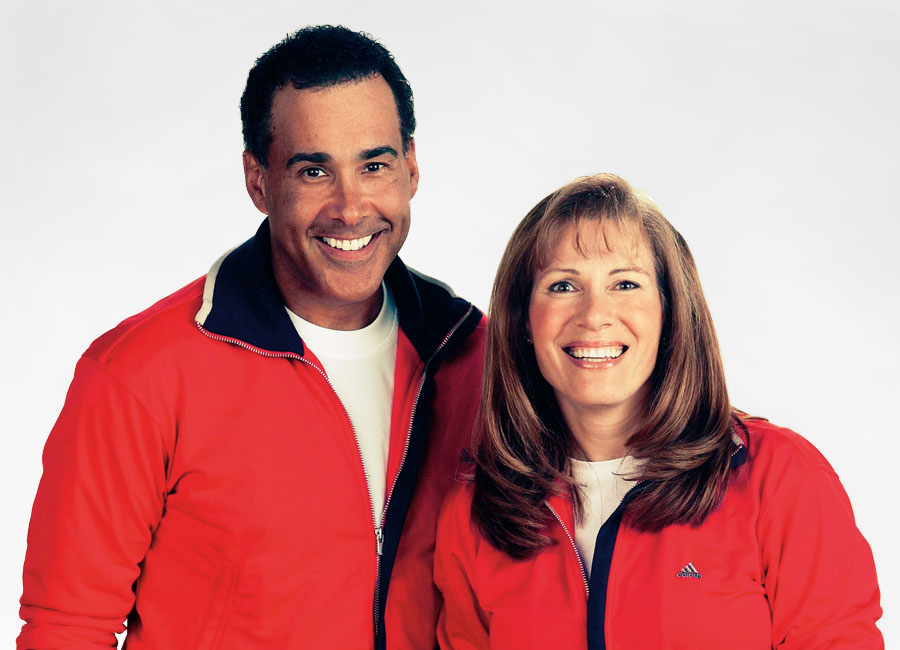 She’s training for an Ironman. He plays hockey three nights a week and 100 or so rounds of golf a year. Thirty years after starting Body Break, fitness duo (and yes, they’re married) Hal Johnson, 62, and Joanne McLeod, 60, seem just as fit – and appear to be having just as much fun.

“I look at life and think, ‘What am I going to play?’ I’m just going to play stuff,” Johnson says. As for McLeod, her motivation is a little more pragmatic. “My biggest fear is not being able to do things. I don’t want anything to do with a hospital or people taking care of me … that fire keeps me going!”

We caught up with the pair at the Toronto Central YMCA where they presented their latest initiative, WellnessQ. Rather than IQ, they’ve got tips to improve your wellness quotient.

“I just get up every day and think, ‘I’m going to be healthier than I was yesterday.’ And when I have a birthday, it’s ‘Okay, by my next birthday, I’m going to be healthier,’” Johnson proclaims. If you can’t muster quite that much optimism, simply focus on “I can” rather than “I can’t,” says McLeod. “Yes, you may not be able to do whatever you like the same as you did when you were younger but you just do it in another way.” With rheumatoid arthritis in her hands, McLeod’s solution was to supplement her daily routine to remain as active. “With a tennis ball or a smaller ball, you just squeeze to exercise the muscles. If your hands are muscularly strong, it will allow you to keep doing things.”

What gets measured gets done. Both McLeod and Johnson use MyFitnessPal, an app by which users can log and monitor both what they eat and how much they exercise. “Technology can help you to stay motivated, it can make you accountable and it can challenge you,” McLeod says of apps and activity trackers. Even a simple pedometer can be the wagging finger you need to get up and get in those 10,000 steps each day.

3. Seek out the “right” triggers and motivators

Find a fitness buddy to whom you’re accountable. Johnson’s happen to be four-legged. “They don’t say, ‘Oh, well, we can go for a walk later.’ They’re, ‘Get up! Let’s go!’ ” he says of the couple’s three dogs. “They get me out – even if I don’t feel like it.” And curate the company you keep. “So you’ve got certain friends that are speed walkers at the mall. The other friends like to go to the bar. Which ones are going to have a positive impact on your lifestyle?”

4. Read the label, cut the sugar

Every day the average Canadian consumes 110 grams, or 26 teaspoons, of sugar. For those who are counting, that’s 426 calories. And it’s added to things you may not suspect, says Johnson. “Whether it be soup or ketchup or salad dressing, those are the little things that add up.” He also warns against “health halo” products. “There’s very little, if any, benefit of having Nutella over icing. You’re better off to have the icing because at least you know you’re eating something unhealthy.”

5. Keep your brain fit, too

Scrabble, Sudoku and even screen time can help. McLeod says she got a ribbing from Johnson and their daughter back when she started loading games onto her iPhone. “But I realized I was doing it not just as a way to exercise my brain but also as a way to control stress. Just five or 10 minutes a day can lower your blood pressure, and you’re having fun while you’re doing it.”

In addition to a healthy lifestyle and regular checkups, the pair also promotes adult immunization. For WellnessQ, they partnered with GlaxoSmithKline, maker of vaccines such as those for flu, hepatitis and shingles. “As we age, no matter how much we eat right and exercise, our immune system is more susceptible,” Johnson points out. “So it’s really about that ounce of prevention being worth a pound of cure.”