World Heart Day: I Was 42 When I Suffered a Heart Attack 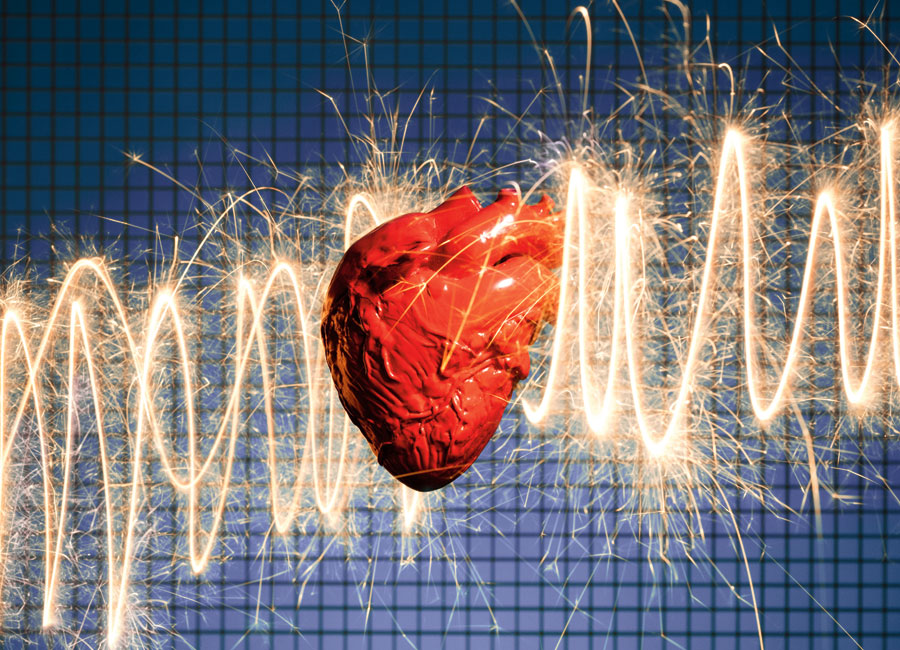 September 29 is World Heart Day. Here, Jim Slotek tells us how he survived a heart attack at age 42.

It obviously shocked his fans when 47-year-old film director Kevin Smith was stricken by a major heart attack in February while performing onstage for a comedy special.

And Canadians were similarly shocked to hear of the death of 57-year-old Conservative MP Gordon Brown, who had a heart attack in May in his Parliamentary office after playing an early morning hockey game.

But it shook other people more. It shook people who know what it’s like to have a coronary episode in their 40s, or people who’ve had one after engaging in what we think of as healthy exercise. People like me.

(For one thing, I can pretty much guarantee Smith’s friends are asking him questions like, “Were there any symptoms beforehand, and were they at all like the ones I’ve been having?”)

I was 42 when I had mine on Nov. 25, 2000. I was playing squash. And I vividly remember I was winning. But a pain that began in my arm had spread (textbook) to my chest. I called the game, showered and started walking, as I’d planned, toward the office.

Things got worse, and the pain verged toward excruciating. I cancelled the office plan and decided to go home, driving while having a heart attack. Once there, I figured I would get my wife to drive me to the hospital. She wasn’t there.

I called 911, then noticed I’d parked the car partway up the curb. So, in a daze as I waited, I went out to straighten it. The paramedics arrived as I was getting out of the car, hollered at me and fairly threw me into the ambulance. I remember one of them on the radio saying, “Direct to needle!”

I didn’t know it at the time, but I’d suffered what had euphemistically come to be known as a Hockey Heart Attack – wherein people in their 40s and 50s, with no regular exercise routine, go all out once a week (with, maybe, chicken wings and beer after). At Toronto Rehab’s storied Rumsey Centre (more on that in a bit), I met two guys my age who’d both had their myocardial infarctions as they skated, ashen, to the bench.

Coincidentally, a few months later, the actress Sharon Stone, who is four months older than me, would suffer a stroke while training for a 5K race.
My angiogram did not show excessive blockage – 30 per cent in one artery, 40 per cent in another – “about average for a 40-something North American male,” a cardiologist told me. This sounds like a lot, but Kevin Smith had a 100 per cent blockage of his LAD artery. Typically, when you hear about blockages and heart attacks, they’re above 90 per cent. Doctors became aware of the progression in the general public during the Vietnam War when, tragically, they had an unusual surfeit of young adult cadavers on which to perform autopsies. They discovered evidence of atherosclerosis already in young adult males barely out of their teens. Plaque may not be natural, but we all have it, in North America at least (and in places with a North American diet) and in children as young as three. In my case, the likeliest scenario was that a piece of plaque had broken off, clogged an artery, but was subsequently dissolved by the clot-busters I received immediately upon admittance.

“Of course exercise isn’t a bad thing,” says Dr. Paul Oh, director of the Rumsey Centre. “But people can develop vulnerable plaque spots in their arteries, and then some kind of stress can tip it over. Fatty streaks grow up over time, and stress can make that plaque rupture.

“It’s kind of like a volcano that erupts. It’s quiet, and everything looks okay until a point where something happens. In geology, it’s when that tectonic plate shifts. For humans, it could be an acute stressor, like that shift in a hockey game, that squash game. It might be shovelling snow. It might be smoking a cigarette or it might be mental stress.

“If you’ve increased your lung capacity, say, improved your fitness and lowered your blood pressure and heart rate, the plaque can be more stable, even if it’s the same size.”

Oh works at the place that saved my life, the Rumsey Centre, a revolutionary facility in Toronto’s Leaside neighbourhood that shocked the medical world when it began in 1968, by getting heart patients walking and then running. After completing its program, I would end up jogging 10,000 miles over the next 10 years, with a lower body mass index and nearly a litre more lung capacity.

But it started at that 50-year-old centre that is so unchanged my revisit felt like I was having a flashback. On the indoor track, about a dozen people were walking purposefully, some wearing chest monitors, while staff watched from the sidelines. Same as it ever was.

For decades from 1973 onward, the founder Dr. Terry Kavanagh, a runner himself, took teams of patients to marathons – a venture that reached its apex in 1985, when he put a heart transplant patient in the Boston Marathon. Brian Price was 44 when he received his transplant and ran the marathon 15 months later. Price died in his native Wales this year on Jan. 14 at age 77, two weeks short of the 34th anniversary of his heart transplant.

The Rumsey Centre was like heart school. And the most important thing I learned was that everything we used to know was wrong. I also learned that, in cardiac treatment, there is no such thing as the good old days. The “needle” that awaited me at the end of the ambulance ride was a dose of clot-busters – thrombolytic therapy – that serves to dissolve blockage (a treatment so effective, they didn’t let me shave for a few days, lest I bleed out).

Widely introduced in the late ’80s, it raised the survival rate from 50 per cent to more than 90 per cent almost overnight. “Basically, in the old days,” one doctor told me by way of praising thrombolytics, “the way we treated a heart attack was to give you morphine and wait for you to finish having a heart attack.”

In the 17-plus years since my experience, there’ve been other refinements. “In the past 15 years, it’s become common to go right to the angioplasty room and open the artery up right away with a stent, which was very revolutionary,” Oh says.

But it was the “lie-in-bed-recovering” mindset that really had to be overturned. “What Dr. Kavanagh did was quite provocative,” Oh says. “There’s this article I quote from 1965, a journal called Circulation, one of the preeminent cardiac journals. It’s about the management of the dilated heart – and in it, it says, ‘You should rest in bed for several months.’ That’s the quote.”

God knows how many people were killed by that well-intentioned advice to stay in bed. But the reverse prescription clearly saved many. The Cardiac Health Foundation of Canada, the charity that originally funded the Rumsey Centre, works with 30 other cardiac programs in Kavanagh’s model to sponsor Walk of Life fundraisers across Canada.

It’s simple and relatively cheap, which doesn’t save it from health-system cutbacks. John Sawdon, public education director of the Cardiac Health Foundation, tells us that similar cardiac rehab programs have closed recently – including those at North York General Hospital’s Branson Hospital and at the London Health Sciences Centre.

Hey, people can exercise at home, right? Why waste taxpayers’ money on life-saving advice and supervision?

For Oh, a youthful-looking 53 and a middle-distance runner himself, the program has been something of a spiritual uplift.

“It’s been very rewarding working with the teams and patients here. I spent the first 12 years of my life in internal medicine at an acute care hospital, helping people with really acute medical events like heart attack, stroke, infection, kind of just patching people up.

“Here, I found myself working with people over the course of months or years, working on lifestyle things, seeing people regain their health. That’s very exciting.”

Irrespective of exercise, the activity activists have a new target – sedentary workplaces. As you’re probably aware, sitting is the new smoking. And it’s only taken 65 years for that message to spread.

In 1953, a study was published in the medical journal The Lancet of British double-decker bus drivers and conductors. The conductors spent all day on their feet, taking tickets up and down the bus. The drivers sat and drove. They had three times the rate of heart attacks. “It was a very nicely controlled experiment,” Oh says, “because they were guys from the same neighbourhood and jobs, you can assume they all had the same lifestyle, ate the same things, drank in pubs, smoked. The main difference affecting health was the non-sedentary behaviour.”

As for me, my worldwide run (I’d found running trails all over the U.S., in London, Paris, Thailand and Turkey) ended after three knee surgeries, to be replaced by a home elliptical machine. I’m no angel, diet-wise, my blood pressure and cholesterol need monitoring, but I have kept off the weight. (Granted, the once obese Smith had dropped 65 pounds. Apparently, you can be overweight or underweight and still be at risk).

And as a freelancer these days, I’m no longer tied to a desk, which means I can break up my work by getting up and walking the dog or doing a bit of laundry. (For those still going to the office, I have one friend who just had his first day at a “standing desk.” Apparently, it will take some getting used to.)

“I guess I’m in the Zoomer vintage,” Oh says. “And I’ve taken up the healthy living challenge. There’s a cardiologist, Dr. Lloyd Jones, who talks about what happens to you after age 50. At that age, your risk of a heart attack or stroke could be as high as 50 or 60 per cent – or as low as five per cent – depending on what you choose to do in terms of your health behaviours. Eat well, don’t smoke, be active, moderate your alcohol intake. “My message is you can choose your destiny.”

And mine is: keep moving.