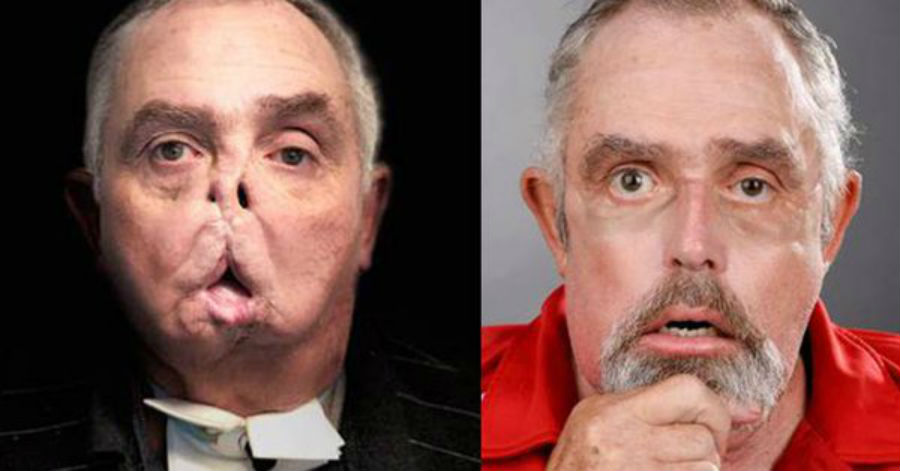 Maurice Desjardins, 65, is the first person in Canada to receive a face transplant and the oldest to undergo the procedure since it was pioneered in France in 2005.

Seven years prior to the transplant, Desjardins lost his nose, lips, teeth and upper and lower jaws when he was accidentally shot with a hunting rifle.

However, an earlier attempt to reconstruct his face using bone from his fibula hadn’t improved his quality of life. Leading up to the transplant he was still experiencing pain from the nerve damage and was breathing through a tracheostomy — a tube inserted into a hole in his windpipe. He also couldn’t close his mouth or eat.

So when Montreal plastic surgeon Dr. Daniel Borsuk — also known as un magicien du visage or “magician of the face” — told Desjardins he was a candidate for a face transplant, he jumped at the opportunity with little concern for the risks, which include the body’s rejection of the new face or even death.

“I am always being judged by others. I’d rather die than keep living like this,” Desjardins told the CBC ahead of the surgery. “I don’t care what face I’m going to get, as long as I look like everybody else.”

Dr. Borsuk, says Desjardins health both physically and mentally was more of a factor than his age.

“We look for someone who has mental fortitude, has resilience and [can] get through challenging rehab,” Borsuk told The Washington Post. “And someone who understands risks and benefits.”

Assuring Desjardins was emotionally as well as physically ready to receive a new face involved regular evaluations from psychiatrists for over two years.

The Montreal surgeon scrubbed in on a face transplant surgery for the first time in 2012, when he was a fellow at the University of Maryland. Joining a team of surgeons, he helped prepare the face of a 21-year-old brain dead organ donor for a gunshot victim.

In the years since, he’s never lost sight of the sacrifice required for each donation.

“Can you imagine on the worst day of your life when you lose a loved one and you’re approached for organ donation and this family gives all the organs of his loved one — including the face?” Borsuk told CTV. “It’s the most harrowing day of their life and they’re going ahead and probably giving the most generous gift you can give to another person. It’s unbelievable. They’re the true heroes.”