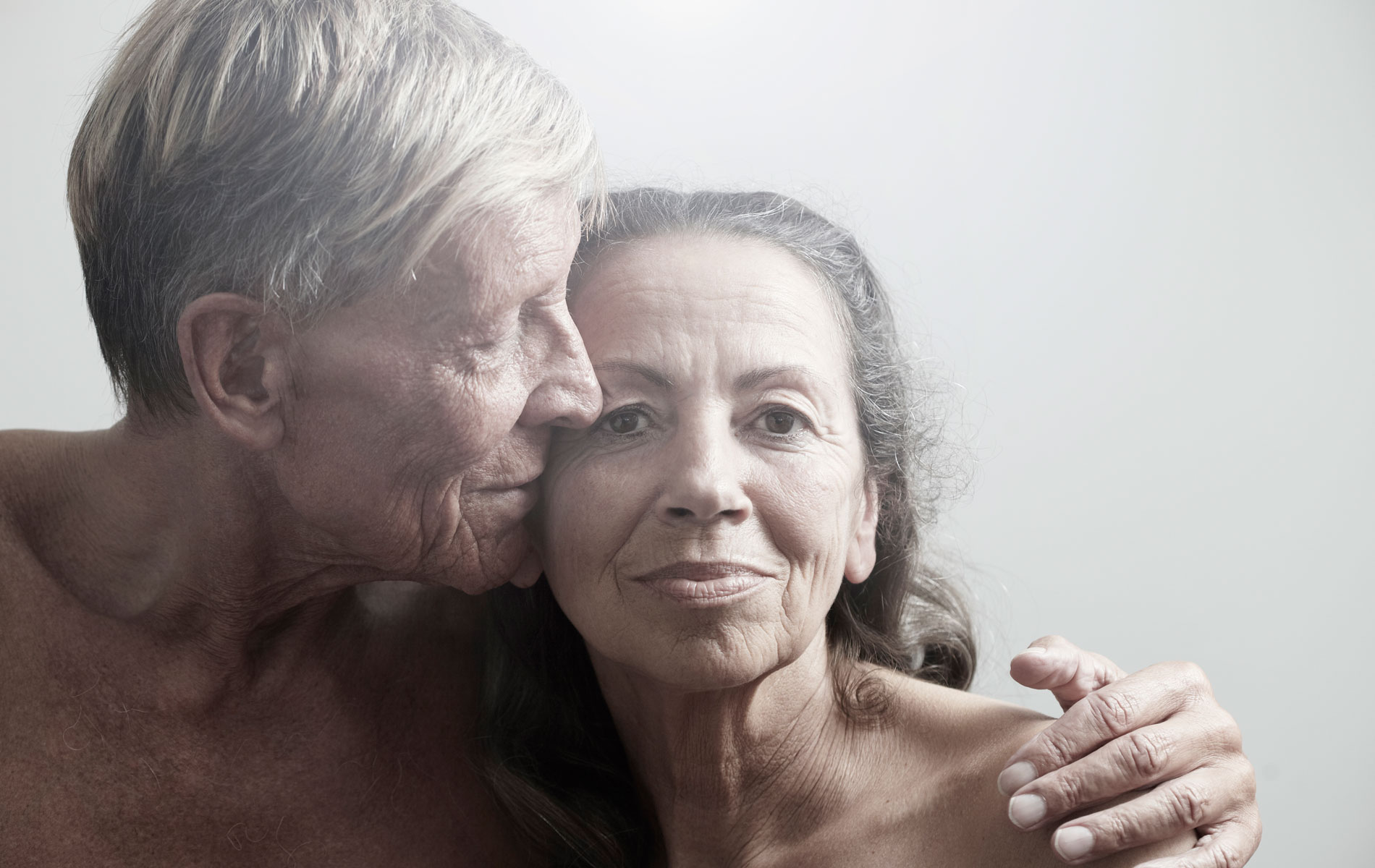 From our changing bodies to adjusted attitudes, understanding intimacy as we age.

Anyone who has a few wrinkles or grey hairs can attest to it: body parts change as we age. All body parts. But while sexual function in your 60s may not look the same as it did in your 30s, it doesn’t mean the cobwebs are closing in. Numerous studies prove that interest in sex often continues into a ripe old age. So does activity.

An American study in the New England Journal of Medicine found that a majority of seniors age 65 to 74 are sexually active. In the U.K., the English Longitudinal Study of Ageing (ELSA) reports that of non-single women in their 80s, 41 per cent enjoyed a roll in the hay within the past year. We don’t have similar research on Canadians at this age, but a Trojan survey of 2,400 mid-life Canadians found that the oldest group (55-59) got the same amount of pleasure from sex as the youngest (40-44). Advancing age is not holding anyone back.

But the older body is different. And in order to stay sexually active later in life, adaptations might need to be made or treatments sought – or minds opened.

“Making love is expressing your feelings for your partner in a physical way. It could include intercourse but it could include other activities,” says Dr. E. Sandra Byers, professor and chair of the department of psychology at the University of New Brunswick, who has researched sexuality and aging.  “You just need to find ways to pleasure each other and feel good about it.”

Desire can also go down if the relationship is strained—something that’s often missed, says Byers. “I see people who are looking for some kind of medical explanation for a sexual problem, but they’re fighting all the time. Who’s going to feel desire for someone you’re not getting along with?”

Adds Byers: “People need to create new sexual scripts, new ways of making love that are mutually pleasurable, that work for both partners.” Here’s what might lie ahead—and what you can do to make sure your sex life continues to thrive as you age.

His Symptoms The ability to concentrate and plan is altered by dropping testosterone levels, says Dr. Jack Barkin, a Toronto urologist, and visual stimuli may be less effective: “Looking at a sexy picture may not stimulate a sex response anymore.” Sexual function is also more strongly affected now by psychological stress. And because after age 50 testosterone levels decline by one per cent a year, this also causes decreased desire, a reduction in muscle mass and an increase in body fat. Erections take longer and are less rigid. (Ejaculation may take longer, too, which can be fun.) Erections may come and go several times during sexual activity.

The Solution Play along. “Penis-in-vagina intercourse doesn’t have to be the be-all and end-all,” Paulsen says. “Sex can mean whatever the couple wants it to mean, as long as they’re both comfortable and willing.” For men who are having trouble getting erections, possible therapies include PDE5 inhibitors (Viagra and friends), injections or vacuum devices. Try talking to your family doctor or urologist. “Men still don’t want to talk about their problems, even though we [doctors] can help them and they want help,” says Barkin. “We can’t reverse the aging process but we can definitely provide options, whether they be medical, physical or emotional, to help them have a satisfying sexual activity.”

Her Symptoms Estrogen production drops off at menopause. Vaginal tissues become thinner and more easily irritated and produce less lubrication. The vagina becomes less expandable. Although sexual desire is influenced by multiple factors, there’s also a natural decline from aging and menopause, says Dr. Wendy Wolfman, director of the Menopause Clinic at Mount Sinai Hospital in Toronto. (Drugs to address this are currently in trials.)

The Solution Make up the estrogen you’ve lost. “It can restore some of the moisture and elasticity,” says Wolfman. “Since the vagina is exquisitely sensitive to estrogen, it will respond to safe, local low-dose estrogen therapy via a low-dose tablet, cream or ring—or when systemic estrogens via pills, gels or patches are used.” Help your skin by wearing breathable cotton underwear (go commando at night) and wash both your undies and your lady parts with mild, fragrance-free soap. Vaginal gels containing hyaluronic acid can help with dryness. Some women use coconut oil or even Crisco shortening. For sex, learn to love lube. (Lubricant will also protect your condom from breaking—you are using condoms to prevent STIs, right?)

His Symptoms The prostate enlarges with age, obstructing urine flow in 65 per cent of men over 50. Symptoms like frequency, urgency, incontinence and infections can interfere with sex and self-confidence. Prostate enlargement and erectile dysfunction also appear to be interlinked, so if ED becomes an issue have it checked ASAP.

The Solution Treat the prostate symptoms. “Often, if we can improve the voiding function with medication, we can also improve the erections.” says Barkin.

Her Symptoms Women, too, may have some urinary incontinence as they age, often related to weakened bladder or pelvic floor muscles, sometimes caused by pregnancy, childbirth and menopause—and for both men and women, a lack of physical activity, obesity or, well, just plain aging can be the culprit. Like men, women may worry about leakage at the wrong time or that the skin carries an odour. “It can affect your desire,” notes Wolfman. Plus your skin can get sore if you’re washing too frequently or wearing absorbent pads all day long.

The Solution There are also products you can insert vaginally, like Uresta and Poise Impressa, that block urine leakage, but may deflate spontaneity. Both must be removed before intercourse. Depending on the cause, physiotherapy to strengthen your pelvic floor might help, but it’s important to pinpoint with your health-care pro what’s causing it before treatment. Diabetes, obesity, high cholesterol and cardiovascular disease all become more common in older men and women. And all can impede blood flow, affecting your sexual response. “Diabetes has two dramatic impacts with sexual activity because it affects both the nerves and the blood vessels,” says Barkin. If you’re obese, “Physically, the act of sex can be more difficult because you just can’t get close enough to your partner.”

Naturally, we’ re going to suggest weight loss, better diet and exercise. “More aerobic activity will increase blood flow and oxygenation,” says Barkin. Cut back on alcohol, which makes you less alert and slows your response time. Paulsen suggests: “Get a physical. See if there are things that you can be doing to feel healthier.”

Under the knife for your sex life?
For people who yearn to trade in their private parts for newer models, is surgery an option? When it comes to surgically treating age-related changes in a bid to improve your sex life, perhaps not. Some cosmetic surgeons offer vaginoplasties, also known as “vagina tightening” for women who feel their slackened vaginas are interfering with their sexual function. That said, medical societies are cautious and concerned and cite a lack of long-term research on safety and efficacy. Like all surgeries, there can be serious risks to these surgeries and, without clear evidence of benefits, the medical experts don’t recommend them. In fact, the Society of Obstetricians and Gynaecologists of Canada cautions that there’s little evidence to show that having an operation on your vagina will actually enhance your pleasure—or your self-esteem.

Similarly, older men who notice a bit of shrinkage because of increased abdominal fat or lack of blood flow should steer clear of so-called enhancement procedures. These surgeries very often do more harm than good, says urologist Jack Barkin, and the Sexual Medicine Society of North America considers them “experimental.” Some Canadian clinics even offer fat injections to increase size, but this carries serious risks as well, including infection and scarring. “There is no way to make a penis longer than what it is,” Barkin adds. In other words, gents, it’s not the size—it’s how you use it that counts.

A version of this article appeared in the September 2017 issue with the headline, “Sexual Healing,” p. 78-80.