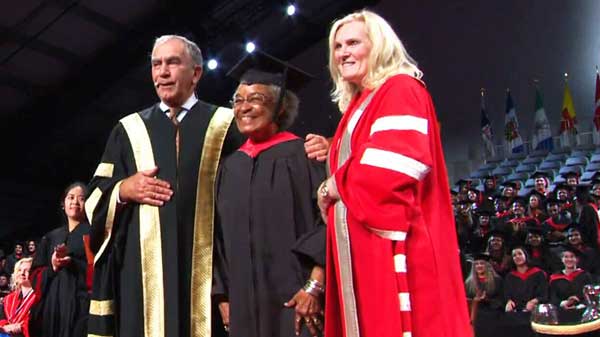 For university students, the completion of a degree is usually tied to gaining necessary skills for the work place. However, for 79-year-old Orsa Lindo, her motivation for earning her first university degree was entirely educational.

After graduating from a four year York University bachelor’s degree in Gender and Women’s Studies yesterday, she explained that her choice of study was driven by a desire to understand some of the changes that have taken place in conceptions of gender.

“With what’s happening in the world, now it’s not binary anymore,” Lindo told CTV News. “Male? Female? Forget it! That’s in my time. Now there is a whole new world out there: a world that we all have to understand. Gender and Women’s studies opens your eyes to so many things. It’s a beautiful subject.”

Lindo, who’s a mother of four and grandmother of five, was born in Jamaica and has called Canada home for the last 50 years. Previously she worked in the banking sector and as an ESL teacher.

Entering post-secondary education at a later age came with it’s share of challenges. In addition to brushing up on her computer skills with online courses, Lindo had to navigate an intimidating age gap between her and her classmates.

“I think at first you’re timid about joining in with a class of younger people,” she told CTV News. “But then as you go in, you realize that it’s not about you—it’s about what you want to do, what you want to learn.”

“Young people, they are beautiful once you get over the fact that they’re going to use the F-word quickly!” Lindo told CTV news, with a laugh. “Once you get over that and realize it’s not an awful word, you’re OK. Because, you know, as an older person, you say, ‘Oh my!’ They say, ‘F it!’”

Despite those differences in tact, Lindo made several friends that she says made her “feel younger.”

“I was really the youngest at heart, but oldest in age,” she told CTV.

Lindo isn’t finished with her educational endeavours, either. She says she plans to take piano lessons and learn Japanese and French as well.

For older adults like herself, who are in their retired years, she stresses the importance of staying engaged in life.

“They must get up off their fanny,” she told CTV News. “Some people at 65 retire and then retire from everything and suddenly they are looking from under the daisies because they have retired from life… As you get older, you have to keep interested in life. And if you don’t, you pay for it, because everything goes. They say, ‘Use it or lose it.’”