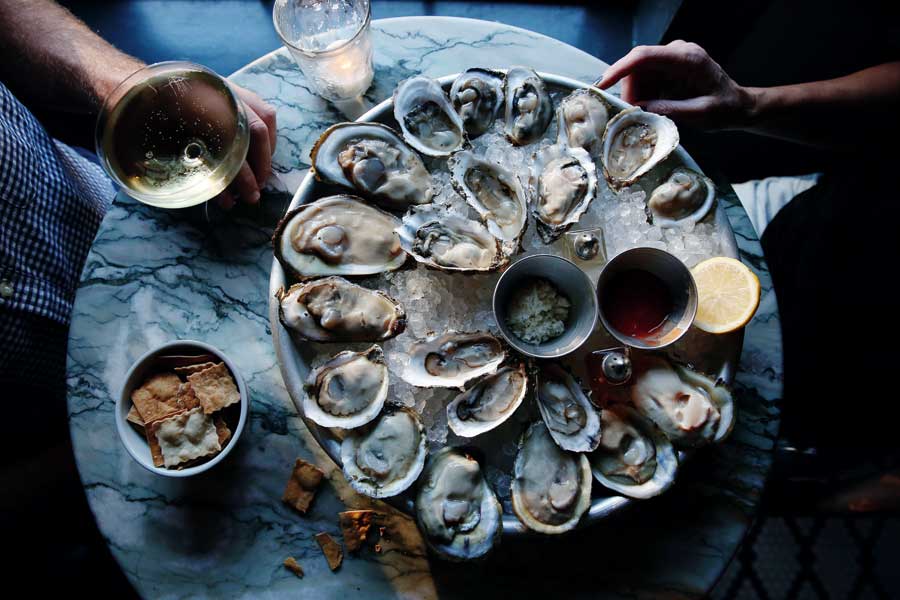 I was a late bloomer: I didn’t try my first oyster — raw or otherwise — until a friend introduced me to them eight years ago. He enticed me to a popular Toronto restaurant with a promise of fresh lobster, yet I left with a newly acquired hankering for this mollusk. I remember hesitantly trying that first one at his urging, sans sauce or horseradish: sweet, briny, with a mild fruity finish — I can taste it still. It was a Kusshi from Vancouver Island. You could say it was love at first slurp.

Since then, I’ve found myself following a slew of Instagram accounts dedicated to oyster farming. (That’s right, I double-tap every time an oyster pops up on my feed and I don’t care who knows it.) My oyster obsession isn’t rare, however. After reading everything I could get my hands on about the history of the mollusk, I discovered the art of shucking dates back thousands of years. In 2015, researchers from Leiden University in the Netherlands discovered a shell dating back 500,000 years with drawings scratched onto it.

“Perhaps our fondness for oysters is ingrained in our DNA — an evolutionary throwback to our basic needs of water, salt and protein,” suggests Patrick McMurray, the proprietor of Toronto restaurant The Ceili Cottage, in his book, The Oyster Companion: A Field Guide.

McMurray, who signs off emails with “Shuckingly yours,” is also the Guinness World Records title-holder for shucking with a record-breaking 39 oysters in one minute — that equates to approximately 1.5 seconds per shell.

At Ceili Cottage, I opt for a prime spot at the bar so I can witness McMurray in his element and get a first-hand glimpse of how a champion actually shucks an oyster.

Sliding the knife into the shell of a fist-sized Malpeque from Prince Edward Island, McMurray twists and effortlessly pops the oyster open with the slightest flick of the wrist, revealing the plump meat within. It has a mouth-watering effect on me. McMurray places the oyster on its half shell between my fingers. “A fresh oyster tastes of the ocean,” he says. “It should smell fantastic — like seaweed, earth and something very happy.” I nod and bring the tip of the shell to my lips before tossing it back. It tastes exactly as he’d described: pure happiness.

“The merroir [an oyster’s taste] is a snapshot of the bay — and day — it was harvested on,” McMurray tells me, as he plucks another shell from a bed of ice.

“No other food that I have experienced can give you such a reference to the place that it comes from. No other food is so perfect and complex in its singularity.” For example, he adds, “Kelly oysters from Galway taste of the air in the west of Ireland — the Cliffs of Moher, wet stone and the seaweed of Doolin Bay.”

Fortunately for oyster lovers — and soon-to-be converts — the numerous health benefits are an added bonus.

There are purportedly more than 200 species of oysters in the world, yet only a select number are cultivated for food. Those that we do enjoy with a pinch of horseradish or a dash of lemon zest are low in fat and high in protein, omega-3 fatty acids, vitamin B12 and the minerals iron, selenium and zinc. Oysters are, in fact, our best source of zinc — one mineral we don’t want to skimp on since it’s essential to immune health and function, helping us fight infection and disease.

“Literally, more than 100 per cent of your daily need of zinc is from one serving of oysters,” says Vancouver-based dietitian and wellness coach Jess Pirnak.

“We need about 10 milligrams a day of zinc, and oysters are 30 milligrams for a serving.” (A serving is roughly the equivalent of seven medium-sized oysters.) That same handful also provides you with 15 grams of easily digested protein and seven grams of carbohydrates.

Danielle Sanders, also a Vancouver-based dietitian, breaks it down even further. “Two and a half ounces of Pacific oysters would give you 24 milligrams of zinc whereas beef, which is probably your next best source, would only give you four milligrams. That’s a huge difference. Atlantic oysters from the eastern seaboard can have even double the amount of zinc as Pacific oysters with 48 milligrams.” Why? It’s likely due to the differing concentrations of minerals in the aquatic environment of where the oysters were harvested.

Zinc is also important for restoring body tissue. “As we age, our skin gets more fragile, too,” Sanders notes.

Oysters also have a long history as an aphrodisiac — you’ll recall the libertine Casanova credited his voracious sexual appetite to his fondness for the oyster — as well as a potent symbol of fertility and birth. We can thank their high zinc content for that, too. The mineral has been known to boost testosterone levels in both men and women.

As for the iron we get from oysters — almost as much as 40 per cent of our daily intake per serving — Sanders says that, although we don’t need more of it as we age, we still do need it to help transport oxygen to our organs and tissues as well as for the production of red blood cells. “If you don’t have proper red blood cell production, you will have low energy,” she says.

And despite what you’ve heard, oysters are always in season. Avoiding raw oysters in the months without the letter r is an outdated rule by about 500 years. “There is a little ditty scribed by an English monk in the 1500s about his local oyster, Ostrea edulis (European Flat), which, if you harvest them in those months without an r, you will decrease the stock in forthcoming years by about 30 million oysters,” McMurray explains. “But since the 1500s, we have advanced in refrigeration and transportation techniques. I can get Irish oysters flown to Toronto about 24 hours after being taken from the water.”

As Jonathan Swift quipped, “He was a bold man that first ate an oyster.” And thank goodness for that.

VIDEO: The Right Way To Select And Eat A Raw Oyster