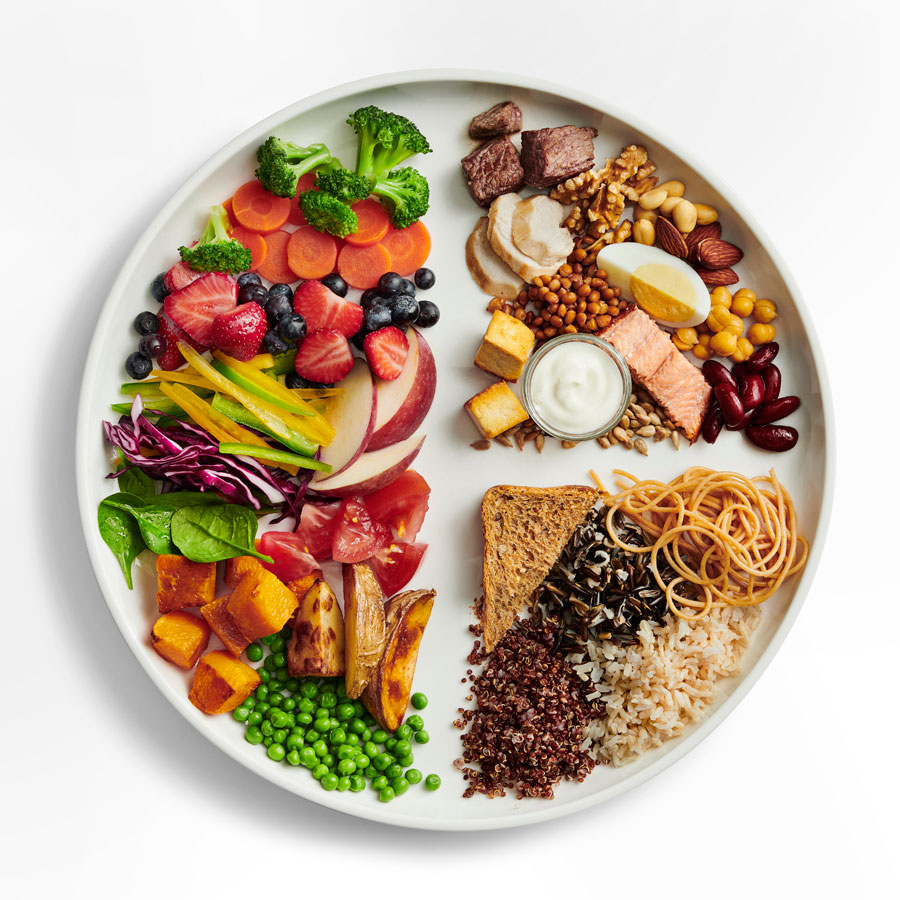 “Have plenty of vegetables and fruits” is one of the recommendations. To wit, produce takes up half the plate featured on the cover of the 62-page guide.

Dairy and meat have been incorporated into a new protein group that includes plant-based sources such as tofu and chickpeas. Health Canada’s advice is to “choose protein foods that come from plants more often.”

And rounding out the new three-group guide are whole grains.

“Canadians deserve an easy simple source of advice they know they can trust,” Petitpas Taylor said at the unveiling, held at a market in Montreal. Today marked the eighth time the guide has been revised since launching as “Canada’s Official Food Rules” in 1942.

Health Canada has been working on this latest iteration since the autumn of 2016, consulting with regular Canadians as well as stakeholders who they defined as “participants who are interested in or affected by Health Canada’s healthy eating initiatives.” That did not include food industry lobbyists.

But big meat and big dairy aired their grievances earlier this month in advance of the guide’s official release..

About the new protein group, director of nutrition and research at Dairy Farmers of Canada Isabelle Neiderer told the Globe and Mail, “Putting all those foods together in one food group sends the wrong message that these foods are interchangeable.” She insists that milk products provide nutrients such as calcium that average Canadians are often lacking.

And Alberta Beef Producers representative Tom Lynch-Staunton also expressed concern, telling the Globe and Mail, “That can be dangerous, especially if people think that they’re getting the same nutrient equivalency when they eat a serving, of, say, black beans, as beef.”

It turns out that sugar was also in the crosshairs. Health Canada made a point to endorse water as “the drink of choice” in its new food guide, advising Canadians to choose it over “sugary drinks.”

And although we can only wonder what’s happening over at the Canadian Sugar Institute, the sweet stuff has finally made a “naughty” list, of sorts.

Sugar is included in a group of things to limit along with sodium and saturated fat. Cutting back on processed foods and reading food labels are offered as ways to achieve this — and healthier eating, in general.

But just how much added sugar is in prepared foods will remain an unknown, for now. Health Canada has given food producers three years to introduce new nutrition labels with information such as processed sugar content.

I can bring to mind the Canada’s Food Guide to which I was introduced in primary school. There were four groups then — dairy and meat each having their own quadrant. Food choices were represented in darling illustration. And milk — including the chocolate kind — was always on the lunch menu.

Now, the food is real. And, from all accounts, as is the science.