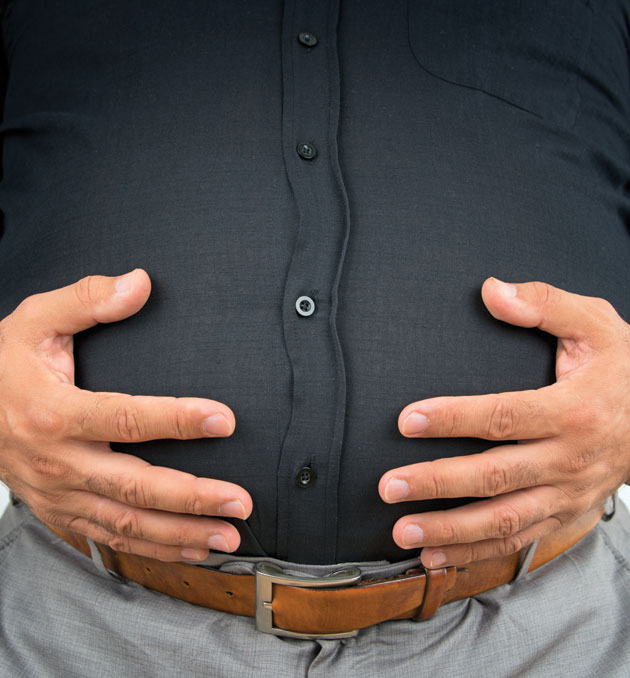 The first time you saw it happen, it happened to your grandparents. The second time, it was your parents. You thought, “Ha, not going to happen to me!”

We aren’t talking about divorce or hairlines here but waistlines. The diabolical “middle-aged spread” that we grew up fearing and always assumed was the sort of thing that happened to other people—namely, those lazy types who didn’t exercise, ate fast food and drank too much.

Then after 40, you felt it—a softening around the middle. Where did it come from? You weren’t eating more. You still exercised. Then at 45 and later at 50, that small amount of new fat had grown, and you saw your parents and grandparents less shapely bodies staring back at you in the mirror. What is going on?

One of the most important things to remember is that as we age, our basal metabolic rate goes down, so our ability to burn calories, even to maintain the same body weight, is less than it was 10 years prior and so, in general, weight gain is something that is age-related.

However, for women, age-related weight gain is not necessarily menopause-related.

“What women will notice in menopause is that the weight distribution is different and that there is more weight gain in that sort of central area—the waist,” explains Dr. Michelle Jacobson, a gynecologist at Women’s College Hospital in Toronto. “This is more related to the change in hormones around the time of menopause and more of the androgen, which is the testosterone—and other male hormones—to estrogen ratio that increases as the estrogen levels drop.”

So does that mean estrogen makes you thinner and the testosterone makes you fatter? Not that simple. According to Jacobson, having more estrogen changes the way your body distributes its fat. In general, men tend to gain weight around the waist, whereas women tend to put fat on in their hips and their thighs. But as women age and get past menopause, the ratios of testosterone to estrogen start to become closer to what they would be in a man, so the distribution of the fat changes, and more of it goes around the stomach.

“Anecdotally a lot of women will say at 40, ‘I really started noticing how hard it was to lose weight,’ and I think that it coincides in timing with when our hormones start to shift towards more of a perimenopause and then a menopausal range,” says Jacobson. “But it’s certainly not a black and white thing that happens at age 40. Women are like luxury cars. As they get older, we need to put a little bit more maintenance into them to keep them in good shape.”

As for men, they don’t have it much easier and are pre-programmed to have their excess weight collect on the upper body including the waist and the chest. This is known as “android” fat distribution. Explains Dr. John Aquino, medical director, Ontario Men’s Health, who has been a family physician for 25 years, with a focus on men’s health for the past 15 years: “The main cause that starts this process is our caloric needs decrease with age. We aren’t building new bone or muscle or growing like a teenager. And our intake of calories doesn’t always drop as we get older to match this lower need for calories. Plus, we tend to be less active overall as we age, and our body composition begins to change gradually to have less muscle.”

He adds that this decreased muscle mass is very important due to the cycle that begins. “Muscle is replaced with fat, and fat doesn’t burn as much calories as muscle.”

Hence the vicious cycle: we consume more calories than we need, so we gain weight at a time in our lives when we don’t build as much muscle. Then these new fat cells don’t burn off calories as efficiently as muscle cells do, so we gain more fat and so on and so on. “This, in the end, becomes the ‘slowing of metabolism’ in middle age, which is actually a complex cyclical process,” Aquino says, adding, “Testosterone is an additional kicker here for men. It is natural for levels to decline with aging. This is a gradual phenomenon, unlike the menopause in women, which is more abrupt.”

And given that testosterone helps build muscle mass, men are further predisposed to losing muscle. “Adding to this cycle,” he says, “is the fact that fat cells actually break down testosterone into estrogen, which builds more fat. So as we gain more fat, we lose more testosterone and therefore gain more fat … and on and on.”

“The possible reason for using hormone therapy is for the treatment of hot flashes and night sweats and other things, and we call these [major] symptoms among other symptoms of menopause, like low bone density, some people are able to use it to help with their mood fluctuations but certainly not for weight and again, because aging is really the bigger issue, the hormone therapy doesn’t replace or make our metabolic rate go faster.”

Similarly, treating testosterone imbalances aren’t the solution for male weight gain either. “Some men do have either a more critical drop in testosterone levels and have symptoms such as decreased energy, lower mood, poor concentration, low sex drive and poor sexual function as well as just an overall sense that they lack vitality,” explains Aquino. “For the right men, replacing testosterone can be very helpful to their quality of life, but this is not to say that all men need to go on testosterone replacement. Not at all.”

Other factors that contribute to middle-aged weight gain are genetics and mental health. Back to your parents and grandparents: just because you saw early evidence of your dad’s beer belly doesn’t mean you have to give up the fight—the right regimen of diet and exercise can counteract genetics for both genders.

As for mental health, explains Aquino, “Emotions play a big part in whether we are motivated to change our behaviours. If someone is very stressed or depressed, they might not want to exercise or diet, either for lack of motivation or failure to see it as a priority. Mid-life is often the intersection of stresses with parents, children, career as well as when people start focusing on regrets. Taking care of self can seem like an afterthought. And, of course, many people seek food as an emotional comfort.”

For women, perimenopause and menopause can often be an emotional roller coaster, and certainly there are many pharmaceutical choices on the market to treat anxiety and depression—for both men and women. But being in control of your weight and fitness—while easier said than done—is what most doctors order to ensure your passage into mid-life is a crisis averted. “The irony is exercise can be a more effective intervention to treat anxiety and depression than medications,” says Aquino. “But it’s difficult for people to get motivated and come to that realization.”

So the take-home message? Muscle burns more calories than fat and, once you get more muscle, it keeps you leaner with less effort—so get more muscle.