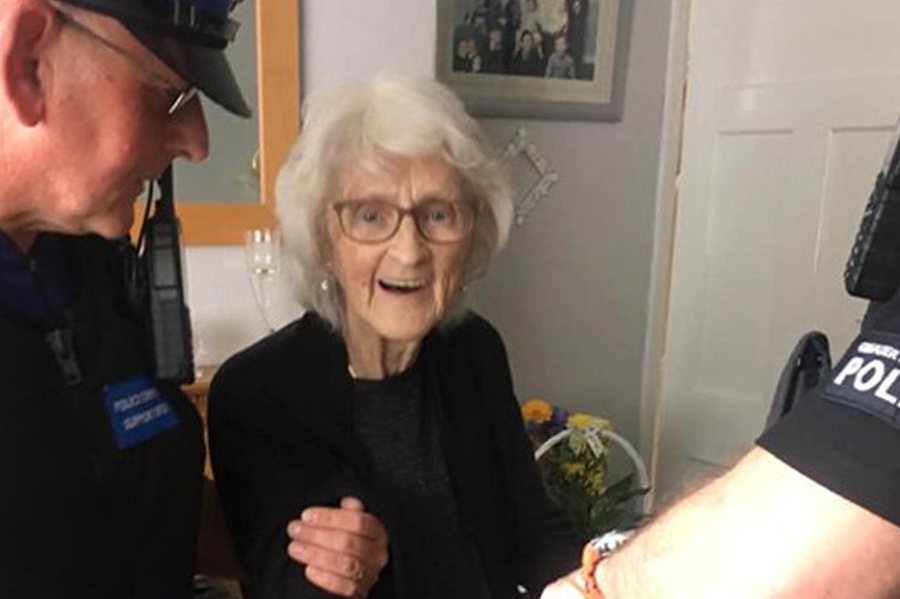 When you live a good, long life of playing by the rules and obeying the law, there’s only one reward you want to receive at the end of it — an arrest warrant. It’s true, at least, for Josie Birds, a 93-year-old woman arrested last Saturday in Manchester, England.

“She is 93 years old and her health is failing, and she wanted to be arrested for something before it’s too late,” Birds’ granddaughter, Pam Smith, wrote on Twitter, thanking the Greater Manchester Police for the gesture. “She has a heart of gold and thoroughly enjoyed it today.”

According to the BBC, Birds made the bucket list request to “know what it was like to be naughty” after a lifetime of good behaviour. The BBC story also notes that Birds has an astonishing, “six daughters, 20 grandchildren, 28 great-grandchildren and two great-great-grandchildren,” all of whom were presumably thrilled when officers from the Greater Manchester Police obliged the arrest request.

The takedown itself happened last Saturday, though no police chases or tense standoffs occurred. Instead Birds went peacefully when officers arrived at her home, handcuffs at the ready, to take their suspect in.

Of course the officers needed a reason for the arrest, so they reportedly accused her of robbing a store. Once handcuffed, the officers loaded the suspect into the van and drove her to the police station for questioning. Smith documented the proceedings on Twitter in a post that now has upwards of 23,000 likes, including the photos below of Birds in the back of the police van and awaiting questioning at the station.

“She wanted to go into the cells too,” Smith told the BBC, “but they drew the line at that and gave her tea and cake instead.”

It’s unlikely that offering tea and cake to robbery suspects is regular protocol for the Greater Manchester Police, but Birds appeared to have a great time with the whole proceeding nonetheless. Smith added in the BBC piece that Birds was “lit up all day Sunday talking about it, and she is still excited about her experience,” while the police force expressed their happiness in helping to fulfill the woman’s bucket-list wish.

And, for the record, the suspect was released from jail and all charges dropped.