The Biological Revolution Is More Than Just Impossible Burgers 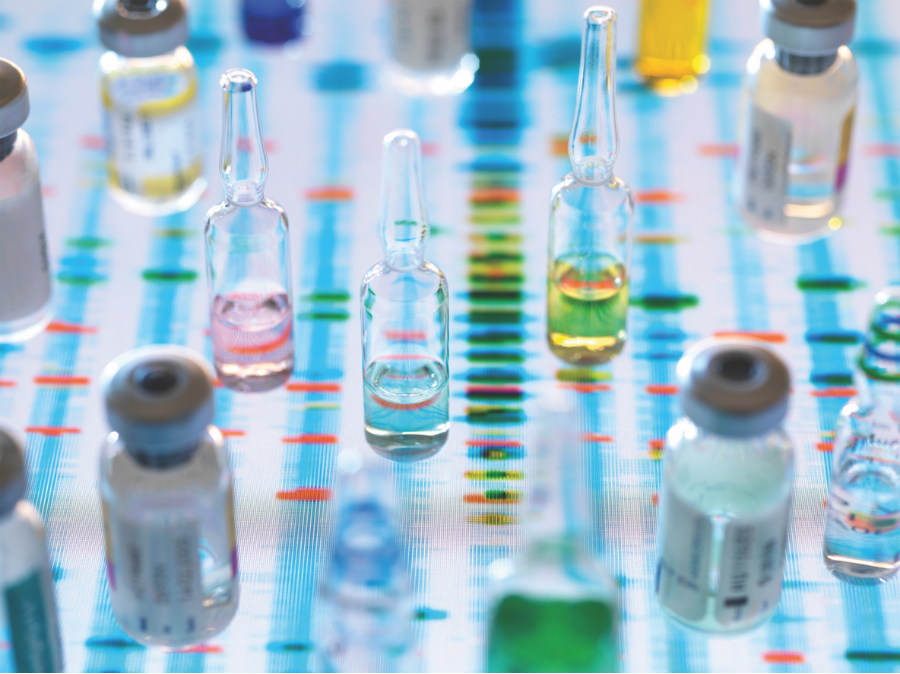 If you’re looking for signs that society has entered a new age of innovation, consider the South American groundcherry. Rich in fibre and protein, the tiny fruit may taste like pineapple and smell like a dream, but it’s a pain in the knees to grow. It hangs off a sprawling low-yield bush and often falls to the ground before it ripens. In October 2018, however, U.S. scientists announced that with the latest gene-editing technology, they had swiftly accomplished what selective breeding and even old-school genetic engineering would take ages to pull off: creating a tidier bush with larger fruit that’s easier to mass produce. It could be the next quinoa.

Around the same time, biomedical engineers at the University of Utah announced they’d overcome a major hurdle in the field of tissue regeneration — unveiling a method to churn out human replacement tissues with a 3D printer. By taking stem cells from a patient’s own body fat, growing them into different cell types and layering them in specific patterns on hydrogel, the researchers say they can “3D print” custom tendons, ligaments and spinal discs for human implantation.

From redesigning plants to reproducing body parts, examples of humanity using its machines to modify life seem to be rolling out of labs like widgets from a factory. High tech has handed science the capacity to quickly and cheaply crack the genetic code of virtually any organism and to mimic or manipulate it in any number of ways.

To the cultural soothsayers of our time, it’s unleashing a bio-industrial juggernaut, one that will not only reshape the world around us, it will reshape us – rebooting the human body with inventions and interventions that improve health, intelligence and lifespans.

“We are sequencing our genomes, we are mapping our brains, we’re harnessing things like DNA and bacteria and viruses and yeast in order to create new species, new opportunities, new energy sources, new drugs, new therapies. We are evolving ourselves,” said Jane Metcalfe, who calls it “the neobiological revolution.”

Metcalfe, who 26 years ago co-founded Wired magazine, the American monthly that chronicles how computing technology is changing the world, describes this new frontier as the next phase of the digital revolution, when the latest advances in tech and biology combine “to alter the human race.”

During her talk last summer at the ideacity conference [a ZoomerMedia property], Metcalfe said she is so convinced this revolution will change life as we know it that she was compelled to jump back into the media business. In 2017, she launched Neo.Life, an online magazine and weekly newsletter, to chart its progress – and she believes it will be progressive. She sees doctors deleting inherited disorders at their genetic root to spare the suffering of future generations while also curing the diseases of aging and extending life.

“This is Homo sapiens seizing control of our own evolution.”

Over the last century, the dramatic increases in life quality and expectancy came largely on the back of public health measures, sanitation, immunization, better housing and nutrition. But in the 21st, when Silicon Valley has joined the longevity hunt and tech titans and billionaires are racing to cure aging itself, observers like Metcalfe predict any future gains will flow from novel therapies and gadgets that upgrade the human operating system at the level of cells and DNA.

This might have once sounded like the stuff of science fiction, but dazzling new technologies have placed it in the realm of possibility. For starters, advances in the sequencing machines used to decode DNA have reduced the job from years to hours and for a sliver of the price it once cost. (Unravelling a human genome rang in at $3 billion in 2000, and it’s expected to fall to less than $100 within five years.)

As Metcalfe pointed out, the declining costs have allowed millions of people to become biohackers as they decode their own DNA. And through their smartphones, Fitbits, Apple watches and other wearable devices, they track their movements, vitals and metabolism, generating a massive trove of bio-data to be mined. Cloud computing has emerged as the virtual warehouse to store it, and artificial intelligence is poised to make sense of it all.

In aging research, artificial intelligence is expected to be a major boon. With so many biological and environmental factors influencing the aging process over time, AI is now seen as the guide that will show humans how to slow their own clocks or perhaps even turn them back. Which is why biotech, drug companies and academic institutions around the world have forged new partnerships to collaborate on ambitious longevity projects that rely on AI, the branch of science that enables computers to learn and solve complex problems without being explicitly programmed to do so.

“The systemic and multifactorial nature of aging explains why understanding its biology and mechanisms are so complex …. The attractive feature of AI is its ability to identify relevant patterns within complex, nonlinear data,” writes Dr. Alex Zhavoronkov, lead author of a new report in the January 2019 issue of Ageing Research Review. As CEO of the Baltimore-based Insilico Medicine, which develops AI for aging research, Zhavoronkov and colleagues say that AI accelerates the identification of biomarkers of age and the development of new compounds to act on them.

At the same time, any aging-related markers could also be targets for CRISPR. Copied from the genetic defence system of bacteria, CRISPR works like a pair of molecular scissors that can splice and dice DNA with swift and unprecedented precision. Already used to remake the groundcherry (and, in experiments, alter a zoo’s worth of creatures), it has raised the possibility of remaking human DNA to counter the body’s normal degeneration. As Harvard biologist George Church recently told the MIT Tech Review, the idea is to “have the body and mind of a 22-year-old but the experience of a 130-year-old.” Church and colleagues are pursuing that idea through Rejuvenate Bio, a start-up working first on genetic tweaks that would reverse aging in dogs.

Genetically modified human life may still be a distant goal, but in the age of biotech 2.0, researchers are well on their way to using life – neurons, genes, cells – to build and modify machines – among them, nanorobots constructed out of DNA strands that are programmed to deliver drugs to specific places, supercharge immune systems and destroy cancerous tumours. The California start-up Koniku has fused live mice neurons with a silicon chip to create a small computer that’s programmed to smell explosives, potentially sniffing out threats for the military or airport security.

“Biology is technology,” Koniku’s founder Oshi Agabi said when he unveiled the modem-sized device in 2017. His company is now trying to scale it up to be the brain of future robots.

To keep up with artificial intelligence, Elon Musk believes humans will have to evolve into cyborgs with implants that connect their brains to a computer. It’s an interface technology that Musk, the business magnate behind SpaceX, Tesla and the roots of PayPal, is hotly pursuing through his new enterprise, Neuralink.

Meanwhile, the field that aims to turn other life forms into machines is flourishing. With synthetic biology, scientists assemble synthetic components of DNA to make genes, or whole genomes, that can perform specific tasks. Work is underway to retool bacteria to pump out clean energy, rubber for tires that self-replicate and fabric that really breathes. It has already had a breakthrough product with baker’s yeast redesigned to produce artemisinin, a life-saving malaria drug often in short supply.

In so-called cellular agriculture, it could lead to animal products – think milk or cheese – that never involved animals. A few people in Europe have already taken the first bite of a lab-grown hamburger, stitched together from proteins derived from cow stem cells. Just a few years ago, one synthetic patty had the indigestible price tag of more than $300,000. Today, it rings in at $12, just a few dollars more than a Happy Meal but with a dramatically smaller environmental hoof print.

The neobiological revolution, Metcalfe says, has the potential to lead to “the most efficient and most effective way to manage our land and water resources … and to create maximum nutritional value” and just might save the environment.

Of course, not everyone shares the optimism. The U.S. Defense Advanced Research Projects Agency, for example, is funding a project to genetically alter aphids, leafhoppers and white flies to spread engineered viruses among plants to accelerate their growth. Dubbed the “Insect Allies” initiative, its stated aim is to create a flying army of modified bugs to protect key crops, such as wheat or corn, against natural blights or droughts or, if need be, a sudden biological attack.

But a group of European researchers warn the program “may be widely perceived as an effort to develop biological agents for hostile purposes.” Writing last fall in the journal Science, they lamented the lack of discussion around the program’s details and how the best practices and rules, “which have contributed to keeping our world largely free from the use of devastating biological weapons for over 60 years, may be seriously undermined.”

So, what might society expect of this next phase, a revolution that not only stands to change how humans work, learn and live but one that aims to change humans themselves?  Its arrival has spread high hopes for longer, healthier lives but also concerns that humans are seizing the reins of evolution, driving us toward a soulless future and designer babies.

In July, an influential group of scientists in the U.K. concluded that DNA editing of human embryos could be “morally permissible.” The Nuffield Council on Bioethics report said while it would largely be used to cure disease, it could also become an option for parents who want to “influence the genetic characteristics of their child.” They did not rule out cosmetic tweaks that might affect height, eye or hair colour or other perceived enhancements.

In her talk, Metcalfe included a slide of two buff beagles made in China. Bred with the help of CRISPR, the dogs were a product of an experiment in which researchers knocked out a gene that normally restricts muscle growth. Without this gene, muscles can theoretically blossom to Herculean proportions, perhaps, she mused, to give us the world’s future athletes.

While she acknowledged concerns that this new age of biology does have the potential to cause harm, she said, “The vast majority of scientists working with this technology are highly ethical and highly aware of the ethical ramifications of their work, and they’re highly regulated.” But much of the work is going on outside of the U.S. in places you wouldn’t expect. “No matter what regulations we pass, we can expect that somebody, somewhere is going to be working on it in spite of the regulations.

“The genie is out of the bottle on this stuff.”

While the notion might make some people uncomfortable, Metcalfe noted that the arrival of the first test tube baby in 1978 brought wide condemnation as being unnatural. But more than eight million people have been born through in vitro fertilization since then, and the procedure is considered a basic right. Similarly, she said, the new technologies on the horizon will also force another reckoning of what’s considered “natural.”

“What morally ambiguous biotechnologies are we confronting today that in the next 30 or 40 years we’ll consider natural or a basic human right?”