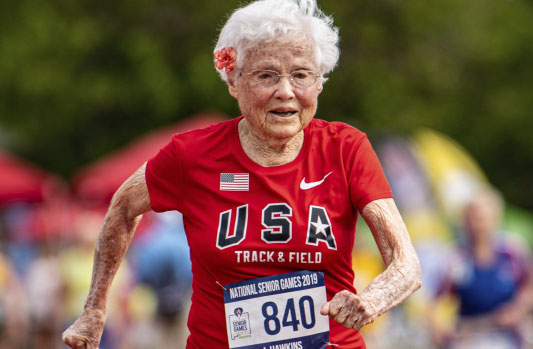 Julia Hawkins, 103, competing at the National Senior Games, where she ran both the 50 and 100-metre dashes. (Photo: CTV/Twitter)

Her name is Julia Hawkins, but they call her “the Hurricane.” She earned the nickname for setting a speed record in the 100-metre dash at the U.S.-based National Senior Games two years ago. But “the Hurricane” is also the epitome of the old adage “it’s never too late” because not only is she 103 years old and still a competitive runner, but she only came to take up running at age 100!

In a recent interview with The New York Times, Hawkins noted that, “I always did Senior Olympics in biking,” but when she got to the age where biking up hill became too difficult — around age 100, by the way — she gave it up.

And that’s when, instead of kicking off the second century of her life with a bit of rest and relaxation, she turned to running. “The first time I went to look at it and try, it was the 50-yard dash. It was fun and I fell in love with running.”

Hawkins took part in both the 50 and 100-metre dashes at the National Senior Games last week, “largely competing against herself” in the centenarian age group, according to the Times, and coming up just short of her record time of 39.62 seconds for the latter dash, which she set at age 101. But the publication notes that, “she is believed to be the oldest woman to formally compete on an American track.”

The Louisiana native, who is also a great-grandmother and was married to her husband for 70 years, said she trains for the races at home on her street but that “I feel like I only have so many … dashes left, and I don’t want to waste them in practice.”

And while she can’t teach everyone else to run like her at age 103, she did offer the Times some advice on increasing longevity to ensure you’re around to run a race at 103.

“Keep yourself in good shape if you can. Have many passions. And look for magic moments,” she said. “That is something that I have done in my life — think of the things that are magic moments that happen to you, like sunsets and sunrises, rainbows, beautiful birds, music and people’s lovely comments to you. All of those are magic moments and they are free for all. Be sure to keep your eye open for them.”

And as for the “Hurricane” nickname, she admitted that she isn’t particularly fond of it, given how many destructive hurricanes rip through her home state of Louisiana each year. Instead, she told the paper she’d prefer a nickname related to flowers, which she enjoys gardening at home.

In that case, we’ve found the perfect flower for her. It’s beautiful, a perennial — much like Hawkins herself — and described as “carefree.” And its name is even more appropriate for this record-setting runner: the Speedwell flower.

How Longevity Explorers Are Tipping Technology in Favour of Seniors

World Senior Citizen’s Day is celebrated on Aug. 21. It was first proclaimed by the General Assembly of the United Nations on December 14, 1990.