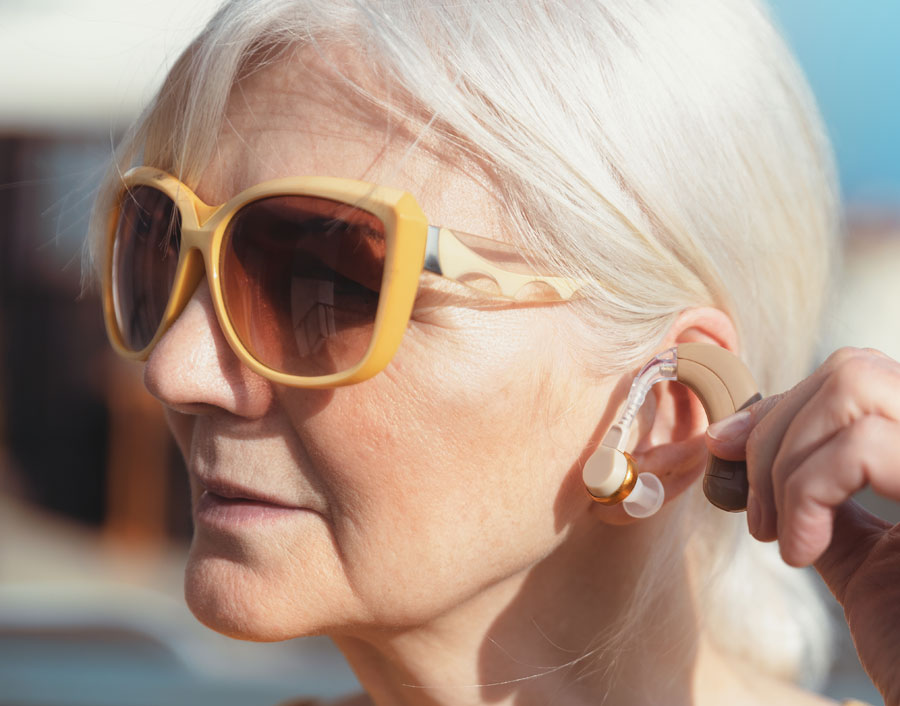 Over-the-counter hearing aids are disrupting the industry with online tests that cut out the audiologist and save users thousands of dollars. Photo: simpson33/Getty Images

When the family gets together this holiday season, we’ll all be yelling at each other. We don’t yell because we’re harbouring resentments about being the less-favoured sibling or because we’re arguing about politics. No, we older cousins shout at each because we don’t hear so well.

The younger generation yells because they’re making fun of us yelling. They think it’s a hoot to mock us by shouting,  “Eh? What? What’d you say? Talk louder! Speak up!”

Getting deaf as we age — there, I said it — is a family trait. Our parents and grandparents experienced hearing loss that began in their 60s and just kept getting worse. One cousin already wears a hearing aid but just for work. Another refuses to acknowledge his hearing loss enough to do anything about it.

Me, I’ve started investigating what’s out there to help me hear more clearly the conversations at family gatherings, restaurant dinners and festive parties this holiday season. It no longer has to be as straightforward as making an appointment with a licensed audiologist who will then order, fit and adjust the prescribed hearing aids at a cost of more than a few thousand dollars. Besides the cost and the nuisance of hearing aids, there’s the stigma: hearing aids are for deaf old people. Earbuds, however, are for cool hip trendy young people. (Thanks, Apple, Jabra and Skullcandy!)

Guess which I prefer!

Just as online merchants have disrupted retail markets, including eyeglasses, now there are hearing assistive devices available online, too — and in some cases, over the counter. Technology now allows users to amplify sounds in a personalized way, enhancing directional hearing and dampening background noise, for example. And government regulations are catching up.

In 2017, U.S. Congress outlined requirements for over-the-counter hearing aids, with the Food and Drug Administration (FDA) expected to publish proposed regulations in August.  Canada will likely follow suit, says Steve Aiken, past president of the Canadian Academy of Audiology and associate editor of Canadian Audiologist.

Over-the-counter hearing aids might work for some people, but “We need to figure out the right way to do it,” he says.  “Most audiologists love the idea of improving access, but we don’t want to make health care worse in the process.”

He explains hearing loss is different from simple vision loss that is easily corrected by glasses. “That said, a self-fit device might be suitable for people who have just mild hearing loss.” He suggests consulting an audiologist first to make sure a direct-to-consumer or over-the-counter device is suitable.

What of the devices now being sold online and at stores in Canada? Most are not true hearing aids but rather belong to a category known as a personal sound amplification product (PSAP). Dozens of these devices sold as “hearing amplifiers” or “sound enhancers” are listed on Amazon.  Most of the cheaper ones simply make every sound louder, but several are being touted as true hearing aids.

One company getting a lot of traction in Canada is Audicus, an American start-up. On its website, it promotes its devices as “online hearing aids made quick, simple and affordable.” The company says it keeps costs down by eliminating the middleman — in other words, the audiologist — who charges you for the hearing aids, as well as a dispensing fee that covers fitting, adjustments and programming the devices.

Audicus hearing aids are programmed by the company, based on free hearing tests administered online. Any re-programming requires sending them back to Audicus. On its website, the company says about eight per cent of its customers are Canadian.

Eargo and Embrace are two other direct-to-consumer hearing aid brands available online and marketed to people with mild to medium hearing loss.

Nuheara is a three-year-old Australian start-up that sells IQbuds Boost earbuds that, according to its website, “allows you to adjust how you hear in different environments.” But they are not “a hearing aid nor a medical device,” Nuheara marketing director Cheryl Hart says in a telephone interview. “They solve the problem of that just-need situational help before you need a hearing aid, like readers for vision,” she explains.

“Our proprietary hearing assessment through the app measures frequencies in both ears and shows where you have mild hearing loss and compensates for that.”

The IQbuds Boost look exactly like the wireless ear buds people use to listen to music and podcasts. They can also be paired with IQstream TV, a tabletop device connected to the TV that allows users to use a smartphone to control volume independent of the volume set on the TV.  Nuheara products are available at many Best Buy stores in Canada as well as online.

Another company offering hearing enhancers is not new to the sound scene. Bose sells a product called Hearphones, described as “conversation-enhancing, noise-cancelling headphones.” Sold online, the earbuds are attached to a neckband and can be controlled by an app.

The market for hearing devices “is kind of a mishmash right now,” Aiken acknowledges.  “The important thing is that you have a proper hearing test.” The online hearing tests offered for free by some companies may be a useful screening tool  — “a rough guideline as to who might have hearing loss,” although he says “they’re not the same quality” as hearing tests given in person by an audiologist.

The big issue, Aiken says, is how many people have hearing loss but “just aren’t doing anything about their hearing. They struggle. They don’t want to get a hearing aid.”

And yet, he notes, “We’ve learned that there’s a link between hearing loss and cognitive decline. Hearing loss is the largest potentially modifiable risk factor for dementia. We don’t know yet whether hearing aids change that but we do know that hearing loss is linked to social isolation and increased risk of falls.”

That’s why, he says, “There is room for OTC hearing aids if it’s done right, if the devices are good and if the right people are getting them.”

I haven’t decided yet whether to try the Audicus online hearing test, whether to try Nuheara IQbuds Boost for its 30-day tryout, whether to just go ahead and make an appointment with an audiologist or whether to wait until the new over-the-counter regulations go into effect to see what is approved by the FDA and, subsequently, Health Canada.

In the meantime, if you happen to meet up with me over the holidays, please adjust your volume and talk a little louder!
RELATED: Elton John Concerts Use App to Help Hearing-Impaired Guests