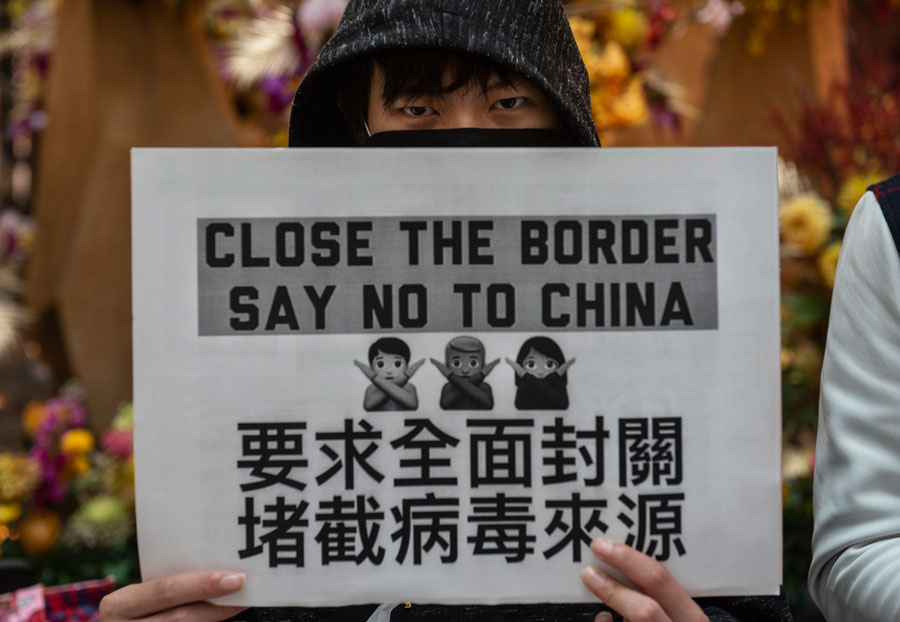 Dozens of demonstrators joined striking hospital workers to urge the government of Hong Kong to close border crossings with mainland China after a 39-year-old man who recently travelled from Wuhan died Feb. 4 of the coronavirus, the second fatality outside China. Photo: Miguel Candela/SOPA Images/LightRocket via Getty Images

As novel coronavirus, which the World Health Organization has officially named COVID-19, continues to spread, with more than 76,000 confirmed cases and 2,250 deaths, what we know and don’t know about the epidemic changes almost daily.

China’s death toll from COVID-19 is already seven times that of the Severe Acute Respiratory Syndrome (SARS) outbreak in 2002/03. That epidemic also originated in China, killing 349 people within its borders and another 425 around the world, including 44 in Toronto. The majority of deaths have been recorded in Hubei province and the city of Wuhan, the epicentre of the novel coronavirus outbreak.

COVID-19 has also spread to 31 other countries, more than that affected by SARS. And the number of deaths reported outside mainland China reached 14 on Friday, occurring in South Korea, Iran, France, Taiwan, Japan, Hong Kong and the Philippines as well as two Diamond Princess cruise ship passengers, an 87-year-old man and an 84-year-old woman, both of whom had pre-existing medical conditions.

The instance of the virus in Canada rose to nine on Thursday with British Columbia’s health officer Bonnie Henry announcing the province’s sixth confirmed case, a woman in her 30s who recently returned from Iran, where 28 people are reported to have tested positive for the virus with nine reported to have died . Henry described the case as a “relatively milder form of the disease” and said the risk of novel coronavirus spreading in B.C. remains low. The woman is in self-isolation at home. Of the nine cases in Canada, three of which were reported in Ontario, three have been resolved. A person is deemed fully recovered with the resolution of symptoms and two negative test results taken 24 hours apart.

None of the 400 Canadians evacuated from Wuhan, China and currently quarantined at the Canadian Forces Base in Trenton, Ont., 170 kilometres east of Toronto, have tested positive.

Outside the country, 47 Canadians who were aboard the Diamond Princess, quarantined off Yokohama, Japan on Feb. 3, have tested positive for the virus. They are undergoing treatment at local hospitals. There were a total of 256 Canadian passengers, 129 of whom arrived in Trenton early Friday on a chartered plane. They were transported to the NAV Canada Training Institute in Cornwall, Ont., where they will remain in quarantine for 14 days. Canada’s Health Minister Patty Hajdu said on Thursday that healthy passengers who choose to leave Japan by their own means will also face a mandatory 14-day quarantine period upon return.

Here, what we know about the virus so far.

Belonging to a family of viruses that include the common cold, influenza and SARS, this new, or novel coronavirus is named for spikes on its surface that resemble a crown, which allow it to attach to cells in the lungs and duplicate. Cases began to appear in late December in the Yangtze River port city of Wuhan, centred around the Huanan Seafood Market, where wild animals were sold for human consumption.

By the end of January, Chinese scientists had sequenced its genome, which showed it had more in common with two bat-related SARS-like viruses that originated in eastern China in 2018 than SARS and the Middle East Respiratory Syndrome (MERS). The results suggested the virus may have originated in bats but was likely transmitted to another animal before jumping to humans. Researchers believe the intermediary may have been a pangolin — a scaly mammal, which is said to be eaten and used for medicine throughout China and other countries in Asia although officially its trade is illegal.

What is the incubation period?

Researchers are racing to pin down characteristics of novel coronavirus, including the incubation period. Although it was initially thought to be three days, a study by Chinese researchers, published in the New England Journal of Medicine, puts incubation at 5.2 days. The exact figure may still be a moving target, but there has been consensus that it can be as long as 14 days.

Symptoms usually start with a fever, followed by a dry cough, can include sore throat and difficulty breathing. Early evidence prompted warnings that people can spread the virus before they have symptoms. However, findings of “asymptomatic” spread has since been described as flawed. German researchers claimed a woman from Shanghai, who was otherwise well, triggered a chain of infection in that country but German health officials later established that the woman was already feeling mildly ill when she met with colleagues near Munich.

How does it spread?

Coronaviruses are zoonotic, which means they can pass from animals to humans. Similar to SARS, the novel coronavirus can also pass from human to human, most often through droplets spread by sneezing and coughing. But Chinese researchers have reported finding fecal-oral transmission possible, warning medical workers to protect themselves against vomit and feces from infected patients. And Chinese health authorities urged vigilance by washing hands frequently, especially if citizens had mildly ill family members at home with them.

What is the risk?

The Public Health Agency of Canada (PHAC) says the risk associated with novel coronavirus is low for Canadians. To date, the seven cases in Canada are either patients who have travelled to Wuhan or who have had contact with persons from Wuhan.

According to global figures, 18,903 patients have recovered from novel coronavirus but treatment remains largely supportive. It’s not yet known if existing antivirals — used only for the sickest people — are effective at all.

Early reports from China attributed most of the deaths to elderly people with respiratory issues. A recent study released by the Chinese Centre for Disease Control and Prevention showed that of 1,023 deaths recorded through to Feb. 11, most were among people aged 60 and older, and many had other medical conditions such as hypertension, cardiovascular disease and diabetes. Dawn Bowdish, the Canada Research Chair in Aging and Immunity, says one of the reasons older people can get sicker is comorbidity, which refers to pre-existing conditions.

“Type 2 diabetes causes your white blood cells to function less effectively. We call it immunometabolism. So there’s a real link between the immune system and the metabolic system, and older adults are at increased risk for Type 2 diabetes or have pre-diabetes.”

Our immune system, which can wane with age, is also a factor.

“Older adults tend to have higher amounts of the virus because they can’t get rid of it as much, and it tends to infiltrate deep into their lungs. Without a really robust immune system, it’s really challenging.”

Her advice for those who have chronic health conditions like Type 2 diabetes is to keep their conditions managed.

“People who have Type 2 diabetes are more likely to be infected. But people who have well-managed disease — they keep their blood sugars stable — are always better off. Similarly, for people who have heart disease, keeping it well managed with exercise and healthy eating, that helps.

“[And] keeping your muscle mass. Because when you’re sick and you can’t eat, that’s what your body uses as energy. So building muscle helps older adults deal with infections. For this particular virus, stay away [from it] is the best advice.”

Mask or no mask?

Wash your hands often and thoroughly – for at least 20 seconds – with soap and water or use an alcohol-based sanitizer. It’s not rocket science, but it is the No. 1 piece of advice from health authorities and experts.

As for wearing a medical mask or a N95 respirator, Dr. Mark Loeb, a researcher and professor at McMaster University in Hamilton who specializes in pathology, molecular medicine and clinical epidemiology, says health-care workers are the only ones who need cover up.

“Health-care workers should use some sort of mask, either a medical mask or a N95 respirator if they are performing aerosol-creating procedures, like bronchoscopy or intubation,” said Loeb, who helped with Ontario’s response to SARS 16 years ago and led a study into best practices for reducing transmission rates.

“The evidence [for] people on the street having to wear a mask is zero. General public: total waste.”

Buying up masks just depletes the stock for people who need them.  “Particularly for people who are getting N95 respirators — that’s an extra waste. If you have people walking around Toronto wearing a mask, it doesn’t make sense because the risk is so small.”

Even during SARS, he noted the people who were getting infected were health-care workers directly exposed to patients.

“People walking down Yonge Street were not at risk of getting SARS.”

Bowdish echoes Loeb, while also pointing out that mask quality can make them even less effective.

“The cheap ones that you buy are not as effective as you’d want them to be. Don’t touch your face. Wash your hands. Don’t go anywhere where people are sick. …  don’t go anywhere if you’re sick. Don’t let your friends and family go to work when they’re sick. Those are the best practices. And get your flu shot because in our country, influenza is going to cause more deaths than the coronavirus ever will.”

To her point, seasonal influenza contributes to more than 3,000 deaths annually in Canada.

The health risk related to novel coronavirus is also low for Canadians travelling abroad, with one exception. Global Affairs Canada advises against all travel to Hubei province, including Wuhan city, as well as non-essential travel anywhere in China.

Canadian health officials are also advising travellers who have returned from the Hubei province of China to go into voluntary self-isolation for up to 14 days. And if they’re returning from elsewhere in China, to stay home if they experience any symptoms.

Although wearing a medical mask during flights may give you some protection, Loeb says the benefit can be negated as soon as you put your hands under the mask to scratch or eat.

“Wash your hands. That’s the best advice. These viruses are on things, people touch things and then they touch their mouth and noses and eyes. And carry an alcohol-based sanitizer for when you don’t have access to soap and water.”

Highlighting its importance, a study published in the journal Risk Analysis, just before the outbreak began in late December, estimates that improving hand washing rates in just 10 of the world’s leading airports could significantly reduce the spread of many infectious diseases — and authors say that applies to this outbreak as well. They estimate that on average, only about 20 per cent of people in airports have clean hands — washed with soap and water, for at least 15 seconds, within the last hour or so. The other 80 per cent are potentially contaminating everything they touch with whatever germs they may be carrying.

The fallout in Canada

In Markham, Ont., where 46 per cent of residents identify as ethnically Chinese, a restaurant called Wuhan Noodle 1950 was reporting prank callers asking if they had bat soup on the menu, while racist comments that spread on social media resulted in the loss of  two-thirds of its customers.

In Vancouver, a video posted to Instagram five days ago showed a white man telling an Asian woman, “You dropped your coronavirus.”

“These actions create a divide of us versus them,” Dr. Theresa Tam tweeted on Jan. 29. “Canada is a country built on deep-rooted values of respect, diversity and inclusion.”

1/5 I am concerned about the growing number of reports of #racism and stigmatizing comments on social media directed to people of Chinese and Asian descent related to #2019nCOV #coronavirus. #EndStigma pic.twitter.com/xpueZTcNn9

During the 2002-03 SARS epidemic, there was documented prejudice against Chinese- and Southeast Asian-Canadians. Some people in those communities reported losing their jobs or being threatened with eviction. Tam says one of the ways to avoid repeating those mistakes is staying informed. Here are some credible sources for up-to-date information.