Drink Up: Weighing In On the Latest Health Craze in a Cup 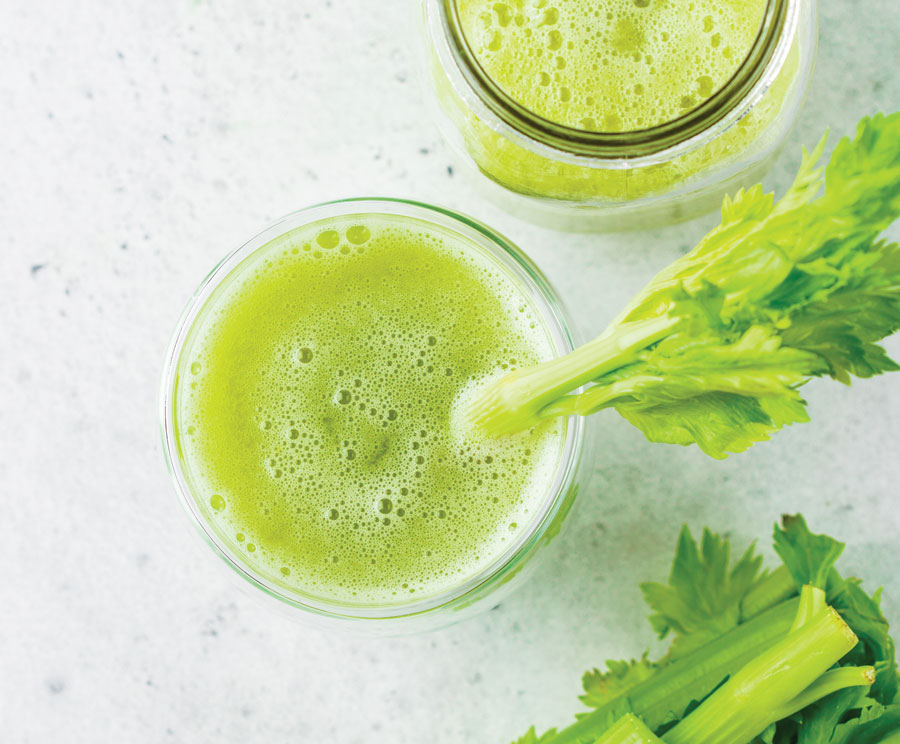 Trendy new beverages often create buzz because of the supposed health benefits, especially when they’re mentioned on social media. “They’re given hype by influencers, so people want to try them,” says Théa Demmers, a registered dietitian at Concordia University in Montreal. But drinking your calories may often mean taking in extra sugar or falling short on dietary fibre. Besides, not all these concoctions have evidence to support their health claims – some even carry risks. We’ve got the juice on five of the latest liquid fads.

Kim Kardashian tried celery juice for her psoriasis. Miranda Kerr says it gives her more energy and eases indigestion. But celery is 95 per cent water, so any purported benefits such as reduced inflammation and fatigue are likely due to the extra hydration. On the downside, any time you juice a fruit or vegetable, you remove essential fibre. “This can impact our gut bacteria long term,” says Demmers. Those friendly microbes rely on fibre for food, so you won’t do your digestive system any favours if you starve them. You’re better off eating celery sticks or try water with a squeeze of lemon – Kardashian admitted on Instagram that the beverage tasted “pretty gross.”

Mushroom coffee and other mushroom-supplemented foodstuffs are listed on Pinterest’s 100 trends for 2019. According to product manufacturers such as Four Sigmatic and Terrasoul Superfoods, cutting coffee with powdered mushroom can boost your energy, brain power and immune system. Unfortunately, these health claims aren’t based on solid research. Sure, mushrooms contain antioxidants, but so does the coffee they’re replacing. “It is not clear whether the antioxidant content of mushroom powder found in mushroom coffee is higher than what you would find in fresh, raw mushrooms,” adds Demmers. Mushroom coffee might be an option, though, if you want to reduce caffeine – and if you also happen to be someone who sees the charm in instant coffee.

This fermented form of tea made with sugar, yeast and bacteria has been spotted in the hands of celebrities like Jake Gyllenhaal and Lady Gaga. Kombucha contains probiotics, bacteria that help the digestive tract do its business. It’s not the only way to get more of these gut-friendly microbes – you can eat yogurt or sauerkraut – but fans of kombucha claim the drink also fights conditions like cancer and hypertension. There isn’t strong evidence to back up those claims, however. But if you do want to test kombucha’s probiotic benefits and plan to ferment your own at home (you can buy starter kits or find instructions online), be mindful of possible contamination. The temperature, humidity and other brewing conditions are an ideal environment for mould or harmful bacteria growth. It’s recommended to use glass, stainless steel or new plastic containers and “run your equipment in the dishwasher at a high temperature,” says Demmers.

We’ll give you this one, Gwyneth Paltrow. Turmeric contains curcuminoids, compounds with well-established anti-inflammatory properties. Curcuminoids also give turmeric-based curry dishes and stews their yellow hue and, as such, will transform your latte or milk into a burst of morning sunshine. “The antioxidants in turmeric are best absorbed with the vehicle of fat,” says Demmers, so having it with a milk product can actually help you reap its benefits. Furthermore, turmeric is being investigated for a potential role in cancer treatment, diabetes control and memory preservation, among other uses. It’s early days, but results so far are promising. And benefits have been seen in as little as a gram a day, so no need to overdo it – too much turmeric can cause diarrhea, constipation or upset stomach.

It may feel wrong to gulp down something that looks like it was siphoned from a brackish swamp. But those who’ve tried charcoal mixed with water or lemonade say it doesn’t change the taste much. And if you believe Dr. Josh Axe, naturopath and author of Eat Dirt, it’s a natural way to absorb the chemicals and toxins that he believes can build up in your body (conventional medical wisdom believes the body detoxifies itself). Activated charcoal is, after all, a standard treatment for accidental poisonings. The problem, though, is a lack of proof that drinking it is good for you. It’s not advisable to try activated charcoal without talking with a health-care professional, says Demmers, as it interacts with a long list of medications, including lithium, lorazepam and codeine, or can block a medication’s efficacy altogether. And it can reduce absorption of the vitamins and minerals you want to hold on to.

5 Healthy Smoothie Bowls You Can Make In Just 5 Minutes