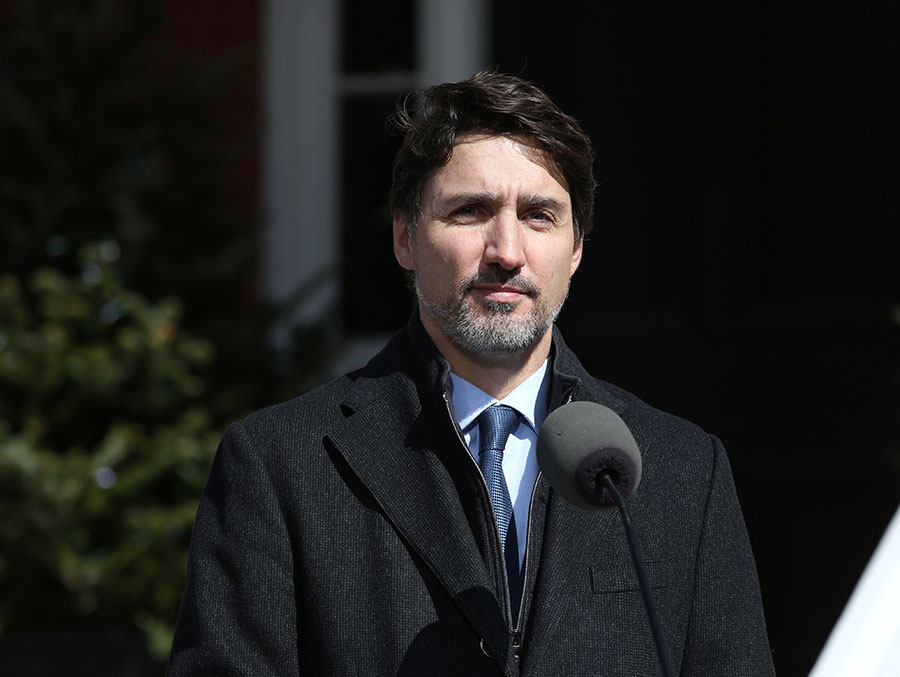 Canadian Prime Minister Justin Trudeau speaks during a news conference on the COVID-19 situation in Canada from his residence in Ottawa, Canada. Photo: Dave Chan/AFP/Getty Images

Prime Minister Justin Trudeau addressed the nation about the COVID-19 pandemic on Tuesday morning, announcing the closure of national parks and historic sites as well as a new fund to help Canadians abroad, including those attempting to return home.

Trudeau said Parks Canada is suspending visitor services at all national parks and historic sites immediately. In addition, Global Affairs has set up an emergency fund of up to $5,000 per person to help Canadians who need immediate financial assistance to return home and those who need assistance while awaiting return.

The Prime Minister praised Canada’s frontline health workers for “doing an incredible job. I know all Canadians are grateful,” as well as “retired health care workers who are putting up their hands and coming back to help Canadians.”

He offered a nod to Ontario’s response to the crisis, saying the province “is taking the right steps” in announcing a state of emergency earlier Tuesday. To that end, he urged Canadians across the country to continue to wash hands frequently, stay home and only go out if they have to, assuring that, “Things will get better.”

Trudeau spoke outside Rideau Cottage, where he remains in self-isolation after his wife, Sophie Grégoire Trudeau, tested positive for COVID-19. The Prime Minister admitted that he, like many others, would like to continue with daily life as normal, but that everyone has to stay home as much as possible. On the advice of Dr. Theresa Tam, Canada’s Chief Public Health Officer, the government still recommends the prohibition of gatherings of more than 50 people. When asked whether that number should be lowered in the wake of U.S. President Trump asking Americans to limit gatherings to 10 people or less, Trudeau stood by Dr. Tam’s recommendation, but added that Canadians should practice as much social distancing as possible.

Trudeau said he’ll make a major economic announcement tomorrow and an announcement about tax season later in the week. He said his government is also discussing emergency economic measures and examining the Emergencies Act to see if it’s necessary at this time. In closing, he called for coordination on all levels of government and between all parties, which he described as “vital.”

Ontario Declares a State of Emergency

Earlier Tuesday morning, Ontario Premier Doug Ford declared a state of emergency in the province, calling for the immediate closure of restaurants and bars (except for takeout and delivery) and “the prohibition of public events of over 50 people,” including at libraries, parades, daycares and public schools, theatres, concert locales, indoor community/recreation centres, places of worship and other venues in the wake of the COVID-19 outbreak.

“We’re facing an unprecedented time in our history,” he said at a Queen’s Park press conference. “This is a decision that was not made lightly.” The closures are in effect until March 31.

“Right now we have to do everything possible to slow the spread of COVID-19 in order to avoid overwhelming our health care system,” Ford added. “We must think about our children, our parents and our grandparents. We must think about the elderly, those with health issues and every other person across this province. All of these people have been on my heart and on my mind with every decision I have made during this crisis.”

Ford said the decisions were made after consulting Ontario’s Chief Medical Officer of Health, Dr. David Williams. That said, the premier also insisted that this does not equate to a provincial shutdown. That means that public transit, malls, some office buildings, grocery stores, construction sites and other places are open for now.

“The vast majority of businesses, including those most vital to day-to-day life, will not be affected by this order.”

Ford also announced $304 million in “surge funding” to help provide more hospital beds, medical equipment like ventilators and to expand testing and tracing origins of contact for those who contract the virus. He reiterated his dedication to supporting frontline and medical workers and noted that the spending was the first instalment in a “larger emergency relief package.”

On Tuesday, Ontario announced eight new confirmed cases of COVID-19, bringing the total number to around 185, as well as its first suspected COVID-19 death.

On Monday morning, in response to the threat of COVID-19, Prime Minister Justin Trudeau announced that Canada will close its borders to all travellers who are not Canadian citizens or permanent residents.

The prime minister noted that border closings will not apply to U.S. citizens, air crew, diplomats or their immediate family members. He also noted that the new border controls will not apply to trade and commerce with the U.S. in order to keep the flow of necessary goods into the country.

The new emergency travel restrictions are the latest of many measures the federal government is taking to stop the spread of the novel coronavirus. Canada now has 324 confirmed cases of COVID-19.

“I know that these measures are far-reaching. They are exceptional circumstances calling for exceptional measures,” Trudeau said at a press conference outside Rideau Cottage, where he is currently in self-isolation.

“It’s time for you to come home”

Trudeau extended a call to all Canadians who are outside the country – whether on vacation or on business – to return home as soon as possible. “Let me be clear: if you are abroad, it’s time for you to come home. If you have just arrived, you must self-isolate for 14 days,” Trudeau said.

Acknowledging the concern among Canadians who are currently abroad, Trudeau assured that support would be provided. “To help asymptomatic Canadians to return home, our government will set up a support program for Canadians who need to get on a plane,” Trudeau said. “Canadian travellers will be able to get financial assistance to help them with the costs of returning home or temporarily covering basic needs while they wait to come back to Canada.”

The prime minister also announced that travellers who display symptoms will not be permitted to board a flight to Canada and that air operators will be required to complete basic health assessments for every passenger, based on guidelines provided by the Public Health Agency.

Trudeau said that as of March 18, international flights will be permitted to land only at the international airports in Montreal, Toronto, Calgary and Vancouver to allow for enhanced screening.

When asked by reporters why it took so long to make the decision to close the borders, Trudeau said we have “now come to a point where the best advice from public health officials is that additional border measures on top of the social distancing measures that we are encouraging domestically is the right combination to move forward now.”

When asked why U.S. citizens were not barred from entering Canada, Deputy Prime Minister Chrystia Freeland, who also spoke at the press conference, was cryptic, offering that they needed to act with “real care, delicacy and precision” when it came to the Canada-U.S. border.

The Canada Border Services Agency (CBSA) has increased manpower and enhanced screening measures at airports and points of entry to Canada.

Starting today, all incoming travellers, regardless of their country of origin, will be asked if they are experiencing symptoms — such as difficulty breathing, coughing or fever — and will need to acknowledge that they are being asked to self-isolate for 14 days if they’re arriving from an international location.

However, the CBSA isn’t relying solely on travellers self-identifying as symptomatic. In addition to a questionnaire, CBSA officers will be on the lookout for visible signs of illness. Those they suspect of being ill will be referred to public health authorities for further evaluation regardless of how they answered the health screening questions.

Trudeau is urging that Canadians continue to do their part in stopping the spread of the virus.

“All Canadians, as much as possible, should stay home,” Trudeau said. “By staying home, you can not only protect your health and that of those around you but ensure that our health-care professionals and our health-care systems can focus on those who need their help.”

Earlier in the day, Ontario Premier Doug Ford announced his government would be introducing legislation that would ban employers from demanding sick notes for those in self-isolation or quarantine.

Will Warmer Weather Stop the Spread of Coronavirus?