On Florence Nightingale’s Birthday, Paying Homage to a Pioneer of Handwashing and Hygiene 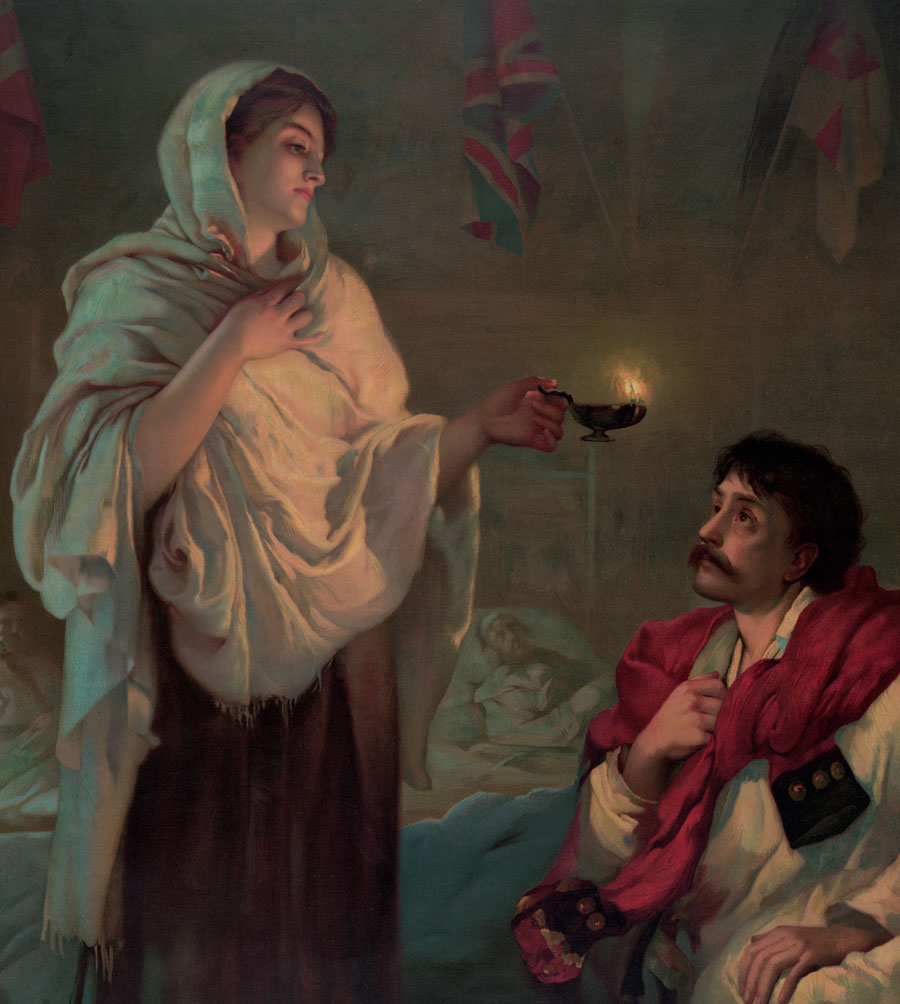 Florence Nightingale was known as The Lady With the Lamp because she would check on wounded soldiers at night carrying an oil lamp.This is a print from the painting Miss Nightingale at Scutari, 1854 by Henrietta Mae. Photo: VCG Wilson/Corbis via Getty Images

Florence Nightingale, who was born 200 years ago, is rightly famed for revolutionizing nursing. Her approach to caring for wounded soldiers and training nurses in the 19th century saved and improved countless lives. And her ideas on how to stay healthy still resonate today – as politicians give official guidance on how best to battle coronavirus.

For example, although Nightingale did not fully subscribe to the idea that many diseases are caused by specific micro-organisms known as germs until she was in her 60s, in the 1880s, she was well aware of the importance of handwashing. In her book Notes on Nursing (1860), she wrote that: ” Every nurse ought to be careful to wash her hands very frequently during the day. If her face, too, so much the better.”

During the Crimean War (1853-1856), Nightingale had implemented handwashing and other hygiene practices in British army hospitals. This was relatively new advice, first publicized by Hungarian doctor Ignaz Semmelweis in the 1840s, who had observed the dramatic difference it made to death rates on maternity wards.

Nightingale’s attention to international medical research and developments was just one factor behind her ability to make effective interventions in public health. Like many public health experts of her age, Nightingale considered the home to be a crucial site for disease-preventing interventions. This was the place where most people contracted and suffered from infectious diseases. (The same is true today: in Wuhan’s coronavirus outbreak, around 75 to 80 per cent of transmissions were reportedly in family clusters).

Nightingale’s book, Notes on Nursing, was more of a public health instruction book than a nursing manual. It advised ordinary people how to maintain healthy homes – particularly women, in accordance with the world view of the times. There was straightforward advice on everything from how to avoid excessive smoke from fireplaces (don’t let the fire get too low and don’t overwhelm it with coal) to the safest material with which to cover walls (oil paints, not wallpaper).

Nightingale strongly counselled that people open windows to maximize light and ventilation and displace “stagnant, musty and corrupt” air. And she advocated improving drainage to combat water-borne diseases like cholera and typhoid.

In her view, all domestic interiors must be kept clean. Dirty carpets and unclean furniture, she wrote with characteristic bluntness, “pollute the air just as much as if there were a dung heap in the basement.”

Notes on Nursing also called upon the “mistress” of every building to clean “every hole and corner” of her home regularly, for the sake of her family’s health. But Nightingale also recommended a more holistic approach to health. She encouraged soldiers to read, write and socialize during their convalescence so they would not sink into boredom and alcoholism.

During her youth, Nightingale’s father had introduced her to a leading practitioner of statistics, then a brand new academic field, and paid for her to have a mathematics tutor. During and after the Crimean War, Nightingale seized on statistics as a way of proving the effectiveness of different interventions.

She went on to produce her famous diagrams, which demonstrated the high proportion of soldiers’ deaths caused by disease as opposed to battle wounds, and became the first woman admitted to the London Statistical Society in 1858.

Thereafter, she designed questionnaires to obtain data on such questions as the sanitary condition of army stations in India, or the mortality rates of aboriginal populations in Australia. Her guiding principle was that a health problem could only be effectively tackled once its dimensions were reliably established.

In 1857, around a year after returning from the Crimean War, Nightingale suffered a severe collapse, now believed to have been caused by a flu-like infection called brucellosis. For much of her subsequent life, she was racked with chronic pain, often unable to walk or leave her bed.

Having been declared an invalid, she imposed a rule of seclusion on herself because of pain and tiredness rather than from fears of contagion – a form of self-isolation that extended to her closest family (though she still had servants and other visitors).

During her first years of working entirely from home, Nightingale’s productivity was extraordinary. As well as writing Notes on Nursing, she produced an influential 900-page report on the medical failings during the Crimean War and a book on hospital design.

This was in addition to setting up the Nightingale Training School for nurses at St Thomas’ hospital in London in 1860 and a midwifery training program at King’s College Hospital in 1861, plus advising on the design of a number of new hospitals.

Later in the 1860s, Nightingale proposed a reform of workhouse infirmaries to make them high quality taxpayer-funded hospitals; and also worked on sanitary and social reforms in India. All of this she accomplished without leaving her house (though government ministers sometimes came to her home for meetings).

Having said this, it is worth remembering that Nightingale’s was a privileged form of self-isolation. Her father’s fortune, derived from Derbyshire mining interests, meant she had no money worries.

She lived in a nice house in London with various assistants and servants to help, shop and cook for her and had no children to look after. Her entire waking time could be devoted to reading and writing. So while this is an appropriate time to recall and celebrate the huge contribution Nightingale made to modern nursing and public health care, we shouldn’t feel too badly if we don’t quite live up to her high standards of isolated productivity.

Richard Bates is a Postdoctoral Research Fellow in the Department of History at the University of Nottingham, U.K.

The Life and Times of Florence Nightingale