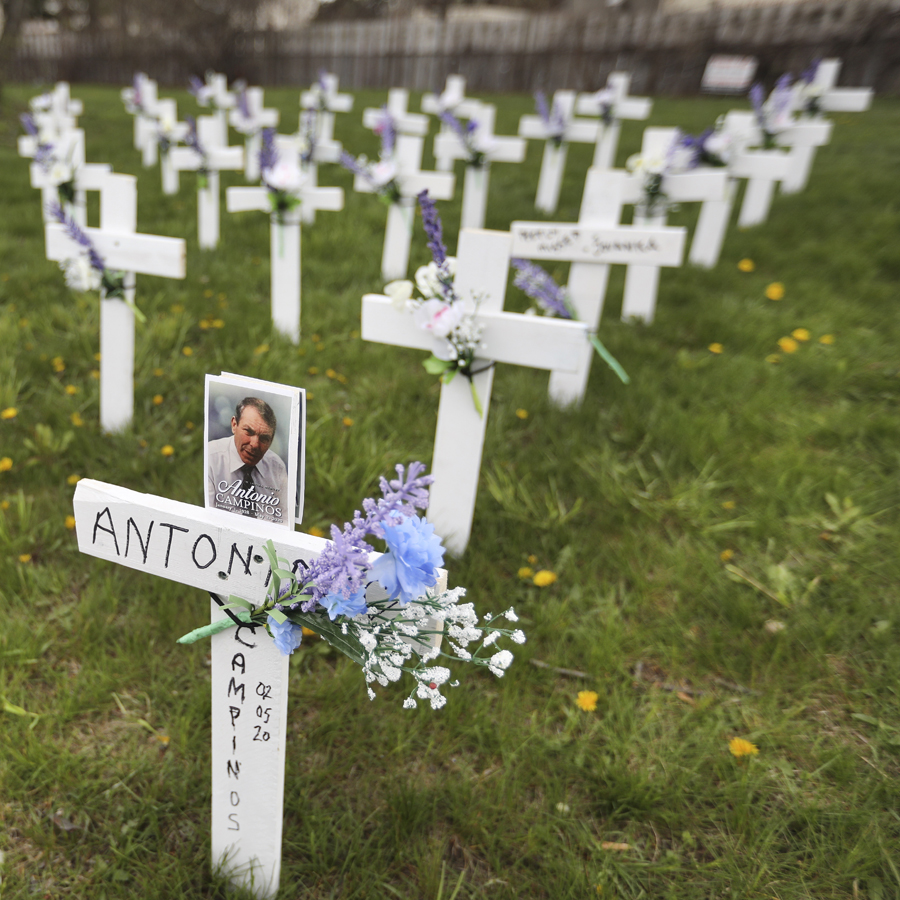 Some of the 50 crosses that populate the side lawn of the Camilla Care Community nursing home in Mississauga, Ont., to mark the 50 residents who died as a result of the COVID-19 outbreak. Photo: Richard Lautens/Toronto Star via Getty Images

A recent report by the Canadian Armed Forces describing terrible conditions in five Ontario nursing homes has prompted the province’s ombudsman to launch an investigation into the province’s handling of its COVID-19 response in long-term care.

“The Canadian Armed Forces report painted a stunning portrait of the situation in long-term care during this crisis,” said the province’s ombudsman Paul Dubé in a statement issued today.

“Our investigation will look at the systemic issues that led to it and will make constructive recommendations for corrective action,” he continued. “Determining the root causes of administrative dysfunction and recommending practical solutions is what we do.”

CARP’s Chief Policy Officer Marissa Lennox applauded the investigation, saying that “oversight of Ontario long-term care homes during COVID-19 has been poor.” She pointed specifically to recent revelations that the province was conducting nursing home inspections by phone, rather than in person. “We are glad to see the Ontario Ombudsman commit to investigating this issue, which indeed contributed to the many problems experienced in long-term care,” said Lennox.

Ontario’s latest COVID-19 figures paint a grim picture of how poorly the long-term care system performed during the pandemic. Besides failing to control the spread – there have been outbreaks in more than 300 facilities – 1,648 of the province’s 2,276 total number of deaths related to the disease have been attributed to residents of long-term care.

It’s inarguable that throughout the course of the pandemic, the disease has taken a severe toll on Ontario’s most vulnerable living in elder care institutions. This has prompted many family members to criticize the province’s response to the health crisis, saying many homes lacked trained staff, were operating without sufficient personal protective equipment and weren’t isolating infected seniors from the rest of the general population.

In fact, the outbreaks became so unmanageable at five long-term care facilities that the province resorted to calling on the federal government to send the army in to help out. It has since taken over management of all five of those homes.

Last week, the military on the ground at these five homes released a shocking report describing the horrible conditions they discovered when they arrived.

Among the more damning allegations in the Army’s report included:

Dubé noted that his investigation will focus on whether the oversight of long-term care by the Ministry of Health and the Ministry of Long-Term Care was “adequate to ensure the safety of residents and staff.”

The ombudsman said he will look at everything from complaint handling, inspections carried out by the Ministry of Long-Term Care, measures taken by the province to support long-term care homes during the pandemic, infection control as well as communication with residents, staff and the public.

He outlined that his office’s Special Ombudsman Response Team, which handles large-scale systemic investigations, will review the ministries’ standards and policies for long-term care homes during the pandemic, as well as the adequacy of oversight mechanisms to ensure compliance.

Although the ombudsman didn’t set a timeline for his investigation, it’s likely it will run parallel to the province’s own commission, which officials said could begin as early as July.

Dr. Merrillee Fullerton, minister of long-term care, announced in mid-May that the province will undertake a commission to “review the long-term care system to get a better understanding of the impacts and responses to the COVID-19 outbreak.”

Ford: “We need to get this fixed”

At his daily media briefing today, Ford said he welcomed the ombudsman’s report saying, “I need answers. We need to get this fixed.”

The Ford government has been under fire for its failure to protect long-term care residents from the deadly effects of the pandemic.

Immediately after the Army’s report emerged, Premier Ford promised to “spare no expense” to fix long-term care. But a recent statement issued by SEIU Healthcare, a union that represents 60,000 health-care and community service workers in Ontario, blamed the government for increasing staff-to-resident ratios, capping the wages of personal support workers and limiting inspections in long-term care homes.

“The system we inherited was totally broken,” Ford argued last week, defending the province’s role in light of Army’s report. “But we’re going to fix it,” he said, adding that “I’ll spare no expense until we fix the system. I’m going to be laser-focused on this.”

“We have to do a deep, deep dive into all the homes,” promised Ford. “I don’t care what it takes.”