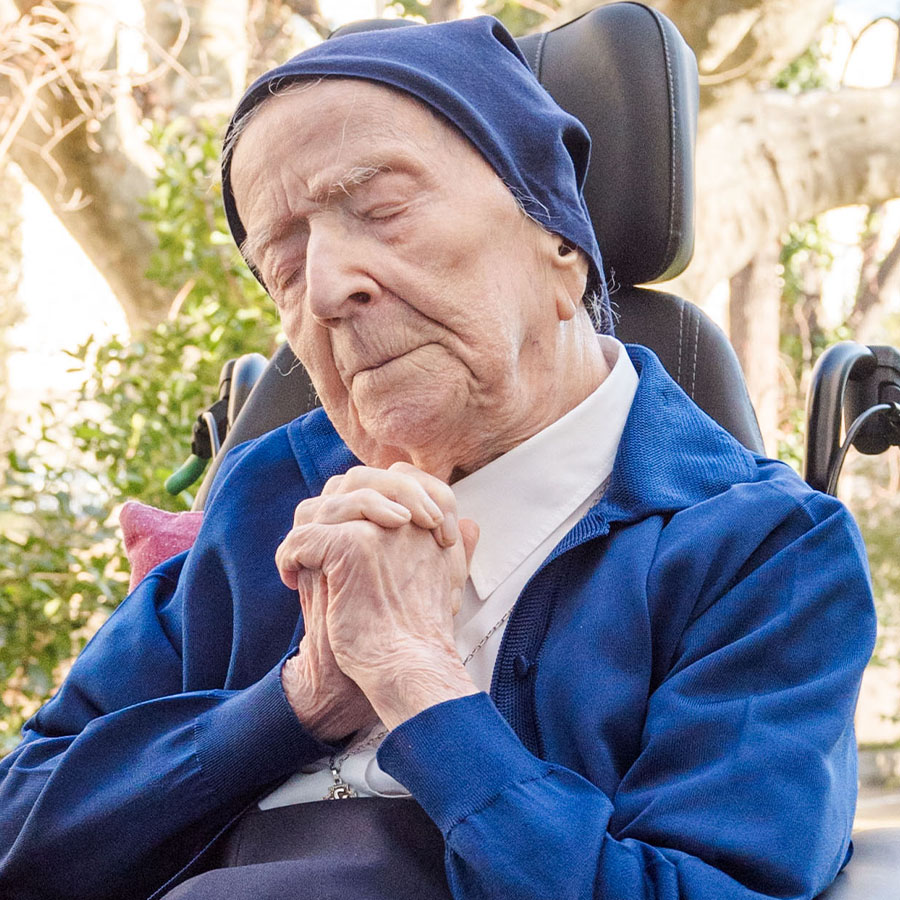 Sister André sits in prayer at her retirement home, Ehpad Sainte-Catherine Labouré, in Toulon, southern France on February 10. The French nun, who is the oldest person in Europe and second-oldest in the world, beat COVID-19 just days before turning 117 years old. Photo: Florian Escoffier / AbacaPress.com via Getty Images

After living through both world wars and the 1918 flu pandemic, Sister André wasn’t about to let a COVID-19 diagnosis spoil her 117th birthday on Thursday (Feb. 11).

The retired French nun, who holds the title as the oldest living European according to Gerontology Research Group, spent the weeks leading up to her birthday in isolation in her room at the Sainte Catherine Labouré retirement home in the southern French city of Toulon before she was declared fully recovered on Tuesday.

“I didn’t even realize I had it,” Sister André, told the Var-Matin newspaper about her experience with COVID-19.

According to the retirement home’s spokesperson David Tavella, the supercentenarian, who’s also the second oldest person in the world, was asymptomatic throughout her time with the virus and showed little worry over her diagnosis. Instead, she was more concerned about the inconvenience it might cause.

“She wanted to know, for example, if the meal and bed times were going to change,” Tavella said. “She showed no fear of the illness. In fact, she was more worried about the other residents.”

Sister André told Le Parisien she spent most of her time in isolation praying and longing for the days when she could have meals with friends and go on walks in the garden again.

When asked about her lack of fear in the wake of her diagnosis, she explained she wasn’t afraid of death.

“I’m happy to be with you, but I would wish to be somewhere else – to join my big brother, and my grandfather and my grandmother,” she said, according to a Reuters translation of an interview with France’s BFM Television.

Sister André was born Lucile Randon on Feb. 11, 1904, in Alès, a town in the Occitanie region of southern France. She was raised in a nonreligious Protestant family and worked at a young age as a governess in Marseille and tutor in Paris before converting to Catholicism at the age of 19. At 25, she began working at a hospital and took care of elderly people and orphaned children for 28 years. In 1944, she joined the Daughters of Charity to become a nun at the age of 40, taking on the name Sister André in honour of her deceased brother.

She is blind and confined to a wheelchair, but in her retirement home, where she’s lived since 2009, she’s known for her sociable personality and love of music.

Travella says she’s looking forward to celebrating her 117th birthday with a small group to minimize any further risk.

“She has been very lucky,” Tavella says.

Though, more importantly, Sister André has since reportedly made her return to mass.