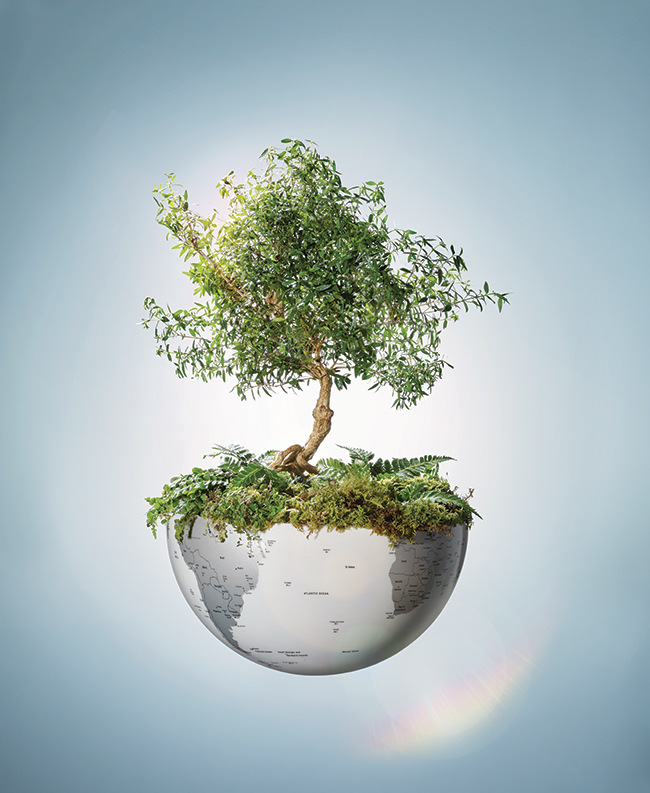 As we look to put a difficult year behind us, we take a look at the lessons we can carry forward from navigating a global pandemic. Photo: Yasu + Junko/Trunk Archive

The more things change, the more they should not stay the same. Mike Crisolago examines lessons from a pandemic.

People coping with the COVID-19 outbreak today don’t have much in common with the citizens of Athens in 430 BC – the year of the first recorded pandemic in history. Athenians communicated via stylus rather than smartphone, called upon Zeus rather than Zoom and, fortunately, never had to put up with an anti-mask rally.

Pandemics, however, can serve as a spark for innovation. During the Black Death in the 14th century, Venetians began the practice of quarantine, while in the 19th century, as cholera ravaged England, Dr. John Snow helped trace the outbreak to a contaminated well and laid the foundation for public health awareness of clean drinking water (and his own reputation as a pioneer of epidemiology).

Of course, sometimes the wind blows the other way. Historian Thucydides recorded how the Athenians flouted laws and “venture[d] on acts of self-indulgence” during the plague.

Two millennia later, we can do better. Once the cloud of COVID-19 lifts, humanity has an opportunity to eschew a return to our old ways and use the lessons learned from the pandemic to foster a stronger, healthier new normal.

By now, it’s obvious why, as kids, our parents harped on us to wash our hands. The importance of hygiene to halt the spread of COVID-19 is key, and it’s a lesson that’s sure to stick in the aftermath. But public health encompasses all facets of protecting populations, and disease prevention extends to agricultural practices, housing, the environment, sanitation and sustainable design.

“When public health is doing its job, anticipating threats to health and keeping environments and societal institutions safe so that people are safe, its successes are invisible so it’s easy to ignore them,” says Kitty Corbett, a medical anthropologist, professor emerita at the University of Waterloo’s School of Public Health and Health Systems and a Fulbright Scholar who has worked in public health around the world. “But a crisis like this brings them into high relief.”

That invisibility tends to make public health systems susceptible to government cutbacks, like U.S. President Donald Trump disbanding the pandemic unit of the National Security Council in 2018 or Ontario Premier Doug Ford’s announced cuts to, and a coming overhaul of, public health programs – some of which he walked back following public outcry. In fact, a July 2020 report from the Financial Accountability Office of Ontario showed the Ford government left $466 million of the province’s health sector budget on the table in 2019 – money that could have gone to funding hospitals, long-term care facilities and other public health initiatives and offices ahead of the COVID-19 pandemic.

In a post-pandemic world, Corbett hopes governments give public health a seat at policy-making tables while ensuring respected scientists are at the forefront in times of crisis. She believes daily COVID-19 health updates have made the public “more scientifically and medically aware” and, to that end, she suggests courses on public health education from kindergarten through Grade 12.

And of course, there’s the hope that the kindness and camaraderie exhibited around the world during the pandemic is carried forward, not to mention the “almost sudden rebalance of who is admired in society.” We know now, of course, that not all heroes wear capes. Some wear medical scrubs, grocery store aprons and postal-service uniforms.

“I think what I anticipate is a broad cultural shift,” Corbett says. “It’s more likely as we face the next phases of the pandemic, as we face new pandemics that may emerge, as we address issues such as climate change, society’s going to be more receptive to the side of precaution and preparedness.”

Clear waters and fish in Venetian canals. Double-digit drops in air pollution over New York and parts of China. Wild animals returning to quarantined cities. The first months of the COVID-19 pandemic offered a glimpse into how the Earth would respond if humans disappeared.

Unfortunately, however, it didn’t last. A September 2020 report from the World Meteorological Organization – a UN agency – noted that climate change hasn’t slowed during the COVID crisis. As Petteri Taalas, the organization’s secretary-general, noted in the report, greenhouse gases reached “record highs” this year, while parts of Siberia experienced a heat wave for the first six months of the year.

“And now,” he continues, “2016–2020 is set to be the warmest five-year period on record. This report shows that whilst many aspects of our lives have been disrupted in 2020, climate change has continued unabated.”

Biologist Tim Gray, executive director of the Canadian advocacy organization Environmental Defence, notes that, in the new normal, we need to heed the warnings scientists have been issuing for years about climate change. Keeping the environment on a healthy track includes curbing habitat destruction, which forces animals into closer contact with humans and increases the chances of disease transmission, as well as regulating wet markets like those seen in parts of China, which allow viral transfers between animals that would never otherwise meet in the wild. Even the melting of permafrost in the north and south of our planet – a result of climate change – raises the possibility of historic pathogens becoming unfrozen and evolving.

“Dismantling of the ecological system that has been in place since humans evolved is bound to have massive consequences,” Gray adds.

Gray also believes the pandemic has shown us new ways to structure our day-to-day habits. “Maybe we need to be thinking about how we organize our cities and our work lives,” he says, offering examples such as allowing employees to work remotely to curb commuting. “Because, of course, that has huge benefits from a number of perspectives – everything from traffic congestion to fossil fuel burning to [time] spent in vehicles.”

Governments will ultimately play a key role in climate change. He warns against a demand from sectors like oil and coal companies for government reinvestment as well as bailouts to “recreate the old economy.

“We really need to be keeping our eye on the ball and see where our governments are going and whether they’re learning from this situation or whether they’re just going to recreate mistakes [of] the past,” he says.

But, Gray notes, “there’s also something to be learned about the role of governments in acting quickly and decisively to address a crisis,” as many did with COVID-19. As we emerge from the COVID pandemic, we need to ensure “that a similar level of co-operative and comprehensive action is taken to invest in the areas that have put us on good footing to address the climate crisis.”

And when you think of how fast governments invested in ways to protect the public from and teach them about COVID-19, it’s not difficult to imagine them putting that same zeal behind everything from investing in renewable energy to greater education and awareness about the effects of climate change and how individuals can do their part to help curb it.

It’s no secret that traumatic events lead to increased demand for mental health services, and experts are warning COVID-19 could bring a surge of pandemic-related cases of post-traumatic stress responses, anxiety and other afflictions.

Dillon Browne, an assistant professor of psychology at the University of Waterloo, says front-line health-care workers and relatives of pandemic victims will be more likely to suffer from post-traumatic stress responses, while the general population could experience increases in generalized anxiety disorder, depression or even agoraphobia.

However, he wonders if elected officials and policy makers are “going to rise to the occasion and implement the sorts of social supports that we need to address a shift in society that we know is coming?”

In Browne’s opinion, that includes “universal coverage for mental health services for everyone across the lifespan … we want children, families, older persons to [have] access in a timely fashion in a way that would have complete coverage.”

He also hopes that the stress of isolation and social distancing “becomes an exercise in perspective-taking” and helps people relate to those with mental illnesses. Browne points to the Bell Let’s Talk campaign and discussions about suicide on university campuses as examples of how “mental health is more a part of our vernacular and, as a result, I think people are really stepping up and doing the compassionate thing.”

It’s also important to remember that “different people have different levels of susceptibility to threat and stress and that all people have the capacity to do well.”

People tend to develop “a kind of psychological orientation toward hardiness or resilience” when they have good social supports, access to mental health care, systems of belief, etc. Think about author Margaret Atwood, who wrote a March opinion piece in the Globe and Mail, where the 81-year-old recalled growing up in the ’40s amid quarantines for diseases like scarlet fever, whooping cough and diphtheria. For her generation, she explained, the COVID-19 pandemic is a familiar nightmare: “We’ve been here before or, if not here, somewhere eerily like it.”

Empathy is a common goal for the new normal, and the pandemic provides a window into the reality many seniors face every day.

The 2016 Canadian census revealed that nearly 25 per cent of Canadians over 65 live alone. Meanwhile, studies, like those published in a 2019 article by the U.S. National Institute on Aging, have demonstrated that isolation and loneliness can lead to increased risk of everything from heart disease to Alzheimer’s and other forms of cognitive decline. And the COVID-19 pandemic emphasized how isolated some seniors are, while quarantines and social distancing offered the rest of us a taste of it.

“It’s making everybody slow down, spend more time with family, get more introspective, appreciate things more,” says Lisa Levin, CEO of AdvantAge Ontario, an advocacy organization that supports not-for-profit seniors care and housing institutions. “And so I think it will create more empathy among people to think of those who are lonely and isolated in the community.”

Levin notes an increase in technology use among seniors in many long-term care facilities, including FaceTime and Skype on iPads provided by the homes to allow residents to communicate with loved ones during the pandemic – a trend she expects to continue post-COVID-19.

Another hope for the new normal is to bridge generational divides, as seen on social media early on in the pandemic, with ageist memes like “OK boomer” and “boomer remover” – which celebrated older people’s susceptibility to COVID-19. They were countered by young people reaching out to seniors, from children writing cards to nursing-home residents to youth playing front-porch concerts for older neighbours. Levin, meanwhile, pointed to the group of 3,700 new nursing students who came forward to work in Ontario long-term care homes that had or might have had cases of COVID-19.

“So this is a very responsible generation, and it’s not good to do stereotypes,” she adds. “When you have life or death situations, there is no time for petty. It’s like, let’s just work together and figure it out.”

A version of this article appeared in the Jan/Feb 2021 issue with the headline “Brave New World,” p. 96.

7 Tips for Better Sleep During the Pandemic