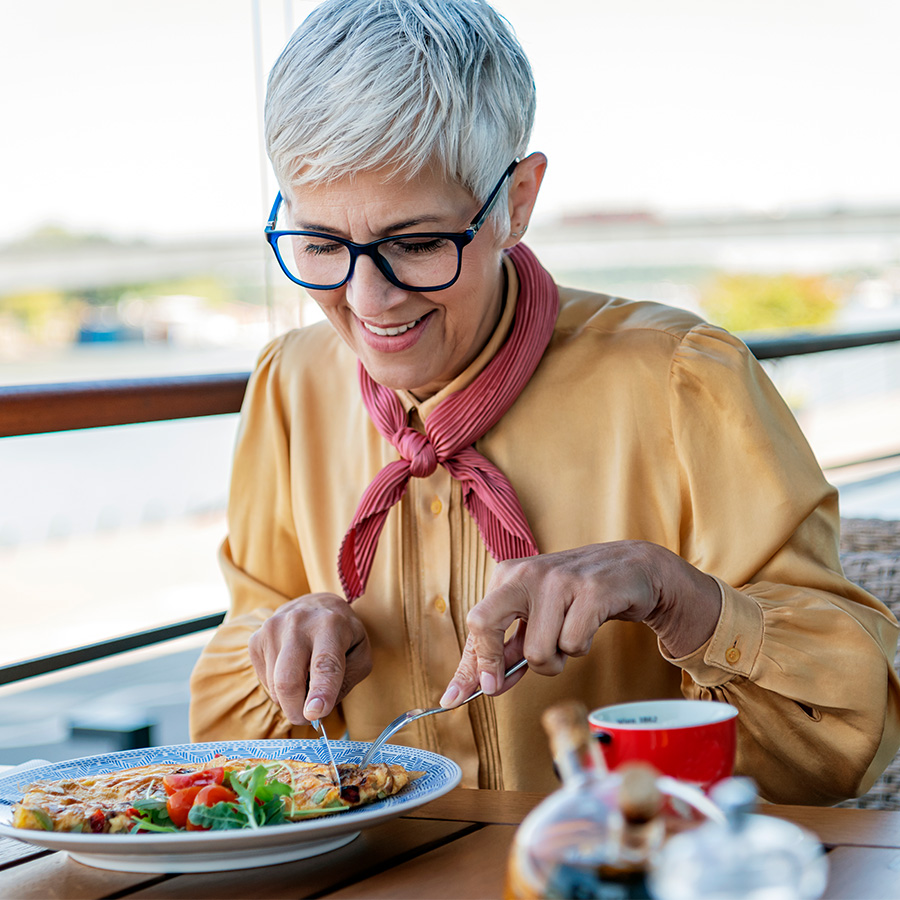 Here's yet another reason to adopt a plant-based diet: it may reduce the risk of death in post-menopausal women. Photo: GettyImages/ RealPeopleGroup

What if there were a simple diet fix for post-menopausal women that is proven to lower the risk of dementia-related death?

On the other hand, researchers found that eating more processed red meat compared to other proteins was associated with a 20 per cent higher risk of dying from dementia.

Most notable from the findings, substituting nuts for red meat, eggs or dairy products was associated with a significantly lower risk of death from all causes.

In short, if the worst breakfast you can eat includes bacon and sausage, the best breakfast may be almond butter (one tbsp has 7 grams of protein) on toast, while a boiled egg may be somewhere in between.

Eat nuts, not bacon or salami.

The study, published in the Journal of the American Heart Association, “is solid, with a large data base over a prolonged time,” says Dr. Carol Greenwood, professor of nutrition science at the University of Toronto and senior scientist at Baycrest Centre.

“It adds to the evidence that a high-quality diet is associated with a lower risk of disease and death,” she says, adding. “It also seems to be associated with slowing down cognitive loss as we age.”

Greenwood says that research in recent decades has shown that, contrary to what was once believed, “over time the brain seems to be sensitive to being refreshed like other tissues are.”

That suggests we should be “much more proactive in terms of protecting the brain,” she says.

The 68-year-old scientist who specializes in aging and nutrition says that research from this Women’s Health Initiative study, involving 100,000 post-menopausal women aged 50 to 79, to identify the source of protein that can lower risks — plant proteins, especially nuts — is “somewhat of a new twist.”

The problem is that while nuts may be an excellent form of protein and nutrition for the brain, they’re high in fat. And being overweight or obese increases the risk for poor health, disease and mortality.

It’s important to remember, says Greenwood, that “a serving of nuts is not very large. It’s 16 or 17 nuts. But they are a good, healthy portable snack to take with you instead of a chocolate bar.’’

Dr. Heather Keller, professor and research chair in nutrition and aging at the University of Waterloo, notes that while nuts and plant proteins are best, there’s still a place in the diet of older women for such unprocessed animal protein as lean red meat, poultry and low-fat dairy products.

“Protein supports our muscles and prevents frailty,” she explains. “One large dimension of aging is loss of muscle and loss of function. While exercise is the best way to keep muscle, enough protein has to be consumed for that protein to be laid into the muscle.”

The rule of thumb for protein consumption, says Keller, is one gram of protein per kg of body weight — ideally spread across the day.

“Current dietary guidelines mainly focus on the total amount of protein, and our findings show that there may be different health influences associated with different types of protein foods.”

Plant-Based Diet: Please Your Palate With These Warming Soup Recipes