Tough Love: Can Taking a Break Help Mend a Volatile Relationship With Your Adult Child? 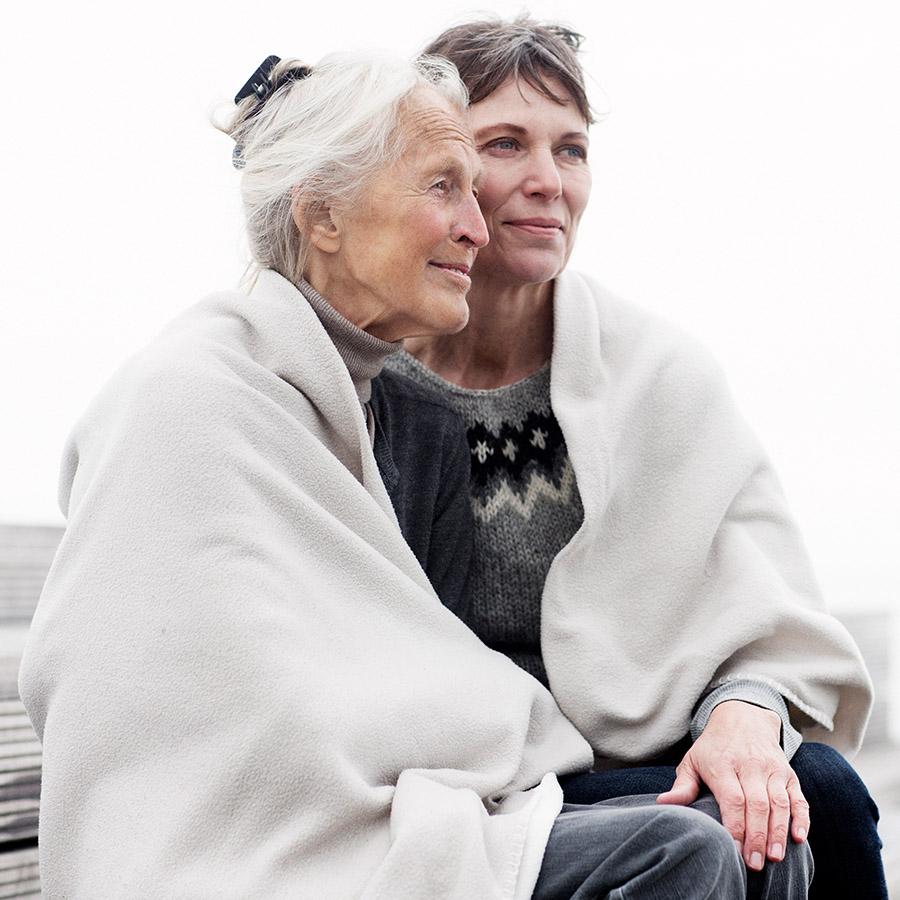 After mutually agreeing to a little time apart from her adult daughter, journalist Gabrielle Bauer looks into how a break can help heal a broken relationship. Photo: Solskin/GettyImages

As parents, unconditional care for our children comes with the territory. Yet, as Gabrielle Bauer discovered, sometimes the kindest thing to do for a relationship with an adult child is to give it a break

“Those are just words. You could have done better.”

“I can’t turn back the clock. What can I do right now?”

“Nothing. Maybe there’s nothing you can do.”

On and on we go, unable to get off this black merry-go-round. My daughter is 24 years old, and she hates me. She also loves me, fiercely. She loves me but she won’t — or can’t — forgive me for dumping my anxieties on her when she was growing up. Like that day at her elementary school, when I burst into tears in front of the mean girls who were snubbing her. Or the time I freaked out when her civics grade dropped from 90 to 72 within a week. Stuff like that.

When I hang up the phone this time, I tell my husband I can’t keep doing this. Tara is my firstborn child, and I love her stupidly but I need a break. The next day Tara texts me to suggest we stop talking for a while. We’re on the same page, then. We decide on a month of no contact — no visits, phone calls, video chats, emails or texts — to start with. She’ll miss Thanksgiving and her brother’s birthday, but we agree it’s for the best.

Life is supposed to get easier when your children become adults. You can do grown-up things with them, like talking politics over cocktails or getting side-by-side spa treatments. You can take holidays together and actually enjoy them. Gone are the muttered monosyllables, the slammed doors, the rolled eyes.

Except when they aren’t.

Relationships with our adult children can be close and rewarding but also tense and frustrating — or toxic to the point of no return. While not the norm, deep freezes between parents and grown children are by no means rare: in a 2015 multi-centre U.S. survey called Estrangement Between Mothers and Adult Children published in the Journal of Marriage and Family involving more than 2,000 mother-adult child relationships within 560 families, about 12 per cent reported estrangement from one or more of their children.

Could it happen to me? Tara herself has admitted that social media offers a lot of encouragement to sever family ties. “Every time you mention a problem with a parent, someone pops into the discussion and suggests you go no-contact,” she told me once. “There’s a lot of permission for this sort of thing.” By taking a deliberate step back from her, I hope to course correct our relationship before it reaches that point.

This “planned pause” strategy gets the thumbs up from Dianne Gilmour, a Vancouver-based counsellor who specializes in relationships, as long as both parties spell out details such as the length of the pause and the reasons behind it. “It really helps when they’re are mutually understood and agreed-upon boundaries,” she says. “That way, neither party is sitting back and wondering when communication is going to pick up again.”

More often than not, however, the push for a break comes from one side, forcing the other party to flex to an unwanted agenda. Lila*, 59, was running errands in her car when she got a call from her 33-year-old son, the father of a toddler approaching her second birthday. “He said that my grandmothering was intrusive, and he needed some time off from me,” says Lila, a medical writer living in rural Ontario. “I said, ‘Sure, let’s take a break and revisit this in the future’ and then pulled off the road so I could calm down and stop crying.”

As distraught as she was, Lila knew she could get through it, because she had done it before. Thirteen years earlier, her son had moved to Asia and cut off all contact with her, ignoring her emails and phone messages. After three long months, she got a four-page email from him, detailing all the pain she had caused him. You would have done the same thing if you had my childhood, she typed back immediately — and then deleted the sentence. Instead, she wrote: You’re absolutely right. This is your truth, and I’m sorry for what I did. Looking back, Lila sees that moment as “a fork in the road. I finally gave him what he needed, which was to be heard. I got my son back after that.”

This time around, Lila knew just what to do. “I had to let go of the postcard I had created in my mind, the smiling grandma watching over a cosy multigenerational family,” she says. “I needed to step back and let my son come to me.” Six weeks later he began sending her texts. Next, he asked her advice on his daughter’s bout of impetigo. “I’m learning that I have to  wait until he reaches out,” she says. “Now my son, daughter-in-law and I accept our roles in this new dynamic, and it’s working really well.”

As a writer, I reflexively turn to the written word to help me deal with life, and October 2020 — the month Tara and I stopped communicating – was no exception. As the days grew shorter and the leaves fell off the trees, the books piled up on my night table. I got a glimpse into Tara’s perspective when I read what Joshua Coleman, author of When Parents Hurt: Compassionate Strategies When You and Your Grown Child Don’t Get Along, had to say about young adult children: “It was their childhood, not yours; their experience, not yours; and now, in case it wasn’t perfectly clear, their adulthood.” I resolved to “keep your mouth shut and your door open,” as Jane Isay counsels in her book Walking on Eggshells. Her advice about giving advice had me wincing in self-recognition: “Don’t give it. They don’t like it. They don’t want it. They resent it.” I agreed with Allison Bottke, author of Setting Boundaries With Your Adult Children: Six Steps to Hope and Healing for Struggling Parents, who urged parents like me to“recognize the parts we play in the drama.”

What was my part? What Lila had told me about her son — he needed to be heard — was exactly what Tara had been telling me for, oh, 15 years or so. Whenever she risked sharing a problem with me, I jumped into fix mode. Did you try this? Did you try that? Anything I can do? What she desperately needed and had never gotten from me was a mother who could sit with her pain. Who could hear her words, rather than deflect them.

Gilmour has made mutual hearing a cornerstone of her practice. A healthy relationship requires that “each side feels heard, even if the other party doesn’t agree with what’s being said,” she explains. But how do you get there? “You break it down into workable pieces so it’s not a huge emotional blob. Situation by situation, memory by memory. Take 30 to 60 seconds to give your side. The other person doesn’t get to challenge what you said. She just listens – and then it’s her turn to talk.”

Of course, the “hearing cure” only works if both parties agree to the deal. Elizabeth Oakley, 54, tried hard to make it happen. After decades of clamouring for her 88-year-old mother’s attention, Oakley, who lives in Barrie, Ont., “wrote her a letter explaining why I felt so hurt, like her lack of emotional support when I got divorced and when I lost my job during the pandemic.” When the letter went unanswered, Oakley reached for the phone. “I spent a week calling her every day, trying to inspire a real conversation. In return I got criticism about my personal choices, parenting and even my housekeeping.” That’s when Oakley decided she was playing a game of solitaire – and chose to fold. “I didn’t make any formal announcement, just stopped contact,” says Oakley, who regards the rupture as “an indefinite break. If it helps us get back on track, great, but I’m not counting on it. It’s self-preservation at this point.”

Unlike Oakley, I knew exactly when Tara and I would connect again: Nov. 1. The second COVID-19 lockdown hadn’t kicked in yet, so we arranged to meet at an outdoor patio. Bloody Caesar in hand, Tara shared her big news: she and two friends had moved into a three-bedroom flat in Toronto’s Little Italy district – that morning. After vowing for three years to get out of her cramped studio apartment, she had finally done it. That she made her move during our month apart could not, it seemed to me, be a coincidence.

Tara suggested extending our hiatus through November. “I’m always aware of what you might think of my choices,” she confided. “It’s like you’re sitting on my shoulder all the time, and it feels healthy to have a break from that.” Agreeing to her request came easily: truth be told, the month off had taken a load off my shoulders as well. The reprieve from our blame-and-defend dance, from the clench in my gut in anticipation of our phone calls, had felt like a holiday and made it clear how unhealthy our relationship had become.

On the last day of November, I got a breathless call from Tara. “I’m going to Costa Rica for a couple of weeks, itinerary all planned out, Airbnbs all booked and – I know this is incredibly stupid – but I somehow managed to book a flight to the wrong San José, the one in California. I can’t afford the difference in airfare right now and, well, with Christmas around the corner …”

I came this close to saying it. This was my fork in the road, my chance to do better. “What a bummer,” I told her. “No problem with the early Christmas present.” We both laughed – and just like that, our two-month experiment was over.

So what happens next? What will stop the black merry-go-round from pulling us into its orbit again? According to Halifax therapist Timothy Walker, a lot will depend on me. “You have to let go of the idea that you can plan your child’s journey for her and, instead, honour the journey she’s on,” says Walker. With an adult son who lived in a van for three years, Walker speaks from experience. “Any time I tried to tell him what to do, he shut down,” he says. So can I never, ever offer advice to Tara again? “Only if she asks for it,” Walker says right away. “But your main task is to let go of expectations and accept what’s in front of you.”

How very Zen: the only way for Tara and I to come together is for me to let go. It’s why Tara has fought me so hard all this time, and I can’t blame her. It’s the fundamental task of parenthood and, for some of us, the most difficult thing in the world. But hey, I’ve got time.

And if Tara and I lose our way again, we now have a tool we can reach for. Retreat, reset, restart – repeat as often as needed. Works for me.

A version this article appeared in the April/May 2021 issue with the headline “Tough Love,” p. 81.

Zoomer vs. Zoomer: The Generational Showdown