Will COVID-19 Vaccination Enthusiasm Last? Lessons From Polio and H1N1 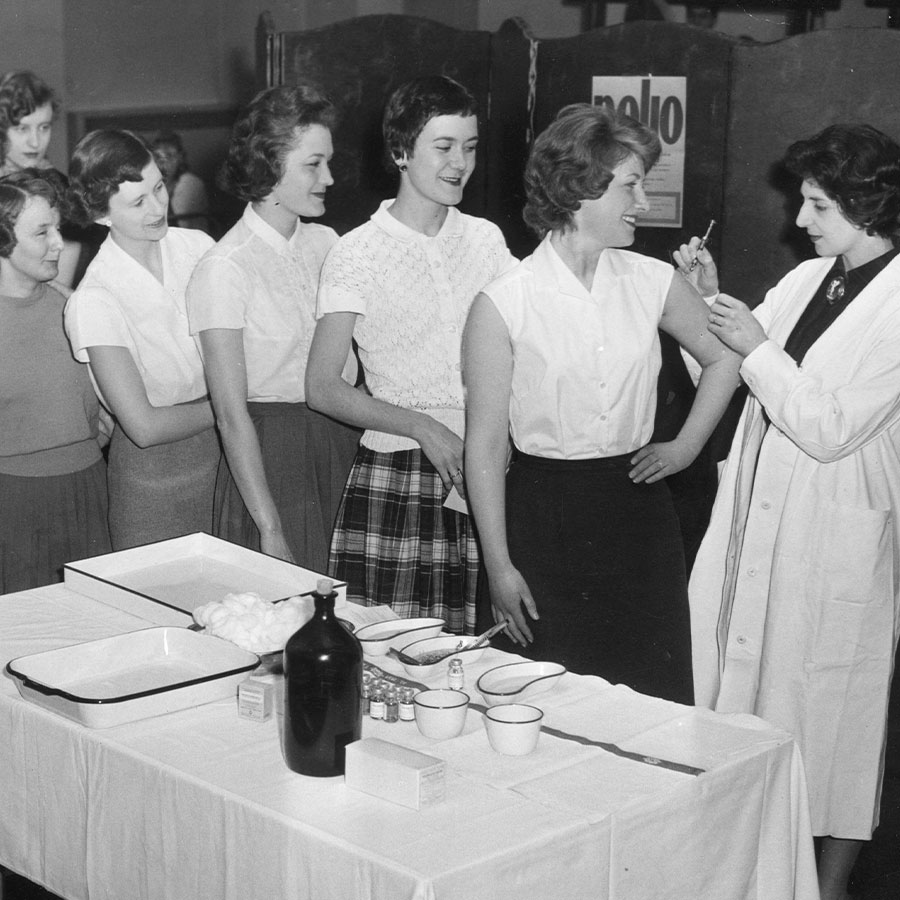 Junior members of staff at the Ministry of Health in London line up to receive their inoculation against polio, as part of a national drive to combat the disease. Photo: Keystone/Stringer/GettyImages

Canadian enthusiasm for COVID-19 vaccination is impressive. After repeated lockdowns, long separations from friends and family and economic losses, Canadians are lining up overnight at pop-up clinics and crashing websites with their eagerness to book appointments.

Canada is currently a global leader with over 75 per cent of the eligible population, as of June 25, having received their first dose.

Does this mean we can stop worrying about vaccine uptake? Experience from history suggests not. As historians Heather MacDougall and Laurence Monnais have argued, people do not get the recommended vaccines for a variety of reasons, including apathy. Another reason is misinformation, like the unfounded and discredited claim that the measles, mumps and rubella vaccine can cause autism.

Some are not convinced that the disease in question will impact them or their families. Others are deterred by the difficulty of accessing the vaccine. More than a few are scared of needles. We have seen all of these factors play out in past epidemics.

We examined the response to polio and the H1N1 vaccines in Canada. At the height of the epidemics, Canadians were keen to get vaccinated, but vaccine enthusiasm waned once the crisis had passed.

The Case of Polio

Parents were terrified by polio in the early decades of the 20th century. Usually striking in the otherwise carefree summer months, polio could leave children paralyzed. In some cases children were confined in iron lungs and in the very worst cases, death.

The first trial of the Salk polio vaccine took place in the United States in 1954, using a vaccine produced in Toronto’s Connaught Laboratories.

The vaccine proved highly effective. Other laboratories were licensed to product the vaccine, but one of them, the Cutter Laboratories, failed to properly de-activate the polio virus and 79 children contracted polio from the vaccine. The U.S. halted the vaccination program on May 7, 1955.

In Canada, a trial using the vaccine produced at the Connaught Laboratories continued. Health officials assured Canadians that the Connaught Laboratories product was safe and effective. By June 1956, 1.8 million Canadian children had been vaccinated. But this did not eradicate polio — there were significant epidemics in the late 1950s and early 1960s.

The Salk vaccine schedule required three separate doses, making it a challenge to complete the full course of vaccination.

Many adults believed that polio only impacted children and were reluctant to take the vaccine. Only 10 per cent of Canadian adults had received the required three doses of the Salk vaccine by June of 1959, compared to a rate of 90 per cent among school-aged children.

The year 1959 was one of the worst years for polio in Canada, with nearly 2,000 paralytic cases. In Montréal there were over 950 cases and 51 fatalities. Across Canada, more young adults died than children between the ages of five and 19, most of the cases occurring among those who had not been vaccinated.

The introduction of the oral polio vaccine (Sabin vaccine) in 1961 led to an uptick in polio vaccinations.

In just three months in 1962, over four million Canadians received the oral polio vaccine. Many adults who had resisted earlier appeals to get the Salk vaccine showed up to sip the tasteless Sabin vaccine, often served on a sugar cube. Newspapers raved that no needles were necessary. And by the 1970s, polio had all but disappeared in Canada.

When the Salk vaccine came out, parents were very keen to have their children vaccinated, but young adults were not convinced that they were at risk and did not get vaccinated. Only after additional epidemics showed that that they too could die or be paralyzed by polio did adults turn up to get vaccinated. The vaccination effort was further aided by tasty Sabin vaccine.

In spring of 2009, a novel H1N1 influenza virus began spreading in Mexico. The first cases were reported in Canada that April.

In June, the World Health Organization declared H1N1 to be a global pandemic. Like the flu of 1918-19, which killed as many as 50 million people around the world, the 2009 flu had a disproportionate impact on younger people.

But four days after vaccination clinics opened in Ontario, a previously healthy boy in Toronto died. The tragic news stirred fear among Ontarians, prompting thousands to rush to clinics. Many waited in line for hours, while others were turned away.

Vaccines became available to all Ontarians in November 2009, but by then, people’s fears had eased — it seemed that H1N1 was not as lethal as had originally been feared.

Ultimately, between 40 and 45 per cent of the Canadian population was vaccinated against H1N1.

Once again, vaccine enthusiasm was high in the middle of the crisis, but it diminished after the flu appeared to be less dangerous.

Polio and H1N1 reveal the complexities of vaccine enthusiasm. People rush to get vaccines when they perceive an immediate health risk to themselves or their family members. But without that fear, it is easier to delay or avoid getting vaccinated.

Many Canadians know someone who has gotten sick from COVID-19 and many have lost friends and family members to the disease. It’s no wonder we are eager to get vaccinated. But enthusiasm may wane as case counts fall.

If it proves that we need boosters, but case counts are low, will people make the same effort to get out to the vaccine clinics?

The biggest challenge may be ensuring the continuing uptake of vaccines once the initial crisis has passed. In addition to measures to combat vaccine misinformation, public health authorities need to ensure that vaccines are readily available and convenient to access.