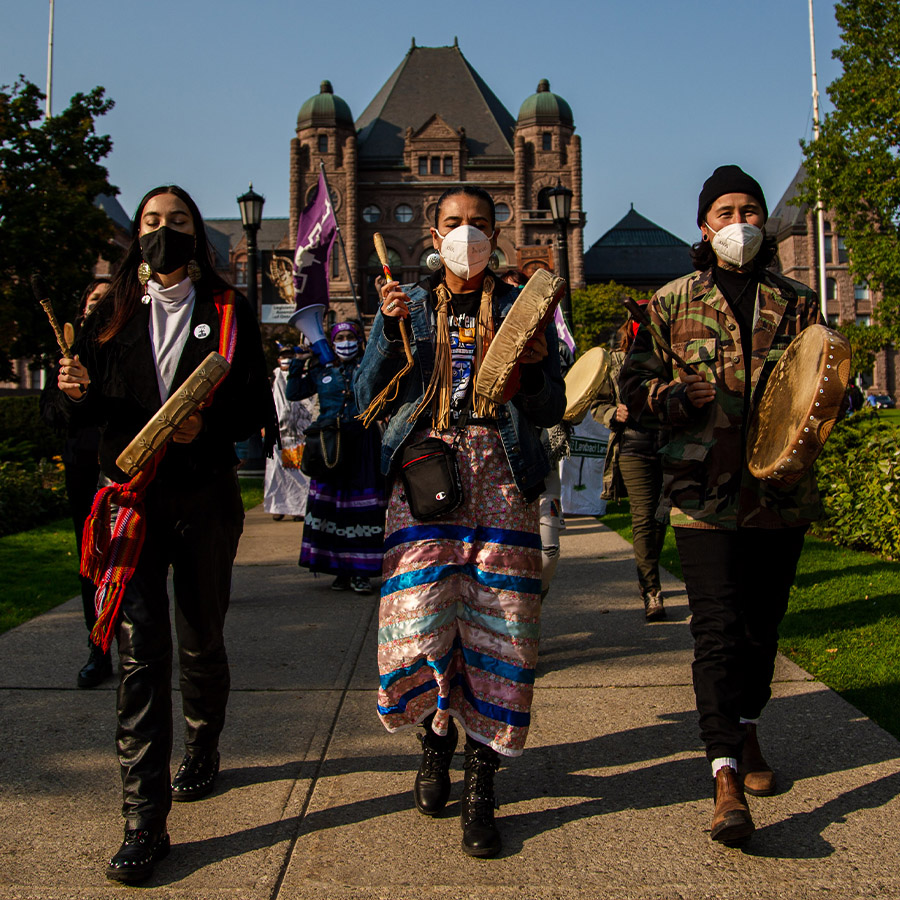 Racial microaggressions present in everyday interactions and behaviour directed toward Indigenous and other racialized people — such as the members of the Six Nations and allies seen above, marching near Queen’s Park in Toronto in 2020 — can have significant impacts on the mental health, physical health and social life of those who experience them. Photo: Nick Lachance / NurPhoto / Getty Images

“Don’t you go to school for free?”, “You don’t pay taxes!”, “Do you live in a teepee?” are all things Indigenous students have heard.

In some cases, there is widespread agreement on what racism is. For example, most people would agree that restricting a racial group’s right to vote in a federal election is racist. (Indigenous people were the last to gain full voting rights in Canada in 1960.)

What Are Racial Microaggressions?

As a mixed-race Haida woman, I’ve been routinely told I “don’t look Indigenous” or I’m “not like other Indigenous people” because I was born with my mother’s skin tone instead of my father’s. This is an example of a racial microaggression.

Microaggressions may seem small or “micro,” but as incessant forms of racism, they can have big impacts on mental health, physical health and social life.

One way of looking at the impact of racial microaggressions could be to look at daily hassles. Daily hassles are defined as “relatively minor, everyday problems such as commuting problems, family arguments or household repairs.”

The concept of daily hassles show that small things can have big impacts.

They’re also associated with a whole host of other negative outcomes like substance use, anxiety, stress and even suicidal thoughts in many racialized groups.

Microaggressions Aren’t Just Based on Race

A person can experience multiple types of microaggressions, due to the intersectionality of their identities.

For example, an Indigenous woman who identifies as bisexual might experience race, gender and sexual orientation-related microaggressions all in one day. Based on research on the impact of microaggressions and daily hassles, it is likely these combined experiences have negative impacts.

What to Do About Them?

However, focusing on the target’s response misplaces the burden. A more equitable approach would be to put the onus of addressing microaggressions onto the perpetrators of the microaggressions. But there is relatively little research on this.

One study found that white participants said they were less likely to engage in microaggressions after a day-long workshop on race, racism and racial microaggressions. The study provides hope to those who do this work, but more information is needed.

Microaggressions cause harm. More research needs to be done to understand how best to prevent them. Thinking about how words matter might be a good place to start.

Iloradanon Efimoff is a Ph.D. Candidate in Social and Personality Psychology at the University of Manitoba.