World AIDS Day: Inequality in Canada and Around the World Remains a Barrier to Eradicating the Disease 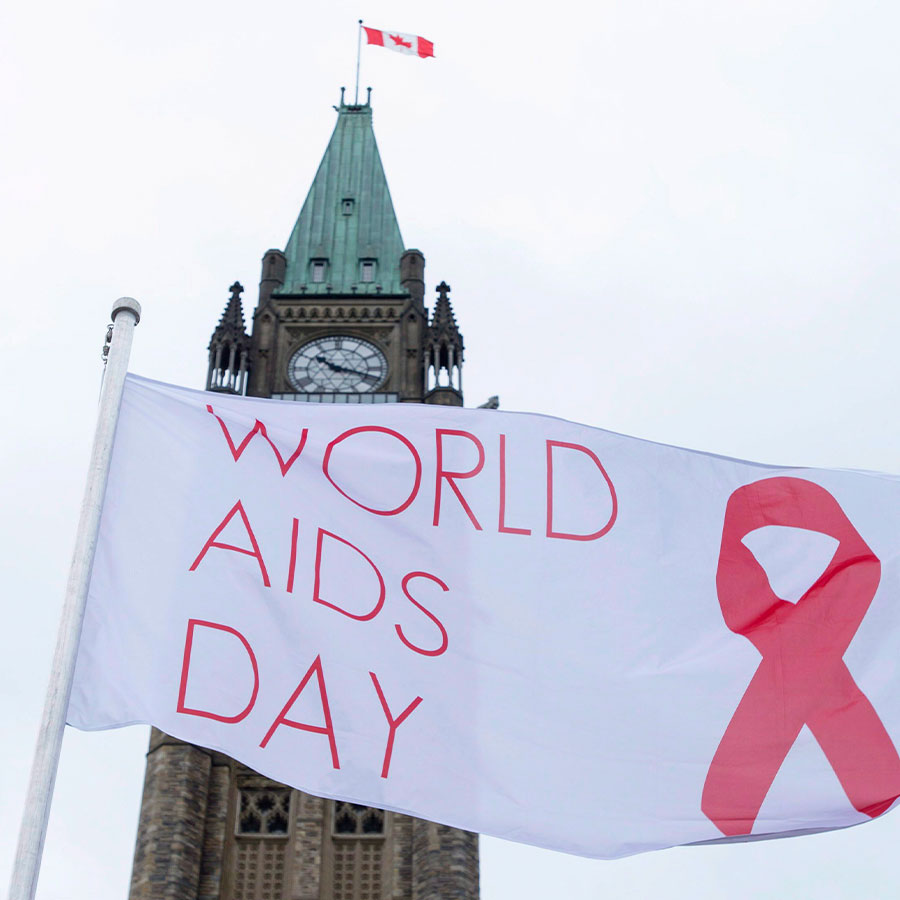 The World AIDS Day flag flies on Parliament Hill in Ottawa in 2016. Gary Lacasse, executive director of the Canadian AIDS Society, says there's a lack of equity across Canada for access to AIDS services and support. Photo: Justin Tang / The Canadian Press

The global theme for World Aids Day, Dec. 1, is simple and direct.

It’s been 40 years since the AIDS epidemic began and it’s less than 10 years until 2030, the target date set by UNAIDS — the United Nations program that declares World Aids Day — for eradicating the infectious viral disease.

That target, however, may be out of reach. UNAIDS warned days ago that the rate of decline in new HIV infections and AIDS-related deaths is slowing and that “the global HIV response is faltering.”

Around 1.5 million people became newly infected with HIV in 2020, and every 60 seconds someone died of an AIDS-related illness, according to UNAIDS. Without renewed momentum, hopes for reaching the 2030 target of ending AIDS could evaporate.

Although concerns about the global spread of AIDS often focus on younger people, of the 37.7 million people living with HIV at the end of 2019, UNAIDS estimates that about 4.2 million people were over the age of 50.

With the population aging and with the widespread use of antiretroviral therapy, that number will increase.

While many older people were infected with HIV decades ago, others acquired the disease in middle age or their senior years through unprotected sex or injection drug use. In 2018, more than a third of new HIV diagnoses in women in the U.S. were in those aged 45 or older, according to The Well Project.

“Some people have forgotten that it’s still an epidemic,” warns Alex Filiatrault, CEO of CANFAR, the Canadian Foundation for AIDS Research. “And as seniors, we have a responsibility. We were there in the ‘90s. We saw what happened and we can’t let it keep happening.”

Filiatrault will be leading the CANFAR delegation at the 2022 International AIDS Conference taking place July 29 to Aug. 2 in Montreal.

It will be “a huge platform for awareness and advocacy,” he says.

“We will be having a conversation about how we tackle HIV globally. We have the tools — education, access, care and prevention.”

The challenge is making those tools available everywhere in the world, ending inequality to eradicate AIDS.

In Canada and the U.S., more than 50 per cent of people living with HIV are now over the age of 50.

“Aging with HIV is not easy,” says Trevor Stratton, 56, a co-ordinator for the Canadian Aboriginal AIDS Network and CANFAR ambassador who was infected with HIV at the age of 25.

“It’s especially hard for people who are homeless, people with mental health issues, people living below the poverty line, newcomers to Canada.”

Eradicating HIV/AIDS globally requires the will to get the job done and, notably, the funds to make it happen. It requires ending the stigma that prevents people from getting tested, making antiretroviral drugs available at low or no cost, educating people everywhere about how HIV is transmitted (and how it’s not transmitted), informing people about preventing transmission with condoms, needle safety and PrEP drugs (pre-exposure prophylaxis).

PrEP reduces the risk of getting HIV from sex by about 99 per cent and from injection drug use by at least 74 per cent when taken as prescribed.

But it’s not just global inequality that’s a problem.

“There are still people dying of AIDS across Canada,” Gary Lacasse, executive director of the Canadian Aids Society, says. “Because our health system is a federation model, Ontario and British Columbia are different worlds. In B.C., antiretroviral drugs are completely free. In Quebec, there’s a co-pay upfront of $1,000, a huge barrier.”

He explains, “There’s no equity across Canada for access to services and support. And the federal government just wants to do prevention.”

Lacasse is particularly concerned about the increase in mother-to-infant HIV transmission. He says he hasn’t seen so many cases in a long time.

As such, even in Canada, World AIDS Day is a time to acknowledge that ending inequality is the imperative for ending HIV/AIDS.