New Year, New You: How to Find Inner Peace and Embrace Aging 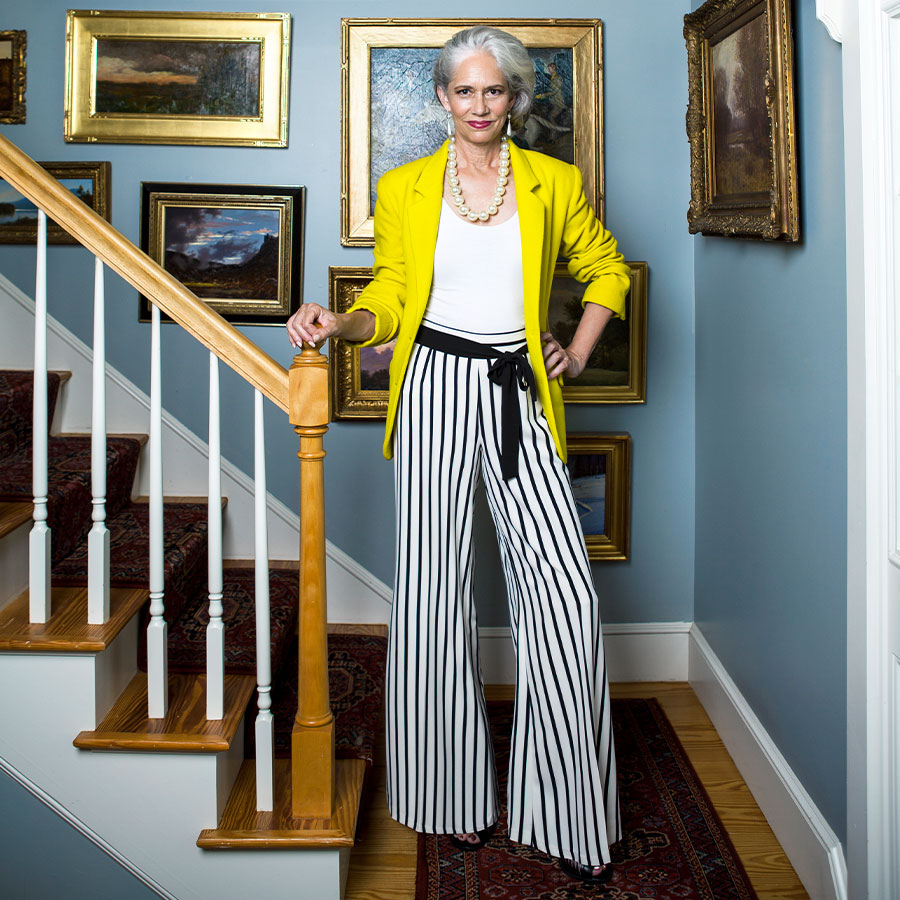 In honour of the New Year, New You, we spoke to some of our favourite lifestyle and health experts for strategies to find inner happiness and make peace with our bodies, minds and faces as we age. Photo: Photo: Andreas Kuehn/Getty Images

In her ’90s heyday, Linda Evangelista ruled the runways. Famed for her chameleon-like ability to transform her look, she was part of the elite supermodel squad known as The Trinity, along with Naomi Campbell and Christy Turlington. Evangelista was quite simply one of the most beautiful women in the world.

Most of her peers have defied the old norms around aging in the business — where models were retired like racehorses after they turned 30 — and still have careers in the public eye. But Evangelista, 56, who was born in St. Catharines, Ont., is a virtual recluse. This fall, she revealed she had been “brutally disfigured” by a fat-removal technique called CoolSculpting, and launched a US$50 million lawsuit against the company that owns Zeltiq Aesthetics when the fat cells that were supposed to be frozen away hardened into lumpy masses.

Horrible and tragic, yes. But if a great beauty like Evangelista was so unhappy with the effects of aging, what are the chances that mere mortals like us will accept the wrinkles and rolls that develop over time?

Evangelista sparked an important conversation about aging, and now we have a choice: Either we continue to look to seemingly ageless stars like Jennifer Lopez, 52 — and, for men, Rob Lowe, 57, — as beauty ideals, or we change the definition. We could start with the idea that happiness is what really shines through, and if your inner light is bright enough, no one will notice the wrinkles and bags and sags.

“I’ve worked on some of the most beautiful and famous faces in the world,” says Toronto-based celebrity makeup artist Simone Otis. “The truth is that those people often feel just as fat and ugly and stupid as we all do.” Pausing for emphasis, she says, “None of us are any of those things.” The solution is to change the conversation and swap out the lens we are looking through. “What makes someone beautiful, and I look at faces all day, every day,” she says, “is what is coming from inside. The outside is just a package.”

I would argue that Instagram is just as harmful for older women and men as it is for young people. Take the changing appearance of Madonna, 63, icon of a generation, who is now only ever seen in carefully selected photos that have been so heavily altered by her official tech team that she barely looks human. The tabloids occasionally catch the star in a pilfered iPhone shot, and all the carefully curated and airbrushed imagery crumbles like the portrait of Dorian Gray. Even Tom Cruise, 59, has been savaged for the difference between his onscreen chiseled visage and his off-duty “puffy” face, suggesting a penchant for fillers.

I spoke to Dr. Jacqueline Makerewich, a Toronto-based plastic surgeon who caught my attention because she believes in body positivity. “When you genuinely know and love yourself,” she says, “it is easier to focus on personal growth of any kind.”

We’ve made some progress from the days when men and women had a best-before date, and when middle age hit, they became invisible to society, not to mention sexually undesirable. We’ve made progress, but we live in a world where our perceived flaws — personal and physical — can be masked with upbeat posts and filters.

In honour of the New Year, New You, we spoke to some of our favourite lifestyle and health experts for strategies to find inner happiness and make peace with our bodies, minds and faces, plus a few hot tips on maximizing what you have.

Maximize What You Have

Makeup artist Otis is part of a team that has developed a new Canadian beauty brand, 19/99, which seeks models in a range of ages, sizes and backgrounds, particularly older women, to represent the brand.

“I didn’t set out to be a champion for this kind of cause,” she says. “But I realized very few makeup artists out there know how to put makeup on older women.” In her early 50s herself, Otis knows the battle.

The key is to find what you really like about your face. “Makeup builds confidence,” she says. “Be flexible, be open, try new colours. If a red lip isn’t for you, try a pink lip.” In general, less is more. “You can’t do the same runway look on a 60-year-old you would do on a 30-year-old. You have to modify it. At 19/99, we use sheer, buildable colours, so you can play around.” She says we forget that we can experiment as we age. “Go for it! The worst thing that can happen is you wipe it off, and you try again.”

If you have ever had your makeup professionally done, you know that makeup artists are natural psychologists who build your self-esteem as they enhance your face. “Words are powerful,” she says. “I hear how people in my chair talk about themselves. When we talk negatively about ourselves, we internalize that dialogue. We believe we are all those bad things.” When we tell ourselves good stories, she says, we start to believe them instead. A great start, she says, is to wake up and say aloud, “Today is going to be a good day.”

Joanne Blake is an image consultant, executive presence coach, speaker and trainer based in Edmonton. Her number one tip, to change how other people perceive you, is to change how you carry yourself. “Everything starts with good posture,” she says. “Standing, walking, sitting at the dining table — it all sends a message that you have healthy self-esteem, confidence, vibrance [and] take care of yourself.”

Social connections are also important. Three mornings a week, Blake meets with a group of women who used to run together, but now they walk. “We walk and talk and solve all the world’s problems, but it is really about the support we lend one another,” she says. “We’ve been together for six years now, and we know what is happening in each other’s lives, the good times and the bad.”

Human beings are hard-wired for connection. “Positivity isn’t one of our ground rules,” she says of the club, “but like attracts like” in both business and life. “If you are not happy with yourself, you are not going to transmit that energy to others.”

It also helps to do the emotional work necessary to embrace aging. “We need to shift our mindset and celebrate aging. As a society, we don’t do that so well.”

For her male clients, Blake says grooming becomes more important as they get older. “Personal grooming details go a long way to keeping men looking — and feeling — vibrant and energetic.” She says the unshaven look adopted by older men “just makes them look grizzled.” It works on George Clooney, but not everyone has a team to tend to their stubble.

Remember the early days of the pandemic, when we were all lounging around, unshowered, in the same old sloppy sweats? “That is depressing,” she says. “No wonder we were all depressed.”

Many of the tips she shares with clients are just common sense; things we may already know, but don’t practise. Older men and women should dress for success, and stay “fashionably current, but shy away from trendy.” Pull together three bulletproof outfits, and have them on standby for meetings or lunch with colleagues and friends, and you will feel more confident and secure. “Over-invest in quality accessories to draw attention to your face.”

Longevity researcher Dan Buettner is a professional explorer and American National Geographic Fellow who searches for the key to longevity around the world. The fourth of six books in his data-driven “Blue Zones” series explores why the oldest people are also the happiest. When Buettner published The Blue Zones of Happiness in 2017, he offered tips on how to emulate these quantifiably happier older people.

Looking at the cultural traditions of centenarians from small communities in Italy, California, Mexico, Costa Rica, Japan and Greece, he found they were too busy living to fret about aging. Their secret? “You need to ensure you have a balanced portfolio in terms of your daily emotions, purpose and life satisfaction,” he told Zoomer.

In addition to the longevity benefits of staying fit and eating a clean diet, mostly vegetables, his top tip for happiness is to socialize. “The happiest people spend five to six hours a day engaged in socialization and community,” he says. “By that, I mean meaningful conversation, not about sports or celebrity.”

The corollary? Stay offline! “The least happy people are online, substituting face-to-face connection with cheaper online interactions. We evolved as a social species; we should be indulging our genes. Hang out with friends and family.” He suggested a 45-minute limit on online engagement a day to keep your head straight and your happiness (and positive image of yourself) dialed up. An added bonus is that you keep yourself from comparing your own face, body and life to everyone else’s in that curated, alternative reality that lives only on our phones.

Do You, Your Way

If you want to get “work” done, and you think it will increase your self-assurance and feed your inner happiness, go for it. You do you!

Makerewich explains any good surgeon will have an extensive conversation with a client that is really a psychological screening to determine if your expectations meet the reality of what they can offer. Words like “make me more beautiful” or “can you fix this” are worrisome. To those people, she says, “You look beautiful just the way you are.”

When Makerewich looks at a face, she is drawn to facial expressions. “These are a combination of what a person feels on the inside and their outer anatomy. A perfectly smooth, wrinkle-free, expressionless face is not beautiful. It may look nice in a photo, but in reality it is lifeless.”

And she defines body positivity as harmony between body and mind. “I firmly believe that people have a right to their own bodies and should be able to love themselves in whatever way they personally deem best.”  For some people, that means learning to love their wrinkles and stretch marks, and for others, self-care might be a tummy tuck to get rid of loose skin.

“Women should be allowed the freedom to live in their bodies in whatever way makes them happy, without judgment.”

A version this article appeared in the Dec/Jan 2021 issue with the headline “Your Body, Your Self,” p. 52.

Fashionably Festive: 5 Looks We Love for the Holidays