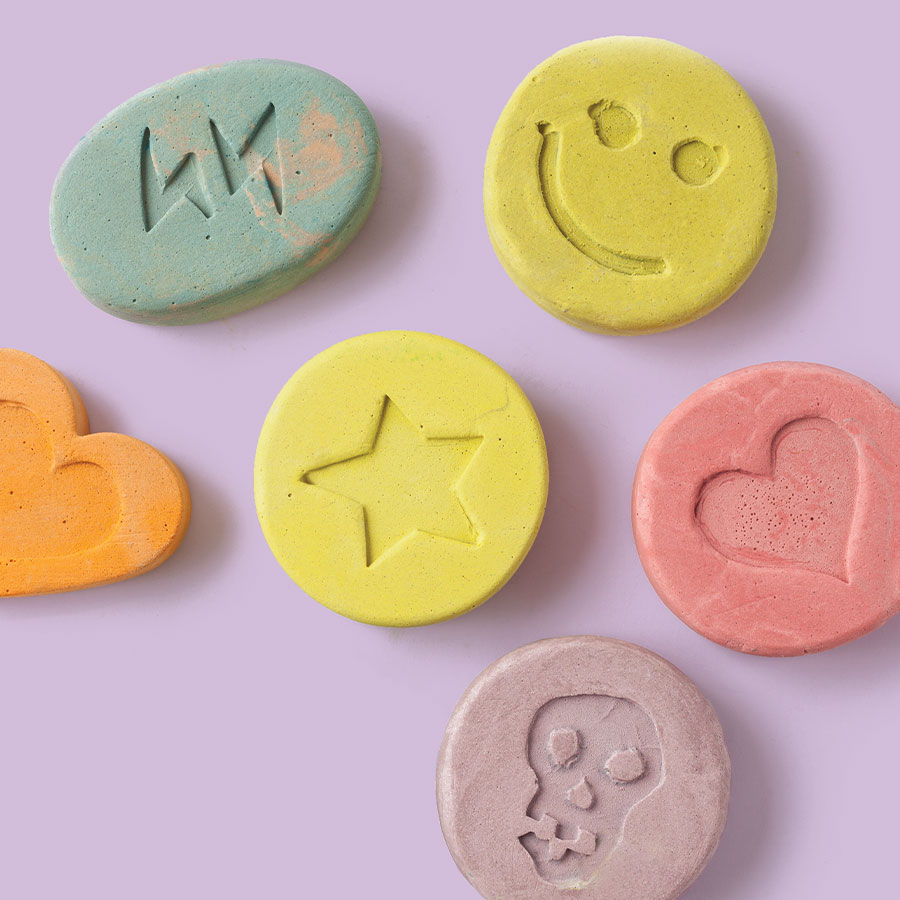 Multigenerational psychedelic drug experiences can provide connection and closeness but, as journalist Gabrielle Bauer found out, there is a wrong way to do it. Photo: Portokalis/Alamy

On Thanksgiving Day in 2019, my family of five sat down to a mid-afternoon meal of turkey, mashed potatoes, squash and a mixed-green salad. We skipped the pumpkin pie, though. Instead, my stepson Hugh, 32, placed a 100 mg tablet of MDMA (a.k.a. ecstasy or Molly) in front of me, my husband and our two children — both in their 20s — and himself. We swallowed in unison.

Our family style at the time was both close and contentious. We talked about lots of things, from the state of the world to the funny thing that happened at the supermarket, but resentments teemed like maggots under the friendly veneer. Every once in a while they broke through the surface — often during a meal — and left a bitter taste in our mouths. We had all experimented individually with so-called psychedelic drugs. At some point, the idea came up in conversation: Why not try them together? Maybe it would help us feel more connected. Maybe it would banish the maggots. We settled on Thanksgiving, hopeful the experience would leave us thankful.

An hour later, sitting cross-legged on the living-room floor with the people I loved most on earth, I felt thankfulness course through my body like a cascade of smiling emojis. My children’s faces bloomed in front of me: so perfect, so delicate, with big smiles of their own. “It’s all good,” one of them said, and the rest of us laughed. The air shimmered. “It’s all good” became our mantra. Every time someone said it, laughter bounced crazily off the walls of the room.

I was only 10 during the Summer of Love, too young to know how the world worked, but my mother had started to warn me. “Just say no.” Say no to what? “To drugs.” Why? “They’re bad.” Why are they bad? “Stop with the questions.” She also said that people who took LSD ended up “jumping out of balconies.”

That image stayed with me until I finally tried LSD four years ago, at 60. My mother’s words had primed me for an intense, near-violent experience, but the subtle waviness in the air and in my mind hardly matched her depiction. Was this what had frightened and fascinated me for five decades?

Many of us Boomers grew up with the “drugs are bad” messaging. If we got past the admonitions and experimented with these forbidden substances, it was with our high school or university friends. We certainly didn’t tell our parents about it, let alone do it with them. If they found out, they freaked out. When I was 16 and my mother discovered the bag of weed in the back of my closet, she held a serious family meeting with aunts, uncles and in-laws. I felt like a criminal on trial. Technically I was a criminal, since cannabis was outlawed in 1923.

Akwasi Owusu-Bempah, a professor of sociology at the University of Toronto and director of research for the Campaign for Cannabis Amnesty, connects the criminalization and vilification of mind-altering drugs to race and social issues. “In Canada, the proposal to make opium illegal came on the heels of the completion of the CP railroad, largely by an Asian workforce,” he explains. And the war on psychedelics “had to do with anxieties about communism fuelled by Vietnam War protesters.”

The Pursuit of Happiness

While laws and attitudes stifled psychedelic drug research in the late 20th century, Owusu-Bempah says it never completely stopped. “Persistence from researchers is what ultimately rekindled society’s interest in these products.” One of them is Carl Hart, a psychology professor at New York’s Columbia University and author of the 2021 book Drug Use for Grown-Ups. At the beginning of his academic career, Hart hoped to save his own Black community from illegal drugs, but discovered only a minority of users grow dependent on them. The more research he conducted, the less sure he became of their harms.

In the book, Hart returns to the theme of happiness as an inalienable right — and drugs, he maintains, make people happy. His own drug of choice is heroin, which he first tried in his 40s and still uses occasionally, without apparent ill effects. “The feelings — forgiving, open, tranquil — produced by the drug … inspire me to be a more empathetic person,” he writes. “Heroin enhances my ability to feel.”

When I read this passage I felt my body tense up: My early anti-drug education (or what Hart might call indoctrination) makes the very word crackle with danger, conjuring an image of an addict in a back alley. But Hart insists that most heroin users are responsible citizens.

If Hart’s stance seems a little out there, nobody can accuse Michael Pollan, author of the pro-psychedelic 2018 book How to Change Your Mind, of imprudence. Almost 60 when he first tried LSD, Pollan describes himself as a reluctant psychonaut, to use the new term for people who seek altered states for spiritual purposes. “I am more a child of the moral panic about psychedelics than a child of the ’60s,” he has stated. “It was not easy for me to go to the places that [LSD] took me.” Pollan, who published a follow-up book this year about opium, caffeine and mescaline called This Is Your Mind on Plants, has shown us oldies that it’s possible to be square and cool at the same time.

This sea change is reshaping the family dynamic. While more anxious and protective of their grown children, today’s aging parents are also more friend-like. We talk to our adult kids. We share. A shared drug experience slides easily into this mould.

It felt natural and unforced for Katrina, a 64-year-old Toronto resident who didn’t want to use her real name here, to try the South American medicinal brew ayahuasca with her 30-year-old daughter last year. “She was concerned about my mental health and wanted me to try something different,” says Katrina. “She had already tried ayahuasca on her own and had glowing reports, and my research convinced me it could be done safely.”

The shaman-led group ceremony didn’t quite deliver. “I threw up a lot, but didn’t have any life-changing revelations,” Katrina recalls, admitting that her daughter’s disclosures about her love life brought some discomfort. “They’re things a mother doesn’t need to know, and I can’t unhear what I heard.” She has no regrets, though.

“I like that we trusted each other enough to do this together. That’s a big thing.” To people considering a similar experience, Katrina advises keeping expectations low. “It’s like a cruise,” she says with a laugh. “It may not change your life, but you’ll probably have fun.”

No doubt Hart would approve. You don’t need to grab the psychonaut label to justify experimentation with psychedelics, he argues in his book:   Having fun is a perfectly reasonable objective. It’s all good.

Don’t Try This at Home

Except when it isn’t. About two hours into our family MDMA trip, Hugh rolled up his left sleeve and pointed to some scars on his forearm. “I used to cut myself as a teenager,” he said matter-of-factly, as though he were talking about a TV show he used to watch.

“I had no idea,” I mumbled, thinking back to the tall, handsome teenager who had lived with us throughout his high school years and played bass in a rock band.

“How could you not see he was in pain?” my own son shot back.

“You were too busy with your own navel to see what was in front of you.”

The accusations continued to fly: obtuse, clueless, out of touch. The door slammed as the three young adults left the house, leaving my husband and me sitting on the sofa with harsh words ringing in the air. And what were these raindrops splashing onto my lap? It was far from good.

When I describe the scene to Montreal psychologist Joe Flanders, he expresses little surprise. “An intense experience like that can create reactivity and resistance, and when you fight against it things can get complicated quickly,” says Flanders, who heads a cross-country team of therapists at Numinus Wellness, a Vancouver-based company promoting the evidence-based use of psychedelic drugs.

Not that Flanders opposes the family-tripping idea. “I’m not condoning any illegal activity. But if a family decides to use psychedelics together, with the right preparation, it can be tremendously enriching and can help the generations be more curious about each other,” he says. This preparation would include a guide to help the family talk about their intentions, establish a safe and comfortable environment, and articulate ground rules ensuring lots of freedom for family members to move in or out of group activities and discussions. “It doesn’t have to be esoteric or New Agey,” Flanders hastens to add. “It’s just helpful to have some structure to contain the experience.” Which is a polite way of saying don’t do what my family did.

Even so, I don’t regret the experience. Although it brought the maggots out in full force, the opportunity to acknowledge their existence, without the usual filters, drew some of the tension out of our family force field. The worst had been said. We could now connect more authentically.

Flanders also notes that psychedelics can offer unique benefits to older people. “There’s strong research suggesting that substances like  psilocybin [found in “magic mushrooms”] can help confront the challenges around mortality and meaning in later life,” he says. And don’t forget winter, adds Owusu-Bempah. “I know people who use mushrooms to stave off the Canadian winter blues.”

As a health writer, I would be remiss if I left out a cautionary disclaimer: Psychedelic and “hard” drugs are illegal. They also come with medical risks, especially when purchased on the street, where they could be laced with contaminants. (In our case, my daughter said she had a reliable supplier, and we trusted her judgment.)

“If you have a predisposition to hallucinations, a hallucinogen like psilocybin could make it worse,” explains Valerie Taylor, head of psychiatry at the University of Calgary’s medical school and a researcher with its Hotchkiss Brain Institute. Taylor, who studies new treatments for mental illness and is recruiting for the university’s brand-new Psychedelic Research Chair — the country’s first — views these products in a more sober light. “It can be dangerous to combine them with some prescription medicines or with alcohol,” she notes.

The escalation to problematic use and dependence can’t be brushed aside, either. A 2020 report from the Canadian Centre on Substance Use and Addiction attributed 277,060 hospital admissions and 751,356 lost years of life to substance use in 2017. Also in 2017, the costs of substance use to Canadian society rang in at an estimated $46 billion, including $20 billion in lost productivity.

These sobering figures serve as a reminder that psychotropic drugs can mess with the mind.  Even so, Owusu-Bempah expects psychedelic and “hard” drugs will continue to gain acceptance.

“With all the promising research and the companies seeking to bring these medicines to market, it’s only a matter of time before they’re legalized,” he says. Even heroin? “Yes. I think the opioid epidemic will be a key catalyst
for decriminalization.”

Taylor, for her part, “would be surprised if recreational use of these drugs gets legalized any time soon. Look how hard it was to legalize cannabis.” That said, “it looks like we’re moving forward with drugs like psilocybin as treatments for specific medical conditions, though we still have a way to go.”

In the meantime, if you decide to experiment with psychedelics, either solo or with the fam, learn from my mistake and do it the right way: with a plan and a structure.

A version this article appeared in Oct/Nov 2021 issue with the headline “Family Tripping,” p. 58.