How Overturning Roe v. Wade Could Have Wide-Reaching Implications in Canada 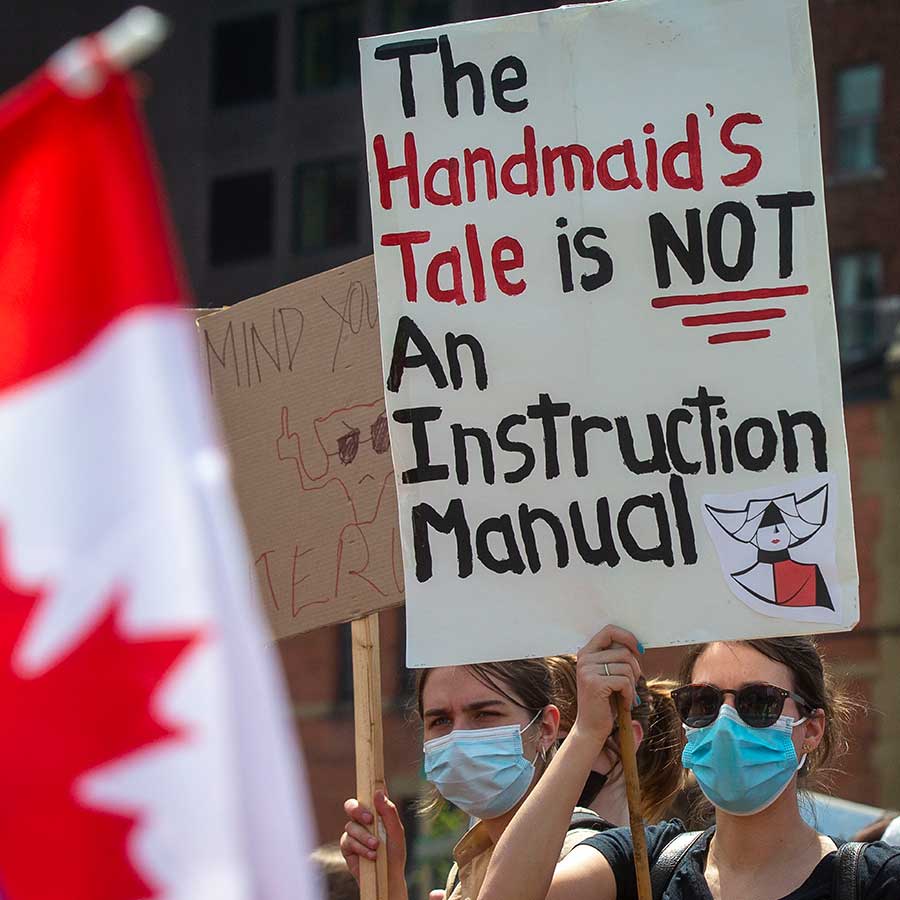 Counter-protester hold signs on Parliament Hill ahead of the March for Life in Ottawa, Ontario on Thursday May 12, 2022. Photo: Lars Hagberg/The Canadian Press

On Friday, the United States Supreme Court overturned Roe v. Wade, which ensured a constitutional right to legal abortions across the country. While many in the U.S. shared their thoughts, Canadian leaders also reacted to the ruling. Canadian Prime Minister Justin Trudeau called the news “horrific” and added “No government, politician, or man should tell a woman what she can and cannot do with her body. I want women in Canada to know that we will always stand up for your right to choose.” Federal NDP leader Jagmeet Singh called it “a dark day” and a “50-year regression in human rights, bodily autonomy and a woman’s right to choose” while Canada’s Minister of Foreign Affairs Mélanie Joly said that, “This reversal of decades of hard fought gains will endanger the lives of women across the United States and jeopardize further rights. We must remember that no country is immune.”

To that end, many have questioned what ripple effects the overturning of Roe v. Wade could have for countries like Canada. Here, we revisit an examination of the issue by Candace Johnson, a Professor of Political Science at the University of Guelph, written in late May following a leak of the Supreme Court opinion that would overturn Roe v. Wade.

After a U.S. Supreme Court opinion indicating Roe v. Wade could be overturned was leaked earlier this month, there has been a lot of discussion about how it will impact Americans. But this will also have wide-reaching implications outside of the United States.

U.S. policy decisions are influential beyond their borders. While the fall of Roe v. Wade would not immediately create legal changes in other countries, there will certainly be spillover effects.

In Canada, this might mean continued limited and uneven access, a real problem in some parts of the country. It would also likely embolden anti-choice politicians and activists, even though the vast majority of Canadians supports a woman’s right to choose.

Roe v. Wade is the 1973 Supreme Court decision that established a right to abortion. Despite the fact that the majority of Americans support pro-choice positions, the overturn of the decision has seemed inevitable for years, maybe decades.

According to a recent public opinion poll by Leger, 74 per cent of Americans support abortion, yet 29 per cent of those claim that this support applies only in certain conditions.

That same opinion poll revealed that 28 per cent of Americans believe Roe v. Wade should be overturned (56 per cent believe it should not).

Foreshadowed by increasing abortion restrictions, such as parental notifications, mandatory ultrasounds, counselling and waiting periods, targeted regulation of abortion provider laws and the recent appointment of justices during Donald Trump’s presidency. The draft opinion confirmed what many people expected: Roe v. Wade would be overturned.

The opinion contains several contentious points of law — is there a criminal justification for abortion in the Common Law tradition? Are constitutional protections for abortion consistent with “ordered liberty?” It also contains troubling social commentary on the (mischaracterized) racialized dimensions of abortion and modern developments that have seemingly created a set of conditions for women so advanced that abortion should be unnecessary.

But this sort of reasoning is not a reflection of reality. Abortion is always necessary.

So even with the removal of the constitutional protection offered by Roe v. Wade, and the ability of individual states to make their own laws and impose restrictions, demand for abortion will not decrease.

Potential Implications in the U.S.

When Roe v. Wade falls, which is expected to be this summer, there are 13 states with legislation waiting to go into effect that will ban abortion with very limited exceptions. And several other states are expected to ban or severely restrict abortion as soon as constitutional protections are removed.

While many women will be forced to travel across state lines to access abortion — barring those who can’t leave family, jobs or can’t afford to — some will travel across international borders to Canada or Mexico in order to have the procedure done.

According to the Centers for Disease Control and Prevention, nearly half (42.3 per cent) of all abortions conducted in the U.S. in 2019 were medical.

A 2021 Mexican Supreme Court ruling decriminalized abortion throughout the country. And while it is not yet legal in all Mexican states, a broad range of pills are widely available and affordable.

Americans are accustomed to travelling to Mexico to access affordable medical treatment that is out of reach in their own country. Overturning Roe v. Wade will have some Americans looking to Canada as an option.

In Canada, abortion is safe and legal, but not always widely available. And there is concern that the spillover effects of overturning Roe v. Wade might make the fragile existing system even worse.

During the last federal election campaign the Liberal government promised to improve access to sexual and reproductive health and rights, including abortion, but so far there has been little to show for it.

Last week, in response to the leaked opinion, the federal government announced $3.5 million in new funding for two initiatives to improve access to abortion. The federal government also withheld money from New Brunswick’s health transfer for its continued refusal to fund surgical abortions outside of a hospital.

This sort of token investment and minor enforcement of the Canada Health Act is largely symbolic, but $3.5 million is simply not enough to have any real impact and punishing New Brunswick does little to affect policy decisions at the provincial level.

While health is a right, the provision of health care falls into the jurisdiction of the provinces. This results in uneven abortion access across the country.

According to Action Canada for Sexual Health and Rights, there are 49 abortion providers in Québec, 38 in Ontario and 24 in British Columbia. But there is only one provider in the Northwest Territories, as well as one in Prince Edward Island and one in the Yukon. There are also no rural providers across seven provinces and territories.

The overturn of Roe v. Wade would likely not mean that a similar judicial decision is forthcoming in Canada, or that federal legislation, in the short term, would erode access.

The Liberals have supported reproductive choice and denied state funding for anti-choice groups, the Bloc Québécois is decidedly pro-choice and the Conservatives seem to want to avoid or underplay abortion. Both the NDP and Green Party are officially pro-choice, although it took the Greens time to come to this as an official position.

The impending fall of Roe v. Wade will embolden people who are anti-choice and it is conceivable that the end of constitutional protections for abortion in the U.S. will fuel pro-life groups to fund projects elsewhere.

The denigration of reproductive rights in the U.S. might permit provinces that are not doing enough to ensure access to maintain the status quo. Roe v. Wade demonstrates that reproductive rights are fragile, often insufficient and in need of protection everywhere.

Margaret Atwood’s ‘Unburnable’ Edition of ‘The Handmaid’s Tale’ Sells For $130,000 at Auction