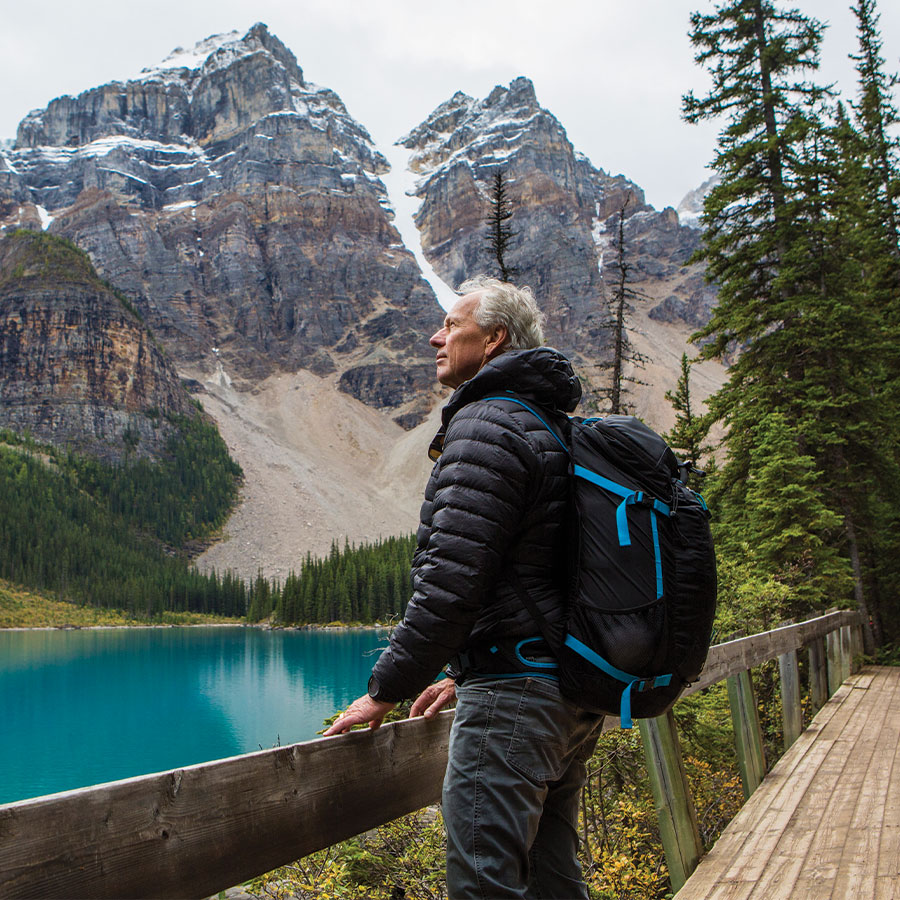 Researchers have found that "awe walking" — which involves looking for or cultivating awe on your daily stroll — can help boost happiness and foster connection with others. Photo: Steve Smith/Getty Images

As many of us plan to make better fitness a resolution for the new year,  walking is an easy way to add some exercise to your regime, but it can also be beneficial to your mental health. Here, we revisit our 2021 story on the benefits of “awe walking,” a practice that involves becoming more aware of and cultivating moments of awe during your daily stroll.

Five minutes’ walk from home, in the first spring of the pandemic, my dog and I crossed a playing field where teams didn’t play anymore. All I meant to do was take a shortcut to the park, but a marvel stopped me. The water fountain, where water was no longer on offer, held three shiny apples. Whoever placed them there had the eye of an artist and the heart of a Good Samaritan. Hungry people had been roaming my Toronto neighbourhood in search of food. One of them would soon take the apples, but first I snapped a photo. I’d been struggling with another kind of hunger — for astonishment, for beauty, for the sense of being swept up by something greater than my anxious, COVID-weary self. The accidental still life nourished me. I had to remember this moment.

For years, I’ve walked with an eye out for marvels. My smartphone makes it easy to record them; my dog ensures I never miss a day. I pause for the spider web that glistens like a necklace, for the bee exploring a coreopsis, for the bouquet of peonies abandoned on the sidewalk. In the long months of going nowhere, this habit became my superpower. Jews ask at the Passover table, “How is this night different from all other nights?” I asked on my morning rounds, “How is this walk different from all other walks?” On familiar city blocks, I made discoveries every day.

Science now has a name for this ritual of mine —  “awe walking” — and researchers are proving the benefits. According to a U.S. study published in September 2020, awe walking not only makes us happier, it fosters gratitude, compassion and admiration, the prosocial emotions that bind us to others. When the popular press picked up the study, I realized I didn’t have a superpower after all. I had something better: a community.

The study zeroed in on older adults. Lead author Virginia Sturm, a neuroscientist at the University of California San Francisco, was looking for a simple, accessible way to keep people engaged by stimulating prosocial emotions. While most people seem to get better as they age at tuning in to the positive and screening out the negative, some of us become prone to loneliness and anxiety in our mid-70s. Most anyone, anywhere can take a walk. An ordinary walk has been compared to a wonder drug, with well-established health benefits ranging from weight control and depression relief to reduced risk of diabetes and cancer. Sturm set her sights on emotional benefits. If walkers learned to cultivate awe, could walking be even more wondrous?

Awe is the amazement that stops you in the presence of something vast. By confounding your notion of the way things are, it lifts you into another realm of thought and feeling. A growing body of research has shown that it promotes generosity, kindness and even environmental awareness.  “When we feel awe, we don’t think about ourselves and our problems,” Sturm says in an interview from San Francisco. “We think about the larger world around us.” Awe comes naturally to children looking up at a sky full of stars, but adult life tends to undermine it. We expand our own footprint with bigger homes, shinier possessions and more “likes” on social media, but risk losing the humility and open-heartedness of what’s known as “the small self.” The good news is that awe can be learned.

Sturm and her colleagues followed 60 healthy, happy walkers aged 60 to 90, randomly assigning them to an awe-walking group or a control group. Both groups received the same basic instructions: a weekly walk of 15 minutes, outdoors, at a light to moderate pace. They could walk anywhere at all, from the woods to a buzzing urban block. They would snap a few selfies on the way and keep a record of their impressions.

The awe-walking group received bonus instructions: Tap into your sense of wonder, notice details as you go, walk in new places if you can. One awe walker wrote of an evergreen forest: “The leaves were no longer crunchy underfoot because of the rain and … the walk was more spongy now … Thought about the wonder a small child feels.” Control walkers focused on their own priorities. On the brink of a vacation in Hawaii, one thought about “all the things I had to do before we leave.”

The moods of both groups brightened in the course of the eight-week study, but awe walkers had a distinct edge on happiness. They smiled more broadly, according to analysis of their selfies. A more striking difference emerged over time. Awe walkers felt more connected to others. Not bad for 15 minutes a week.

The more they practised, the better they got. Their small selves bloomed — and their photos proved it. Unlike the control walkers, who centred every shot on themselves, the awe walkers stood at the edge of the frame, letting the background shine. This isn’t just a subjective impression; the researchers traced silhouettes and took pixel measurements. “[It was] the craziest thing we did,” says Sturm. “I couldn’t believe it would work, but it did.”

Launched well before the pandemic, the study made news as the second wave began and the world reached out for hope. Instagrammers created new hashtags,  #awewalks, #awewalk and #awewalking. In more than 20 million posts and counting, they shared finds that ranged from wildflowers in Greece to fresh snow in downtown Boston. Some marvelled at waterfalls and rainbows, others at the majesty of a cathedral or the shapely girders of a bridge. For every photo of an owl or a camel, there’s a multitude of happy dogs. Awe is wherever you find it. And awe-inspiring finds turn up in the most unpromising places.

Once, on a walk to Loblaws seven years ago, I passed one of those mom-and-pop stores where the window is always smudged and the produce out front a little tired. It never crossed my mind to stop there until the sandwich board appeared, hand-lettered in red magic marker — someone’s tribute to a landlord who had died. “Dear Curtis. I will so miss you, your smile, your hugs. If it was not [for] you, your trust, your encouragement, I wouldn’t exist. Because of you, NEW IMMIGRANTS LIKE ME CAN DREAM.” A wave of sympathy washed my mind clean of everything but Curtis and the void he left in the world. I had planned to buy avocados at Loblaws, but picked a few from the bin in front of me, just so I could tell the woman at the cash, “I’m sorry for your loss.” Curtis was gone but his gift remained — and made my day. When I posted my photo of the sign on Facebook, my friends liked the story it told about the power of an ordinary business transaction to become a life-changing friendship.

Years later, my photo sits in the digital file that holds my favourite awe-walking moments. When cruelty and discord fill the news, my pictures turn my attention to beauty and community. In an increasingly polarized world, couldn’t we all use a dose of awe? The notion intrigues Jennifer Stellar, a psychologist who directs the University of Toronto’s Health, Emotions and Altruism Lab. In one of many tantalizing studies, awestruck people were more likely to describe themselves as human rather than by traits (smart) or roles (mother). “Awe might have the power to help us see past characteristics that divide us like race or culture or ideology, and instead see our shared commonality as human beings,” says Stellar.

The science of awe has deep roots in psychology’s earliest days. As William James wrote in Principles of Psychology, published in 1890, “The greatest weapon against stress is our ability to choose one thought over another.” While you’re captivated by the wondrous, you will not be consumed by the worrisome. You will enter the restorative, rejuvenating state known as mindfulness.

In the second month of the pandemic, when going out seemed potentially lethal but staying in felt like a sentence, I attended a virtual lecture by “the mother of mindfulness,” Harvard psychologist Ellen Langer. Then 73, she zipped so fast between ideas that on my third replay I was still catching up. You needn’t meditate to be mindful, she explained. There’s one simple ground rule: “Notice new things.” I was doing that on every walk with my dog. It shook me out of autopilot, and I saw what was beautiful and real right now, instead of what I’d always seen before. “Life only consists of moments,” said Langer. “And if we make the moments matter, then our lives matter and our days have been well spent.”

Last May, as Toronto began to open up, I took my dog to the meadow at the edge of a park that used to strike me as drab. That day a swath of dandelions had turned it gold. I thought of the field of daffodils that inspired William Wordsworth, a prodigious walker, to write his famous poem I Wandered Lonely as a Cloud — one I first encountered in Grade 8 English. As a cynical 13-year-old, I couldn’t get excited about “fluttering and dancing” flowers. As a grateful awe walker, I finally understood. More than 200 years after Wordsworth found the daffodils, his poem magnified the awe that pulled me through lockdown.

A version this article appeared in the Oct/Nov 2021 issue with the headline “Walk This Way,” p. 48.