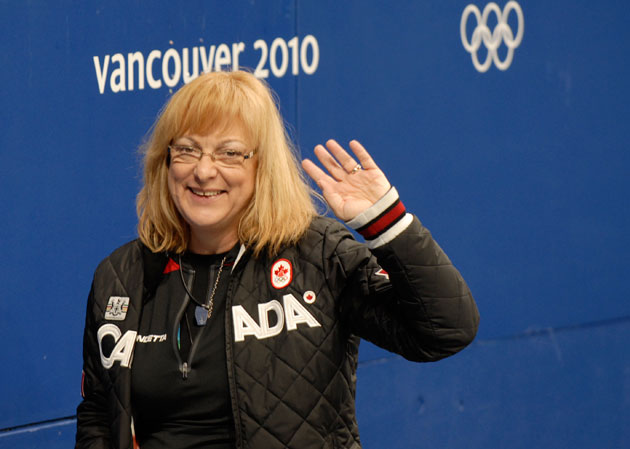 Elaine Dagg-Jackson at the 2010 Winter Olympics in Vancouver, BC

At 58, Elaine Dagg-Jackson is getting ready for her fifth Olympics. But the national women’s curling coach is just as excited about Sochi as an Olympics virgin would be.

“Every time is brand new because you’re living it through the eyes of young athletes who have never been there before. It’s always amazing.”

How does it feel to be a boomer who’s surrounded by thousands of the highest achieving young, fit athletes from around the world?

“It really makes you want to feel like you want to show up in good shape,” she acknowledges with a laugh. “A lot of the support staff are a little bit older and you have to wear the same athletic wear that the athletes are wearing. So you really have to have your ‘stuff’ together.”

That’s not much of a problem for Dagg-Jackson. “I’m pretty active,” she says. “I move around a lot. I don’t really curl anymore because I’m on the road all the time. But I ski in winter and water ski in summer. I walk and sometimes go to the gym.”

Meanwhile, she says, “The competitive sport is becoming younger because they have more time for training. You have to put your whole life on hold to train for the Olympics. People in professional careers in a later stage of life can’t always do that.”

The oldest person on Canada’s Olympic team is Jennifer Jones, 39. Ryan Fry, 35, is the oldest curler on the men’s team.

Also, says Dagg-Jackson, “Curling is very physically challenging. But there are some boomers who would be capable of competing at this level.”

She notes that Russ Howard, who won a Gold Medal at the 2006 Torino Olympics, turned 50 during the Games, making him the oldest Canadian ever to win a Gold Medal.

How important is it for Canadian curlers to get the Gold in Sochi? How much pressure?

“In curling, Canada always expects to be on the podium,” she says. “And if you don’t win the Gold, people in Canada are sort of asking, ‘What happened?’ “

Nevertheless, she admits, “We are extremely respectful of the competition this year. Every country has improved so much since Vancouver. We are completely aware that this will be the toughest Olympics for the women. But we have a very experienced team with Jennifer Jones.”

As for the risks of being in Sochi, she says, diplomatically, “It’s always an adventure to go to a foreign country. There’s always a surprise or a distraction. We don’t know what it’ll be, but there’s always something. You have to maintain a good mental focus on being able to look at options and make decisions quickly.”

She adds, “We always have really concise plans (regarding security) and this time it’s a little more intensive to make sure it’s a really solid, tight plan.”

That includes, she says, “being more in touch with each other to ensure plans are in place.”

Dagg-Johnson will fly to Sochi Tuesday from Switzerland where the curling team has been training. The 16-member team — 10 athletes, 2 team coaches, 2 national coaches, a team leader, scouting coach and media coordinator — will remain in Sochi until the 24th.