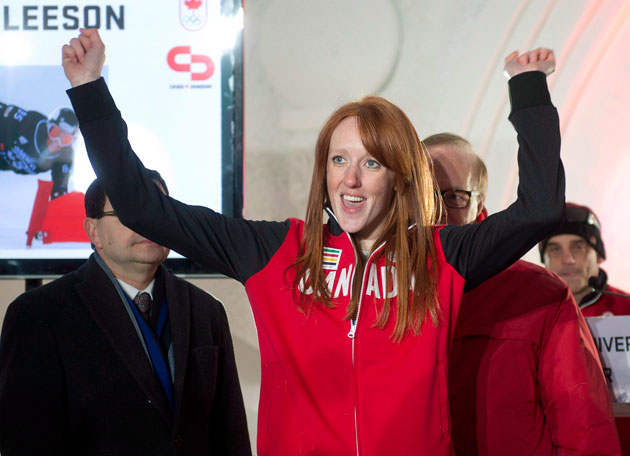 Marianne Leeson of Burlington, Ont. reacts after receiving her team jacket and being named to the Canadian Olympic snowboard team in Quebec City,, Tuesday, January 21, 2014. THE CANADIAN PRESS/Jacques Boissinot

The challenge for Burlington’s Lin Leeson, 56: packing for a flight from Moscow to Sochi that has a baggage limit of 20 kilos.

The challenge for her daughter, Marianne Leeson, 25: controlling her flight down the mountain in the Olympic snowboarding event.

Lin Leeson’s trip to Sochi is part of a 12-week voyage that begins near the Italy/Austria border, where the Canadian snowboarding team is training. It ends in Whistler after visiting family in England.

“We’re just going to have to go shopping there,” says Lin. “And Marianne can bring stuff home. She has a massive luggage allowance.”

Lin and her husband Steve, who retired this month as a Toronto firefighter, have always been huge fans of the Olympics.

Marianne, she says, “had a dream to go to the Olympics since she was a little girl.”

The youngest of four children followed her siblings up the slopes on family ski trips and was fearless on snow from the start.

“She was doing the black runs (the most difficult) at the age of 4,” her mother recalls. “She never had a lesson. She just took to it. When she was 10, she borrowed a board, went to the top of a black run and then announced that she didn’t want to ski race anymore. She just wanted to snowboard. At 15, she was invited to join the provincial team.”

But as with almost every Olympian, it’s not just the talent and determination of the athlete that gets them to the world event.

Olympian parents — there should be a special word for them, too: Olymparents — make it possible.

The Leesons, British expats, opened Creekside Bed and Breakfast in Burlington (www.stayburlington.com) ten years ago to help pay for Marianne’s training and travel.

“Marianne couldn’t have done all this on fireman’s pay,” says Lin. “The B&B has been a great source of income. We’ve had people from all over the world and we often visit our ex-guests. We really enjoy it.”

Just as important as the funding for their daughter’s sport is their emotional and psychological support.

“We give her a lot of hugs,” says her mother. “We tell her we believe in her. And she knows she can show her emotions to us.”

Marianne’s goal,” says Lin, has always been to get to the Olympics.

“But obviously she wants to do well. We had that conversation with her: ‘Just the fact that you’re an Olympian is a huge achievement.’

Marianne’s best showing so far has been 9th on the world circuit.

“I think she’s got a shot,” says her mother. “She’s doing better. And she’s very good when she doesn’t have a good result. You’d never know she’s disappointed. She would never show it. But when she thinks everyone’s asleep, sometimes I hear her having a little weep.”

Lin adds, “We tell her the ups and downs are part of the process.”

And if there’s no radio in her Sochi hotel?

“I’ll drink wine or take a pill. Or all of that, all combined.”