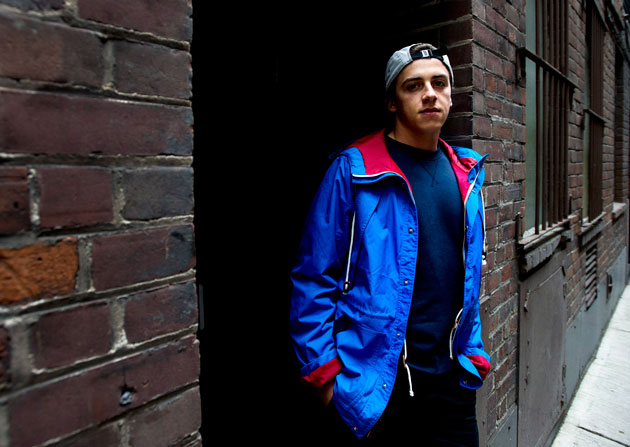 It’s a long way from Saskatchewan to Sochi but boomers Don and Cindy McMorris are getting there by snowboard. Their son’s snowboard, that is.

It’s the first Olympics experience for the McMorris family.

It’s also the first Olympics for their sport: snowboard slopestyle.

If you don’t know exactly what that is, just imagine hurtling down a 2,083-foot course with three insane jumps while performing freestyle tricks over an assortment of pipes and rails.

You can see what that’s like in a video of Mark’s slopestyle prowess featured on the front page of Friday’s New York Times.

Now imagine being a parent watching your son, who recently broke a rib, twist and turn high in the air before setting down safely on his board.

Already there have been concerns by boarders training on the Sochi course about its dangers.

After a Norwegian boarder broke his collarbone on Monday, the height of the jumps was reduced by about six feet (1.82 m).

The risk is not a concern for Mark Morris who told journalists, “It’s not too dangerous at all.”

But his American rival Shaun White, who won halfpipe gold medals in 2006 and 2010, admitted that it was “a little intimidating” and dropped out of the event.

Nevertheless, winning the first ever Olympic Gold medal in slopestyle, with his parents watching, is exactly the kind of challenge Mark McMorris finds irresistible.

Despite the risk. Despite the broken rib he suffered a couple of weeks ago in Colorado at the X Games where he won silver after finishing with a fracture.

For two years in a row, the hard-driving 20-year old athlete won gold at the X Games. But the accident has cast some doubt on what he can do at Sochi.

“He was ranked number one, the favorite prior to his injury” says Don, “but with a major fall going into it and a broken a rib, anything can happen.”

His dad’s biggest worry? Whether Mark would make it through the first qualification round on Thursday, a day before the opening ceremony.

In fact, Mark didn’t make it through that round and will be competing again to get into the final.

“Once he’s in the final, there’s no nerves,” he says, “It’s making sure he gets to the final.”

For Cindy, there’s a different worry.

“She’s worried about injury,” Don says. “I don’t think about that so much. I’m just worried that he isn’t going to do as well as he wants. He has been on top of the world and wants to stay there.”

So how does a kid from Regina reach the top of the world?

Don and Cindy had a lot to do with it.

Don played hockey and encouraged Mark and his 22-year old brother Craig to be active in sports, including hockey and volleyball.

“There always been a bit of sibling rivalry,” says Don, “but they’ve become more supportive as they got older. They would both say they wouldn’t be where they are today if it weren’t for their brother.

That competitiveness, Don believes, helped spur them on to achieve more than they would have otherwise.

“It’s not something you groom someone for,” Don explains. “They snowboard ‘cause they love it.”

As the boys became more serious about the sport, even giving up hockey, Don made sure there was a drop in their backyard for them to practice on.

“Mark has excelled at it more than I could have imagined,” he says. “We realized, when he was 15 and winning international competitions, that he had a great opportunity.”

When slopestyle was designated as a new sport for Sochi, says Don, “We realized we might have an Olympian on our hands.”

He’s just as proud of his 22-year old Craig, who will be doing the commentary on CBC for the slopestyle event.

“When Craig calls Mark’s run at the Olympics,” says their father, “that will really be something.”