The Sochi 2014 Olympics: The Year Canada Came To Win 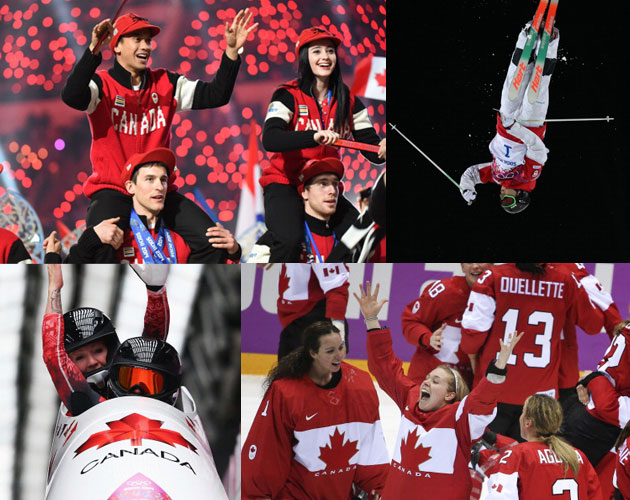 It was a thrilling ride for Canada’s Olympic team at the Sochi 2014 games as our athletes brought home 25 medals (10 gold, 20 silver, and 5 bronze) placing us third in the overall standings behind Norway and Russia. Some may be disappointed that we fell short of our Vancouver 2010 showing (where we raked up 26 medals, including 14 golds), but to me it’s obvious to see that the Own the Podium initiative is indeed working. And outside of the official stats, this Olympics will be remembered for the way it roused our (ordinarily) modest nation into bona fide, flag-waving, “We’re in it to win it!” sports fans.

We rallied behind our Olympians in a way I can’t remember in recent history (Olympic chatter usually consisted of, “Oh, did we medal at all? No? Well, it’s the effort that counts”). This time around we came ready to rumble and our men and women did not disappoint. The men’s and women’s hockey teams brought home gold, proving once again that “our game” should stay that way. Although Patrick Chan mouthed “I’m sorry” to the cameras after his silver finish in the men’s skating competition, he’s ultimately our golden boy on the ice–cute, charming, articulate and on his way to endorsement deals I would hope. Jennifer Jones, one of the nation’s most decorated curlers, finally touched down on Olympic ground for the first time and claimed the gold to mark the occasion. From snowboarding to ski-jumping, Canada was a force of nature not to be reckoned with. And outside of the competition, our Canadian values shone through as well (speed skater Gilmore Junio selflessly gave up his spot on the ice so that teammate Denny Morrison could compete–and win silver–instead). Though Sochi had its fair share of controversies and distractions (an atrocious anti-gay political agenda, claims of bribery and corruption, and revolutionary smoke wafting in from the Ukraine), it was, if nothing else a grand moment of pride for our young nation. The hashtag #WeAreWinter created by the Canadian Olympic Committee was not only a brilliant marketing campaign, but a bold proclamation to the world that although we may be peace-loving types, we don’t eff around when it comes to cold weather athletics. We don’t just own it, we are it.

So be proud Canada, we did well (and yes, it’s okay to gloat about it, too).