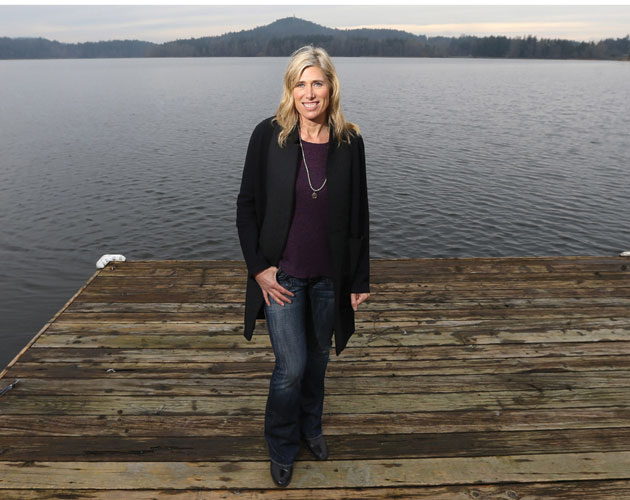 Olympic careers wrapped up, Silken Laumann and Simon Whitfield tell Jayne MacAulay they can’t stop moving. Neither should you.

Simon Whitfield stands upright on the ocean off Victoria almost daily now. As he transitioned from full-time international-level triathlete, he discovered the joy of stand-up paddle boarding (SUP), especially the solitude and the opportunity to listen to audiobooks. “I call it my therapy,” he jokes, adding, “It’s surreal [out there]. I’ve seen sea lions, seals, eagles and whales.”

Winner of the first-ever Olympic gold medal in the triathlon (at Sydney, Australia, in 2000), Whitfield ended his international-level athletic career after his fourth Olympiad, at London in 2012.

“I don’t train anymore. I exercise,” Whitfield points out. “And I feel much better if I stick to a routine.” Part of that involves family fun – runs with his wife, Jennie, in the hills of a local park, often with their four- and six-year-old girls. A giggling four-year-old makes a useful weight on Dad’s back to intensify push-ups or uphill hikes.

About three hours before exercising, he fuels up, noshing on avocado with sea salt or perhaps chia cereal and nuts, soaked overnight in the refrigerator for digestibility.

Before a run, Whitfield, now 38, rolls a lacrosse ball under each foot to loosen and stretch the tendons. A foam roller used on hips, calves and other areas helps release tight muscles and relieve trigger points more effectively than stretching. After a 40-minute run, he repeats the rolling – all part of a consistent routine of nutrition, exercise, and muscle and connective tissue release.

An Australian coach once torpedoed his sports supplements and protein shakes recovery regimen. “He gave us chocolate milk instead,” Whitfield marvels. “It was the greatest thing ever!”

Best within 30 minutes of exercising, chocolate milk has the protein, carbohydrate and fluid needed to rehydrate and refuel muscles, and it keeps hunger at bay until he stops for a meal – salmon, asparagus and quinoa, for example.

Over 12 weeks in 2015, the Olympian will train the winner of the Recharge Rewards contest sponsored by the Dairy Farmers of Canada to run in either the Mississauga Marathon or the Blue Nose Marathon in Halifax. The Olympics may not be your ambition, but Whitfield suggests sussing out an activity that’s “manageable, attainable, enjoyable and repeatable.” Commit to a routine and then do the best you can.

Silken Laumann, 49, believes there’s no age limit on dreams or goals. “That’s what keeps us excited about life,” she says.

However, it’s doubtful many of us could emulate the rower’s goal-conquering determination after suffering a catastrophic leg injury just 10 weeks before the 1992 Olympics in Barcelona, where incredibly, she won a bronze medal. (A silver followed at the next Olympics in Atlanta, and she retired from competition in 1999.)

Laumann has gone from action on the water to being in the water, building on swimming skills by learning to swim lengths. “It’s incredibly good for the brain, later in life, to try something you’ve never done before,” she says.

As well as yoga or indoor workouts, she adds long weekend cycling rides, cross-country skiing in winter, walking or kayaking by her oceanfront home at Victoria. “It’s a hardship for me to be inside all day. I definitely notice a change in my mental state when I spend time outside,” she adds. “I feel like exercising and moving is right up there with eating and sleeping as far as a daily need.”

In Unsinkable: My Untold Story (HarperCollins), Laumann admits to flirting with anorexia and self-cutting as a teen, a way of exerting some control over her life. Rowing, with its powerful, vibrant women offered a healthier perspective, but it wasn’t until after her athletic career ended that extended counselling taught her that she’s “perfectly imperfect,” just like everyone else.

As self-criticism gradually withered, replaced by understanding and self-love, issues with her own body image melted. Now as a partner in Multi-Grain Cheerios’ WorldWithoutDieting.ca, Laumann encourages women to stop using the word “dieting,” since two in five normal-weight young girls are dieting, influenced by family members on weight-loss diets. (Dieting, she also worries, may be jeopardizing bone density and the ability to prevent or fight cancer in women 40 and older.)

For more than 10 years, Laumann’s been an international board member for Right To Play, a global organization founded by another Olympian, Norwegian speedskating icon Johann Olav Koss, who is now based in Canada. She has witnessed the transformative power of play in improving children’s health, overcoming religious and cultural differences, bettering communities and in changing attitudes toward women.

“The work I’ve done over the last decade has been focused on getting kids active and healthy in countries around the world, sometimes the most disadvantaged in the world,” she says. Closer to home, she’s the GoodLife Kids Foundation’s Champion, encouraging activity and healthful eating in adults, important role models for their children. The foundation funds such initiatives as Boys and Girls Club running and healthy body image programs.

The rowing accident left Laumann with muscle, tendon and ligament damage that will probably need more surgery once yoga fails to keep her leg straight. “I’d love to be wearing four-inch heels,” the popular keynote speaker, author, and life coach says wryly. “There are lots of things I can’t do, which is frustrating – but I think there’s way more that I can do.”