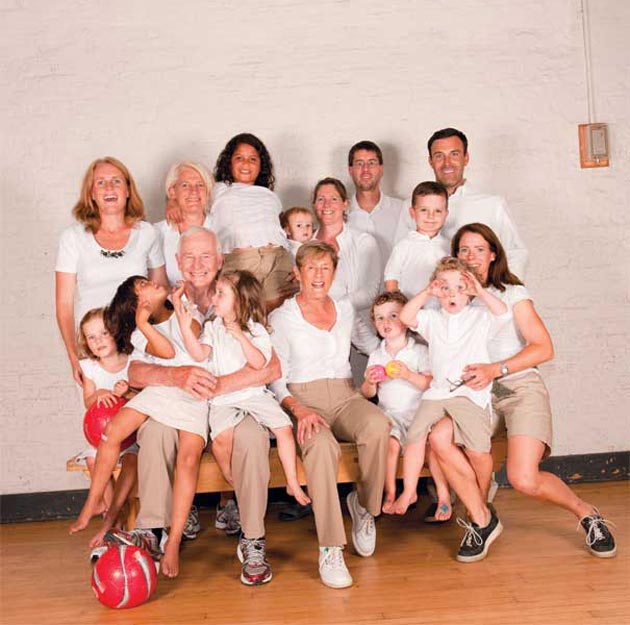 This week David Johnston stepped down as 28th Governor General of Canada, passing the baton to former astronaut Julie Payette. Here, we flashback to our 2013 interview with then  Gov. Gen. David Johnston et sa famille.

Thunderstorms were imminent on the cold, blustery day I arrived at the Citadelle to meet the Governor General of Canada, His Excellency the Right Honourable David Johnston, his wife, Sharon, four of their five daughters and a slew of grandchildren. My mission was to uncover the fitness secrets of this healthy, happy, active family. I had visions of Kennedy-esque football games in the sparkling sunshine. But the weather wasn’t co-operating. It was foreboding. The sort of icy wind and dark sky that made me want to curl up on the sofa with a good book and a cup of tea. Then again, I’m not a Johnston. If I were, I would have seen a silver lining in those grey clouds and decided to, I don’t know, go for a 10K run or even try my hand at zip lining.

You see, the Johnston clan isn’t your average family. Then again, David Johnston is far from average. Most Canadians are familiar with his academic accolades – degrees from Queens, Cambridge and Harvard plus honorary doctorates from more than 20 other schools. He’s the author of 24 books. And, yes, he’s been awarded the Order of Canada, too.

But what is less well-known about our current Governor General is that he was a high performance athlete in hockey in college, where he was twice selected for the All-American team at Harvard and was named a member of its athletic hall of fame. He also dabbled, no doubt skillfully, in football and baseball. Even when he graduated and continued on his brainiac trajectory, athleticism and leading an active lifestyle remained paramount to him. It didn’t hurt that his spouse has degrees in physical and occupational therapy and rides dressage. In other words, she’s no slouch in the exercise department either. Is it impolite to mention brawn and brains when discussing a man of 72, who is also the Queen’s representative in Canada?

“Physical activity has always been important to me all the way through my life, and when I ceased playing team sports at the end of my university days and we began to have a family, both of us adjusted our sports so they could be family sports and that continues today,” he explains, sitting on a sofa inside a private living room in the Citadelle of Quebec City, a military fortress and one of the official residences of the Governor General. “I can recount the last three or four days, and they would be different activities but a fairly good level of intensity.”

He isn’t joking. The day we met, he had burned up about a thousand calories in the gym. But previous few days included a five-kilometre run on the Plains of Abraham with Sharon, as well as zip lining with the whole family and an 80-kilometre bike ride on the Trans Canada Trail in south Quebec City. I’m exhausted just listening.

“It’s part of our life,” he explains simply when I ask how he managed to get the whole clan on board the fast train to fit. “My wife and I have been active people from the time we were very young, and it’s transmitted to our children and now to our grandchildren. We also believe an active life makes for good families and good communities, good society.”

While not an official part of his platform as Governor General, which includes philanthropy and volunteerism, learning and innovation, family and children, fitness certainly plays a large role in his life philosophy, particularly in the latter category.

“From the time they were 12, we had a place at Tremblant. Every weekend, we skied. So it just was a way of life from the time we got up in the morning,” Mrs. Johnston explains, sitting on the same sofa, a crisp white shirt lending an air of regal elegance. “We weren’t hyperactive people but being active was just part of what we were.”

That was then. Today, Mrs. Johnston is quick to point out that when it comes to being active at an older age, every person is different in terms of his or her ability to get out and do something. Sadly for many, it’s not always an option. “It’s all about health. I can say this and that; you know I’m very sporty at my age and so forth but we’ve got good health and we use it. We’re in that age group where some of our friends aren’t healthy,” Mrs. Johnston explains. “They’re unwell. They’re sick, not unmotivated.”

Both admit that if your health is in good order, keeping motivated to be active comes down to taste. “I think the key is to choose those activities that you enjoy to try to ensure that physical activity and active lifestyle is a part of the joy of life, not just another bloody task that you have to undertake because someone says it’s good for you,” Johnston says.

Exactly how did they find an activity that suited such a large brood? “We run. Our family has participated in all of the Terry Fox Runs that I can remember, so that goes back about 30 years or so,” he explains. “And in the next Terry Fox run in September in Ottawa, we’ll again have three generations as we have had for five or six years. Swimming has been a very big part of our life and water activities. And, of course, skiing has been a big sport. We have a ski hill about 15 minutes from Rideau Hall where we currently live, and typically once a week during the winter months, I go on a weeknight for an hour and a half to ski under the lights at Camp Fortune. We also skate on the [Rideau] Canal and we also have a rink at Rideau Hall, the oldest rink in Canada.”

As our conversation comes to a close, we shake hands. And as they walk out the door, I’m left feeling like the laziest person on earth. Then into the room come the Johnstons’ daughters, Debbie, Alex, Sharon and Jenifer. The fifth and youngest, Catherine, was at home with a newborn baby. Any way you slice it, the Johnstons are what is known in England as a “sporting family.” The four sisters are energetic – not to mention very successful career women – about the active life they were raised with and how their parents have influenced their own parenting style. Clearly the phrase “the family that plays together stays together” isn’t just an old wives’ tale because these sisters are close – they banter and finish each other’s sentences.

“I think the first thing that our parents got us into was running, usually running away from them, trying to get into trouble,” jokes Jenifer, daughter number four and an economist for the federal department of the environment. “My dad was quite a strong runner. When my mom had her fifth child, she was struggling with staying in shape, and her doctor recommended running. She got into it like she gets into most things and became a really good runner and brought us all along. My sister Sharon did a 10K or half marathon at eight or nine.”

“That’s family folklore,” corrects Sharon jovially; she is daughter number three, a family doctor and a associate scientist at the University of Ottawa faculty of medicine. “It was a 10K, and I got lost and ended up doing the men’s 20K.”

“Running was one thing, skiing was another,” says Debbie, the eldest, who is senior counsel at Public Prosecution Service of Canada. “Right from an early age, they would schlep us into the car at 6 in the morning. This was pre-seatbelt era, so five us would be lying in the back asleep, and they’d drive two hours to the ski hill once a week during the winter.”

“I think it’s key that there wasn’t a choice in the matter,” explains Jenifer. “So -20 or -30, we were going out skiing. Then at a certain age, it was just what we wanted to do.”

“Unlike now where you’d be putting your kids into sports teams and driving them to games,” says Sharon.

“We were the sports team,” laughs Alex, the second born, who is executive director of the Canadian office of Catalyst Inc., a non-profit that seeks to advance women in business.

“It kept us out of trouble,” Jenifer says.

“I was always in trouble with the ski patrol,” Debbie admits.

“But bobbing down the hill versus robbing the local convenience store,” Jenifer points out.

“I feel for our parents because TV wasn’t a big reality so you were going to do other things. As kids, we’d be outside playing,” says Alex. “With our kids now, it’s a more conscious decision because there are so many competing interests. At the time, I didn’t think of my parents as role modelling, but now I see them as role modelling.”

“We’re missing one thing in this picture,” Jenifer says suddenly. I assume she’s about to say “our husbands” but she doesn’t. “The dogs. We grew up with dogs, and that means no matter what, we were always getting out. There’s always a minimum threshold.”

They laugh when I point out that I was expecting “husbands” or “partners,” but then all four get serious and admit they couldn’t have such intense careers, children and yes, dogs and be as active as they are without the help of their other halves.

Then it is time for conversation to end and playtime to begin. Off we go to the barracks gymnasium. The planned outdoor activities were abandoned, thanks to the ominous thunderclouds, but the Johnstons are unstoppable as are the adorable children dashing toward the gym. Once inside, the grandparents wrangle the family, and now their sons-in-law have joined and a hockey net is procured as are various pieces of sports equipment. Then it’s a free-for-all. Complete, unstructured play that includes makeshift soccer, hockey, wheelbarrow-racing and just plain fun. And as I watch the faces of the children and the adults, I see the sheer joy that is had by running off steam, yelling and screaming solely because its fun to holler, and then I see the elder Johnstons’ faces, watching. Older, wiser but vigour is as much theirs as it is their grandchildren’s.

“I think to some extent aging is a state of mind,” Johnston tells me. “I think we can organize ourselves as we face the different realities in the chapters in our life so that we enjoy them to the fullest.”