Ask the Experts: ‘Keep Fit and Have Fun’ With Tips from Hal Johnson and Joanne McLeod 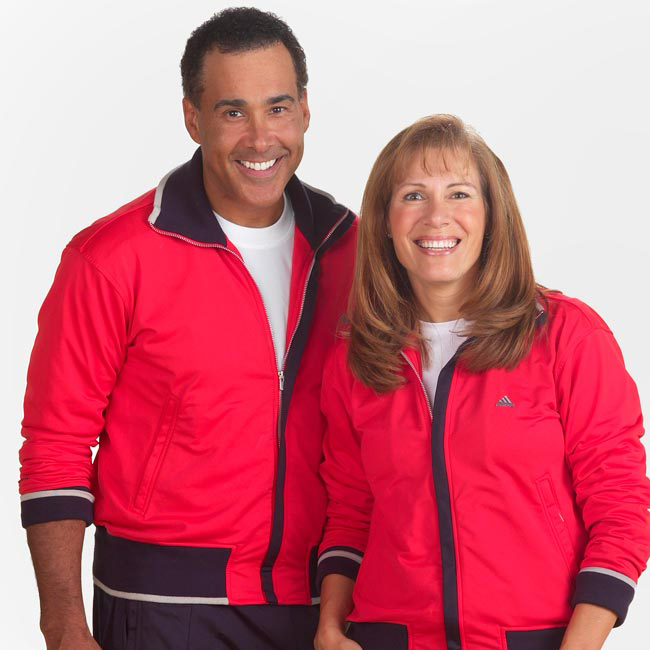 All the while, an oh-so-familiar jingle plays. I’ve just completed a BodyBreak.

Joanne McLeod is leading a group gathered in a small auditorium at the Toronto Central YMCA. Joining her is partner (and, yes, husband) Hal Johnson. In matching track suits, both are beaming with big smiles – their slogan is Keep Fit and Have Fun, after all. Those in attendance – some media but mainly Y members, mostly of a certain age, match the smiles with their own.

The couple is presenting their latest initiative, WellnessQ, They liken it to IQ but a measure of health and lifestyle rather than intelligence. As a form of prevention, they encourage keeping immunization up-to-date and have partnered with GlaxoSmithKline, makers of such vaccines as Twinrix and Shingrix.

Their talk takes us through five steps in total, to improve well-being – something they seem to have in spades. Other than a peppering of grey and a few fine lines and wrinkles befitting their age – 59 and 61, respectively – the duo seem just as fit as when they first hit TV screens. That would be 30 years ago this year.

Admittedly a little star-struck, I got a chance to chat with the famed fitness pair.

TL: How do you feel about your fitness now versus 30 years ago?
JM: For me, I think I’ve hit another high in my fitness regime. It’s a much more well-rounded approach. I look back on competing [she ran track competitively] and at that time it was one-dimensional. Whereas now, part of it is that I only have so much time left [laughs]. But I’ve been inspired to try something new. I’m preparing for the Ironman this year and last year I started swimming. And it was new and it was scary. But you take that first step, the first step is always the hardest. Now I’ve got the biking. And I’ve got the swimming and the running. It allows me to throw in a hike because I know, physically, I’m fit. We’re going to be going golfing next week, and I’m fine. I know my back is going to be fine.

HJ:  I’m still 14 or 18, mentally. Joanne would agree [laughs]. I realize that I look at life and think, “What am I going to play?” I’m just going to play stuff. We’ve got three speaking engagements in Alberta over a 10-day period, and there’s a gap so we said, “Let’s go down to Vegas!” Take our golf clubs. Take our bike seats. Take our clip-in pedals and rent bikes. We’ll ride in the morning. We’ll golf in the afternoon and then we’ll throw a hike in there. So we’re going to Vegas as a training camp.

TL: Even though you’re older now, your message is really multigenerational.
HJ: I’ve often said that people eat from the same trough. Why is this family all overweight? Because they are all eating the same food. And all doing the same lifestyle. We often think, it’s about 30 per cent your genes and 70 per cent your lifestyle. The genes are a good copout. “I can’t do anything about this. It’s my genes. That’s why I’m 300 pounds. Or that’s why I have Type 2 diabetes.” Well, there are many things that you have the ability to prevent. That’s kind of where our message has always been. In a sense, forget about your genes because you can’t do anything about them. Focus on what you can do, not on what you can’t control or change.

TL: In the presentation, you also touched on how exercise can be social.
HJ: I play hockey three times a week in Huntsville. The guys are all 55-plus. The big thing is they all go to Tim Hortons afterwards for about an hour and a half Even some of the guys that didn’t go to hockey will come out. We sit there and chat away. Even my dad, who is 86, said he couldn’t get to our place until 11:30 this morning to take care of our dogs because today is the day he meets his golf buddies. They keep it going. And depression is such a big thing as they age, from the loneliness.

TL: Was doing The Amazing Race [2013] intimidating?
HJ: No. Because what I thought was others would have a hard time and get frustrated with things. Whereas I go, “I never do things right the first time anyway.” So I never get frustrated.

JM: And also, we realized that there are certain skills that we developed. Like the U.S. Amazing Race had people sewing. Well, I’ve sewed. I’ve knitted. I’ve done all of that. And those are skills that are being lost over the generations. We felt we had a different skill set than some of the younger groups.

HJ: We still think we could have won [laughs].

TL: Joanne, you talked about having rheumatoid arthritis, and that moving more helps. What else do you do?
JM: The biggest thing, with a tennis ball or a smaller ball, you just exercise the muscles. Again, if your hands are muscularly strong, they will allow you to do things. One of the biggest things for people as they get older is muscle mass loss. They become weak. Everyday things, like carrying their groceries, becomes difficult. And I’ve often thought that with being an empty nester, you’ve got all this time to travel. But you have to be physically fit because these airports that you’re in are … you’re walking for kilometres! So even doing simple things, like push-ups for your arms. You know the whole body, it’s important because you’re going to lose it if you don’t use it.

TL: What’s your go-to, food-wise? Or the thing you miss if you don’t have?
HJ: I have a tendency – I could be on Survivor – I can go all day without eating. And I’ll also eat anything. On the Race, if there was a food challenge, I’d eat it! But I find that if I don’t drink enough water, I get a headache and I start to get dehydrated. I have to remember to drink regularly. Water is really the No. 1 thing for me.

JM: And for me, I’ve had to deal with – after turning 50 – food intolerances. I’ve had to be more mindful of food. But I turn to bananas an awful lot. You know it’s natural. It’s that almost perfect food. And it allows you to get the potassium that is so important for our muscles and muscle functioning. And it comes in to play with the hydration. That’s been my go-to when I need a little something. And you know we all have our vices. It’s okay. When you’ve been putting in your time and making sure that you’re taking care of yourself, a treat is okay – occasionally.

JM: And that’s WellnessQ tip three. I think the fact of having that “I can” attitude plays a huge role in everything that you do. And there’s just so much out there to experience that if you don’t have a healthy mind and a healthy body, you’re going to miss out. People fear doing things sometimes. My biggest fear is not being able to do things. It’s a huge motivator for me. I just go, “I don’t want anything to do with a hospital, people taking care of me …” That’s that fire that keeps me going.