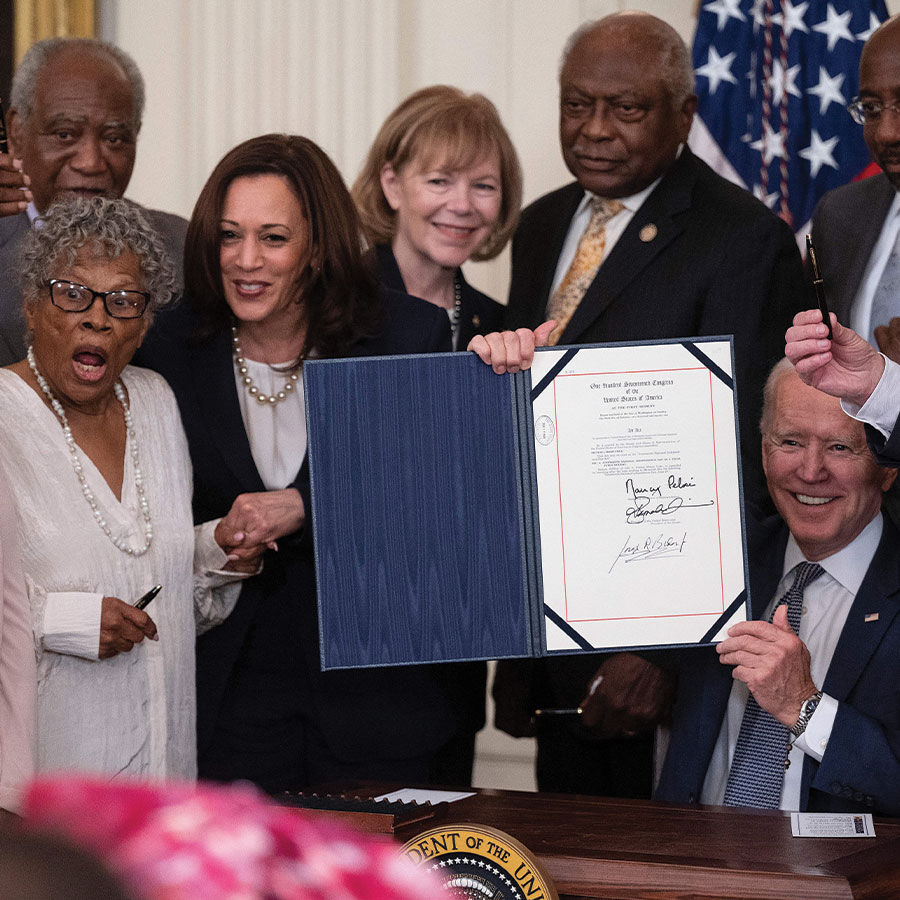 After Juneteenth — the name given to June 19, the anniversary of the day in 1865 when news of the Emancipation Proclamation outlawing slavery finally reached Galveston, Texas — was granted federal holiday status in the United States on Thursday. U.S. President Joe Biden, at the bill-signing ceremony in Washington, approached 94-year-old Opal Lee, took her hand, and kneeled before her in gratitude.

“We’re blessed to mark the day in the presence of Ms. Opal Lee. As my mom would say, ‘God love her,’” Biden said during his speech at the ceremony. “A daughter of Texas and the grandmother of the movement to make Juneteenth a federal holiday … She’s made it her mission to see that this day came. She’s walked for miles and miles, literally and figuratively, to bring attention to Juneteenth. To make this day possible.”

Lee stood beside Biden as he signed the bill. He then gave her the pen.

The story of Opal Lee and her incredible mission to get Juneteenth recognized as a federal holiday in the U.S. is a fascinating one — especially when you consider that on Juneteenth 1939, 82 years ago, Lee and her family were forced to flee from their home in Fort Worth, Texas, after members of a racist mob set it ablaze.

The mob, it should be noted, numbered 500 people according to news reports from the time. Five hundred people “storming,” as one report put it, the family of four — Lee, her parents and her brother — a Black family who, the racists decided, had violated their white neighbourhood by virtue of their very existence within it.

The fire, on the fourth day of protests followed days of rock hurling at the family’s home as well as breaking and entering to steal furniture to burn in the street. Opal Lee’s family had been living in the house for less than a week.

As MSNBC’s Rachel Maddow pointed out on her show this week, police were on the scene for virtually the entire time the mob was there. And not only did the mob get away with violence, vandalism and, ultimately, burning the home while in the presence of police, no arrests were ever made.

“My dad came home with a gun, and the police told him if he busted a cap, they’d let that mob have him,” Lee, now 94, recently recalled in an interview with Variety. “If they had given us an opportunity to stay there and be their neighbours, they would have found out we didn’t want any more than what they had — a decent place to stay, jobs that paid, [to be] able to go to school in the neighbourhood, even if it was a segregated school.”

Opal Lee and her family escaped and did the only thing they could do — they did their best to move on with their lives. Lee grew up to become a teacher, activist and charity worker, all the while celebrating Juneteenth in her Texas community and also joining the National Juneteenth Observance Foundation.

It wasn’t until Lee reached the age of 89 in 2016, however, that she decided to take her biggest step toward gaining national recognition for Juneteenth.

“I was about 89. I’m pushing 90. And I don’t see anything that I’ve done and I feel like there’s something more that I can do,” Lee recalled in an interview around that time with ABC News. “My idea was to walk from Fort Worth to Washington, D.C., and that surely somebody would notice a little old lady in tennis shoes.”

Her plan was to speak directly with then-President Barack Obama — America’s first Black president — about making Juneteenth a national holiday. She even, as Maddow pointed out, wrote Obama a letter ahead of time, “essentially sort of warning him in the nicest way possible that she was going to come to Washington … and the point of her trip would be that this Texas holiday, Juneteenth should be celebrated all over the country. It should be a national holiday marking the end of slavery, not just a Texas holiday.”

So the 89-year-old put on her sneakers and began walking two-and-a-half miles a day — a distance symbolizing the two-and-a-half years it took news of the Emancipation Proclamation to reach Texas after it was signed by President Lincoln — toward the nation’s capital. She began the 1,400-mile walk in September 2016 and four months later, flanked by supporters and press, arrived in Washington. Ever humble, she told Variety that she didn’t walk the entire distance but did walk “hundreds” of those miles.

The Will of One Becomes the Cause of Many

Lee didn’t get the national Juneteenth holiday that she wanted in 2016, but she never stopped pushing for it. She saw how few people knew the history of Juneteenth, so she continued her campaign. Celebrities like actress Lupita Nyong’o and music superstars Sean “P. Diddy” Combs, Pharrell Williams, Usher and Niko Brim helped amplify her cause, and Lee planned to return to Washington in 2020 to deliver a petition, boasting 100,000 signatures, supporting her cause to Congress.

She ended up collecting more than 1.5 million signatures.

Lee, in a statement at the time, thanked all those who’ve helped spread her message and added that the movement is “more than one little old lady in tennis shoes who believes Juneteenth should be recognized as a federal holiday. I truly believe Juneteenth is a unifier and can be the bridge that brings people together to talk about the hard issues facing our country.”

Lee told Variety that she believes the 2020 anti-racism protests “helped Juneteenth go mainstream” and, following the bill signing in Washington on Thursday, she spoke with CBS News about how she believes this is just the beginning of a bigger movement toward equality in America.

“We’ve still got much work to do, and we see this as a great beginning to do something about the disparities in our country.”

Still, seeing Juneteenth get passed into law by Congress caused the 94-year-old to scream with joy. And as she told CNN host Chris Cuomo following the event, “To have it actually happen was — can I use a phrase that you would use? It was ‘off the chain.’”

She noted that she thought it would take Congress much longer to pass the bill.

“I don’t know how to describe it,” Lee added, noting her visit to the White House to watch President Biden sign the bill. “I’m humbled by it. I truly am. You just have to take my word for it. I’m so grateful. So very, very grateful.”