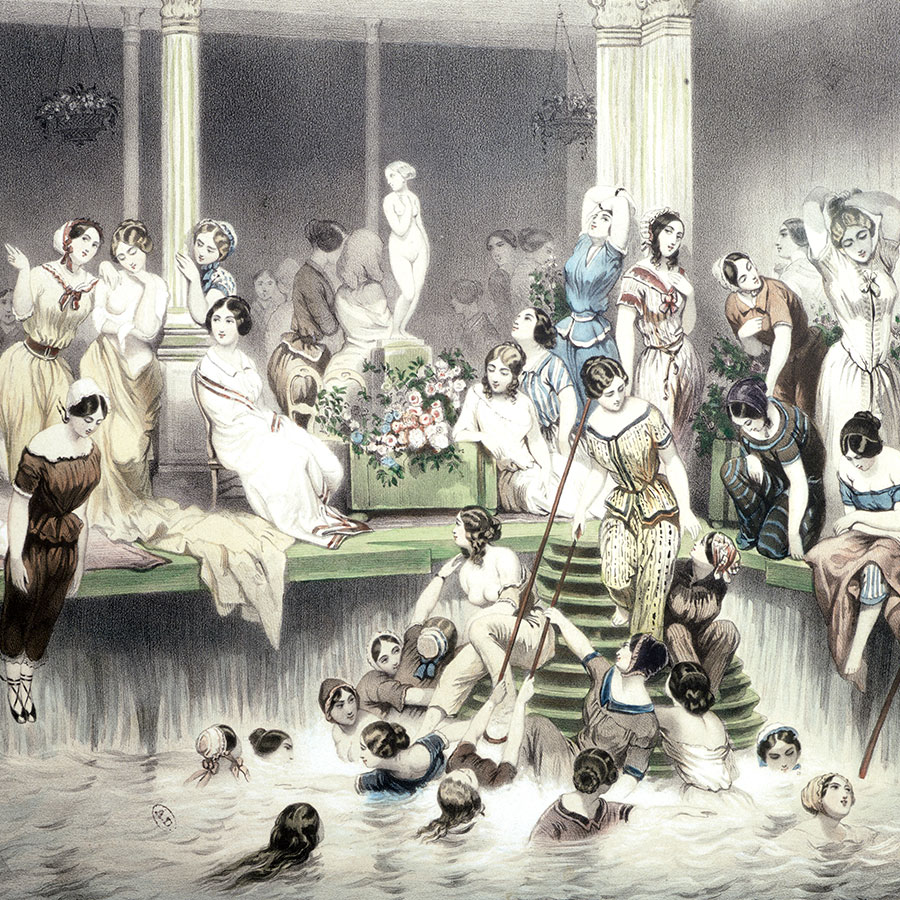 Wellness resolutions can be traced back to the early 19th century, as seen here in The baths of Hotel Lambert, Paris. Photo: DeAgostini/Getty Images

“I am resolved throughout the year / To lay my vices on the shelf,” begins “New Year Resolutions.”

In what now reads like a familiar vow of post-holiday abstinence, a young Rudyard Kipling lists the temptations of women, horses and the card game whist, pledging “A godly, sober course to steer / and love my neighbour as myself.”

According to some sources, the practice of making resolutions at the new year can be traced back 4,000 years, originating with the ancient Babylonians.

Opinions differ on the origins of contemporary wellness culture, often the packaging for self-improvement through self-denial at the new year.

As sociolegal scholar Anna Kirkland describes, wellness as a contemporary buzzword can be defined as the belief “that each individual can and should strive to achieve a state of optimal functioning.”

And this — echoing Kipling’s promise to better himself in the new year — also sounds very Victorian.

In 1859, Samuel Smiles, the Scottish journalist, biographer, social reformer and physician, published the authoritative text on 19th-century “character, conduct and perseverance” aptly titled Self-Help; with illustrations of character and conduct.

This was at the height of mid-Victorian hubris, and amid a year of epoch-defining ideas (Charles Darwin’s On the Origin of Species and John Stuart Mill’s On Liberty both entered the scene).

By the time Smiles (yes, that is his real name) died in 1904, Self-Help had sold over a quarter of a million copies in Britain alone and was an international hit.

Smiles may now be less well known than some of his contemporaries, but his thesis on “morals and manners” and belief that “national progress was the sum of individual industry, energy and uprightness, as national decay is of individual idleness, selfishness and vice” shaped the stalwart Victorian work ethic.

This made self-help, as historian Asa Briggs describes, one of the defining virtues of the era. These same ideas also helped form the ideological backbone of the wellness industry today.

Over a century and a half after Self-Help, and a week before Christmas 2022, the Toronto Star served readers “Nine wellness trends to help you kick-start the New Year.”

Unlike the Star’s wellness list, there is nothing in Smiles on the benefits of “functional fungus.”

Instead, Self-Help consists largely of a series of case studies: bootstrap narratives of successful men through history (Milton, Newton, Napoleon) who apparently rose through the ranks with strict habits and hard work.

But how different, really, are Smiles’s motivations from our own aspirations for annual self-improvement?

Smiles’s biographer John Hunter describes Self-Help’s “bite-size pieces, undemanding of readers’ time,” with its “quotability” a boon to publishers. These are similar to the easily digestible “listicles” that fill January lifestyle sections.

Personalized wellness plans may, on surface, signal hedonism over Smiles-like austerity and productivity.

But from office nap pods, to the rebranding of friendship as “therapeutic socialization,” we too have come to convert idle pleasures into future profit, just as holiday indulgence becomes fodder for a January cleanse.

While often entailing deprivation, resolutions imply the sort of quantifiable self-improvement that would meet Smiles’s approval.

Yet we tend to make — or at least are told to make — the same ones every year. Data shows that gym memberships do indeed spike, only to fall again by February, until the cycle repeats the following year.

This could be evidence of what English professor Colleen Derkatch terms the wellness industry’s “moving target.” She notes how wellness discourse promotes seemingly opposed notions of restoration and enhancement.

This means people are perpetually seeking wellness — and often spending money trying to achieve it.

But the Victorians offer more than the origins of the wellness industry’s current capitalist trap.

While I certainly do not look to 19th-century Britain expecting a road map for a fulfilled life, or to mimic the many abominable views held by men like Kipling, it’s worth noting that such writers can also provide models for unproductive fun that make the repetitive nature of resolutions a positive way to punctuate time.

In many years spent rereading the Victorians, I sometimes glimpse scraps of unproductive joy outside of the stereotypical narrative of hard work and discipline.

While never abandoning his belief that “work plenty of work is necessary for my happiness and welfare,” in Smiles’s autobiography he also allows time for rest, and even for useless recreation.

At one point, the book details how, recovering from a stroke, he replaces his reliance on work with amateur painting.

The artworks he produces “are not of much importance, but the execution of them was a great relief to me …[so] I went on cultivating idleness.”

A commitment to unproductivity, perhaps, offers another way to approach resolutions. The lapsed exercise regimen or abandoned writing project, then, are not just marks of failure, or potential targets for wellness profiteers. They can also be signs of happily wasted time.

In the final lines of his new year’s poem, Kipling flips the resolution narrative, letting his goals unravel, as our annual pledges so often do: “I am resolved—that vows like these/ Though lightly made, are hard to keep.”

Despite the cynicism, the language stays lighthearted. The form mimics a children’s rhyme — regular in meter, with each quatrain followed by a bouncy couplet.

The poem ends with a bout of numerical diversion: “One vow a year will see me through,” so “I’ll begin with Number Two.” By pulling readers back to reread the second stanza, Kipling loosens the attachment to linear self-improvement.

January takes its name from the two-faced Roman god Janus. This has long been a season of looking backward as much as forward, and not just in search of lessons, or warnings or evidence of progress.

Turning to the past also places resolutions in the repetitive time zone of ritual: playfully pointless, and without expectation of future returns.

5 Expert Tips for a Mental Health Reset in 2023