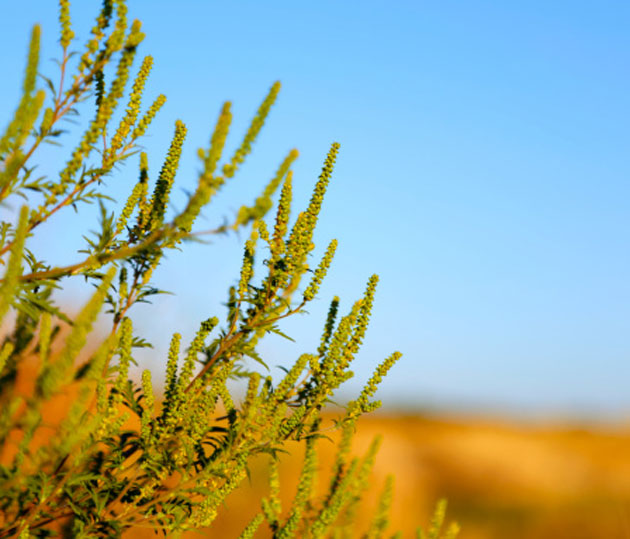 Autumn brings more than the beautiful colours! As allergy sufferers know, fall is also a prime time for sneezing, wheezing, and watery eyes. Take these steps to survive the fall allergy season

Just when spring allergies have become a distant memory, along come the itchy eyes, runny noses and general misery that signal the start of yet another allergy season.

About one third of people with seasonal allergies sufferer with them in the fall, experts say. Public enemy number one is ragweed with its pollen affecting 85 to 90 per cent of fall-allergy victims. Other triggers include household dust mites and outdoor moulds.

Ragweed, the seemingly harmless “dull yellow” flowering wild plant, usually flourishes from around Labour Day until November or the first frost of the year. Ragweed flourishes during hot, dry spells with each plant producing about 1 billion pollen grains in an average season. And because those pollen grains are lightweight, they can travel literally hundreds of miles.

People with ragweed allergies typically react within minutes of coming in contact with the pollen, while non-sufferers will not even notice it.

That other major fall allergy culprit – mould from decaying leaves, mushrooms and other vegetation — thrives in damp weather and doesn’t die with the first frost, as ragweed pollen does.

NEXT: Top Tips for Dealing With Fall Allergies

Get tested. Colds and hay fever cause similar symptoms. The big difference, according to health experts, is a matter of duration. As a rule of thumb, if symptoms persist for several weeks, it’s likely an allergy. Your doctor can give you a skin test to confirm that you have allergies and find out which allergens you need to avoid.

Leave the outdoors outside. Minimize your exposure to allergens by closing your windows (including car windows) and using the air conditioner instead. At home, your window screens can not protect you from microscopic pollen and mould spores. Allergens also have the annoying habit of sticking to clothes, so shower and change immediately after outdoor activities, and avoid drying sheets or clothes outside. When possible, stay indoors between 5:00 and 10:00 A.M., when allergen levels are highest.

Don’t ignore the signs. Research suggests that allergic rhinitis causes inflammation of the lungs and sinuses and may lead to more serious respiratory problems such as sinusitis and asthma. Hay fever can also make sufferers more vulnerable to allergic eczema and food allergies.

Skip the humidifier. While adding moisture to the air can soothe cold symptoms, using a humidifier can worsen allergies by causing rooms to become moldy. Dust mites also thrive in moist air. Reduce humidity by running your air conditioner.

Treat symptoms with medications. Nasal symptoms are typically treated with an over-the-counter non drowsy oral antihistamine or a steroid nasal spray such as Nasonex or Flonase.

Avoid foods that might trigger allergies in some people. These include foods like watermelon, zucchini, bananas and cantaloupe. Dairy products can sometimes make an allergy sufferer more congested.

Minimize outdoor activity when pollen counts are high. Consider wearing a mask if you are working in the garden or yard.

Plan ahead. If lifestyle measures, pills and sprays haven’t worked, consider allergy shots. Health experts recommend not waiting until autumn is in full swing to act. Starting immunity shots before the start of the season lets your system create antibodies and build immunity.

READ MORE
Can food fight inflammation?
15 essential items for your medicine cabinet
Dodge the dander
Allergy-proof your home for fall
Fall into fitness