When Swearing Is Good 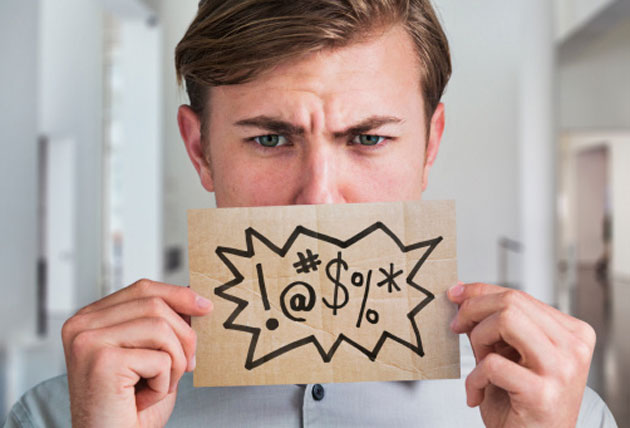 Next time you stub your toe or bang your shin, go ahead and say it: Holy [email protected]%#!

There may be a good reason why we swear when we hurt ourselves. Researchers from Keele University’s School of Psychology has found that swearing can actually have a ‘pain lessoning effect’.

The study, published in the journal NeuroReport, looked at the links between swearing and the actual experience of physical pain. Researchers had hypothesized that since swearing often has a ‘catastrophising’ or exaggerating effect, that pain would actually increase when a person swore.

However, they found the opposite to be true.

For the study, 64 volunteers were asked to submerge their hands in a tub of ice water for as long as possible while repeating a swear word of their choice. After this, they were asked to repeat the experiment, using a more commonplace word — such as ‘brown’ or ‘square’ or wooden’ — they would use to describe a table.

And despite its initial expectations, the research team found that the volunteers were able to keep their hands submerged in the ice water longer when repeating a swear word. On average, men could leave their hands in 30 per cent longer, while women increased their endurance by 44 per cent. The reason for the difference in gender may have to do with the fact that men generally swear more than women, making it a more powerful expression for women.

The pain-lessening effect may occur because swearing triggers our natural ‘fight-or-flight’ response, researchers say. When the volunteers swore, their heart rates accelerated, indicating an increase in aggression in a classic fight-or-flight response of ‘downplaying feebleness in favour of a more pain-tolerant machismo.’

“Swearing has been around for centuries and is an almost universal human linguistic phenomenon,” lead study author, Dr. Richard Stephens said in a release. “It taps into emotional brain centres and appears to arise in the right brain, whereas most language production occurs in the left cerebral hemisphere of the brain. Our research shows one potential reason why swearing developed and why it persists.”

READ MORE
Anger can kill you
10 ways to stop worrying
How to live with less
Will your personality affect how long you live?
Do your office mates hate you?